New York University professor Wendy Suzuki shared tips from her book ‘Good Anxiety: Harnessing the Power of the Most Misunderstood Emotion” on how to analyze one’s own anxiety 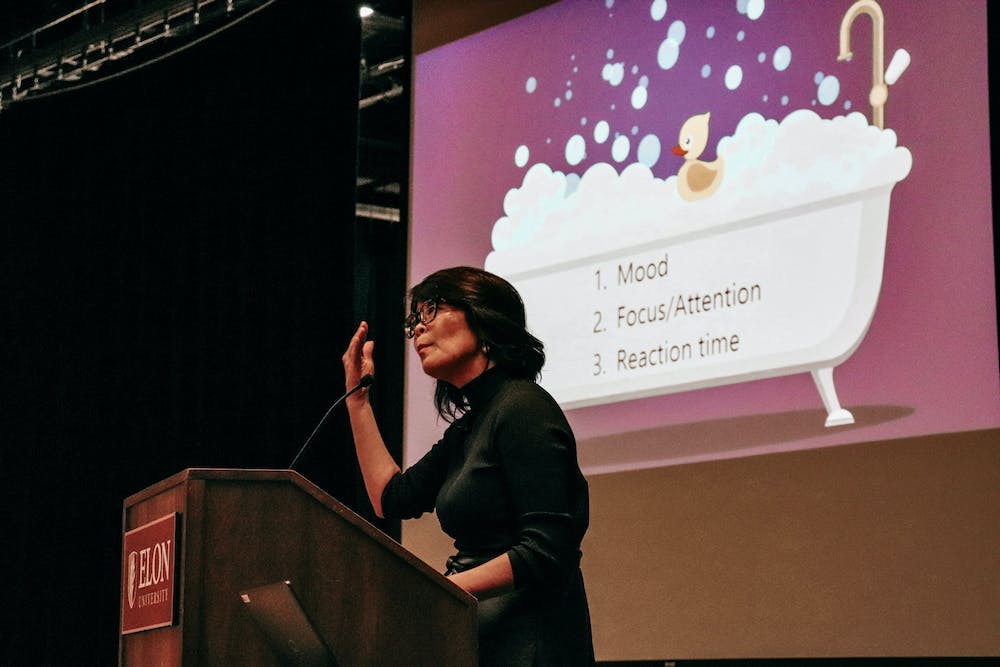 Wendy Suzuki is not only a world-renowned neuroscientist, but she is also recognized for international authority on neuroplasticity. Suzuki’s knowledge on brain functionality leads into her expertise with humans and their cognitive abilities – anxiety being a main focus.

Her 2018 TED Talk focused on the brain-changing benefits of exercise and was the second-most viewed TED Talk of that year. In May, Suzuki was named one of the “10 Women Changing the Way We See the World” by Good Housekeeping.

“Learn to turn the volume down on your anxiety,” Suzuki said.

Step one to gaining good anxiety is breath work, according to Suzuki. She led the audience in a short exercise that left the room in a tranquil state. Being steady and relaxed are two main components that can lead to a restful shift within your nervous system, she said.

Providing examples from personal experiences, Suzuki shared experiments that she had found very helpful within her own life. Along with breath work, exercise is a key component that Suzuki said was awakening. Her performance of everyday tasks, work and overall happiness started to improve after exercising. Not only did Suzuki claim people will physically see a difference, but their brain chemicals will react as well, resulting in a decrease in negative emotional states such as anxiety and depression.

“I started out with this evolutionary idea: these uncomfortable emotions evolved to protect us. So if I'm ignoring all of them, am I ignoring a way to learn more about the world?” Suzuki said.

Step two to gaining good anxiety is learning to explore those uncomfortable emotions. Suzuki said that evolving these emotions can be a safeguard, and ignoring true feelings results in regret, fear and self doubt. Learning about what one feels is vital to their overall growth and development of worldview.

Suzuki explained the superpowers of anxiety. Her top three superpowers — productivity, flow and empathy — can be applied to any feeling of worry. Helping with a summation of good anxiety, these superpowers can be practiced in any situation.

“This idea that when you're doing something at its very high level, some of the times you get into this state where everything goes well and time slows down … that’s the state of flow,” Suzuki said.

Closing this educational and interactive experience with the audience, Suzuki challenged their negative perceptions of anxiety, choosing instead to highlight the positive possibilities that come from accepting it.

“I think that we can all kind of go out into the world, happier, healthier and with a lot more empathy, compassion for each other,” Suzuki said