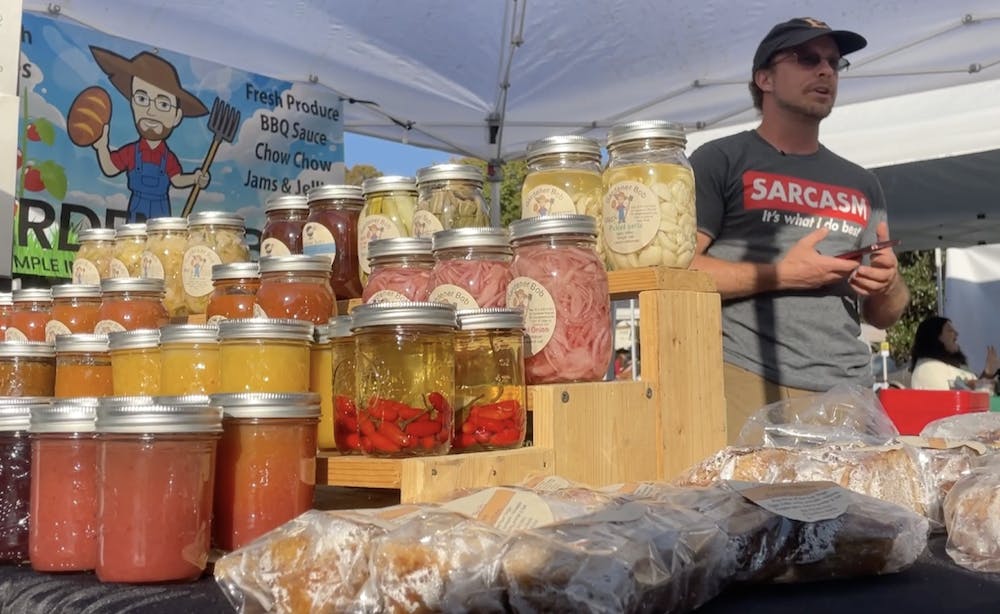 Robert Thomas, or “Gardener Bob” as Elon students know him, is embarking on his second year through local farmers markets.

In the summer of 2021, Thomas had two options: collect unemployment or find an alternative income. Thomas had worked at Elon University’s McEwen Dining Hall that year, part of a long run of culinary-related careers, and was let go for the summer months. Initially, Thomas saw his career at McEwen as an opportunity to innovate and be creative in the kitchen, but after additions to the facility like The Chicken Shack, he said the job became less fulfilling.

“In the very beginning, we were able to create a lot more, and honestly, when you’re able to create, there’s a lot more fun,” Thomas said. “The food kind of became more bland and dumbed down, and I went from creating awesome meals to grilling chicken for six hours a day.”

The same summer, Thomas began to realize the impact certain foods had on his health. Growing up, Thomas had a “bad gut” and was sick for extended periods of time. He recognized that he could better control what is put in his body if he made his own food products, and began to make drinks and food that promote healthy digestive systems.

“I started making kombucha, and I started making sourdough at the same time because I know both of those are very good for the gut,” Thomas said. “So in making those, a couple of friends were like, ‘You should sell me some each week.’”

Kombucha helps with digestion, while boosting energy and ridding the body of toxins — while sourdough bread is a prebiotic that promotes beneficial bacteria in the intestines. Combining his goal for digestive health with culinary experience resulted in the start of his brand, Gardener Bob.

At his first farmer’s market in the summer of 2021, Thomas sold $70 worth of kombucha. He eventually shifted his business to only selling baked and pickled products, but by the end of his first summer, his sales were enough to sustain an income. This allowed him to leave his position at McEwen as he began investing more time into his small business.

“No matter how much you work for somebody else, you can never find that satisfaction,” Thomas said. “I’ve gotten in the last year more satisfactory compliments about how amazing stuff was and all that than I’ve ever got working for somebody else.”

For Thomas, Gardener Bob isn’t just about the money. Thomas said it is his mission to change the community around him and help others with their own health journey. Other than sourdough bread, Thomas also sells ”gut-healthy” options, such as picked fruits and vegetables, jellies and gluten-free baked goods.

“It’s a story that I’m trying to tell,” Thomas said. “We’re all in this life to make a living, but more than just a living is making an impact on people’s health and society itself.”

Dealing with personal struggles for much of his life, Thomas said the business has become an outlet for himself. Reflecting on his past, Thomas said his personal goal of living a healthy lifestyle stems from a previous struggle with addiction.

“I was an ex-heroin addict, a drug addict. So the fact that I’m actually sitting here talking to you right now is a miracle,” Thomas said. “It’s a very small percentage of people that make it out of addiction like that.”

Students and customers can find Thomas and Gardener Bob products weekly at local markets, and his pastries are also sold at The Oak House. After two years in the Elon community, Thomas is hopeful for the future of his business and the impact he can have.