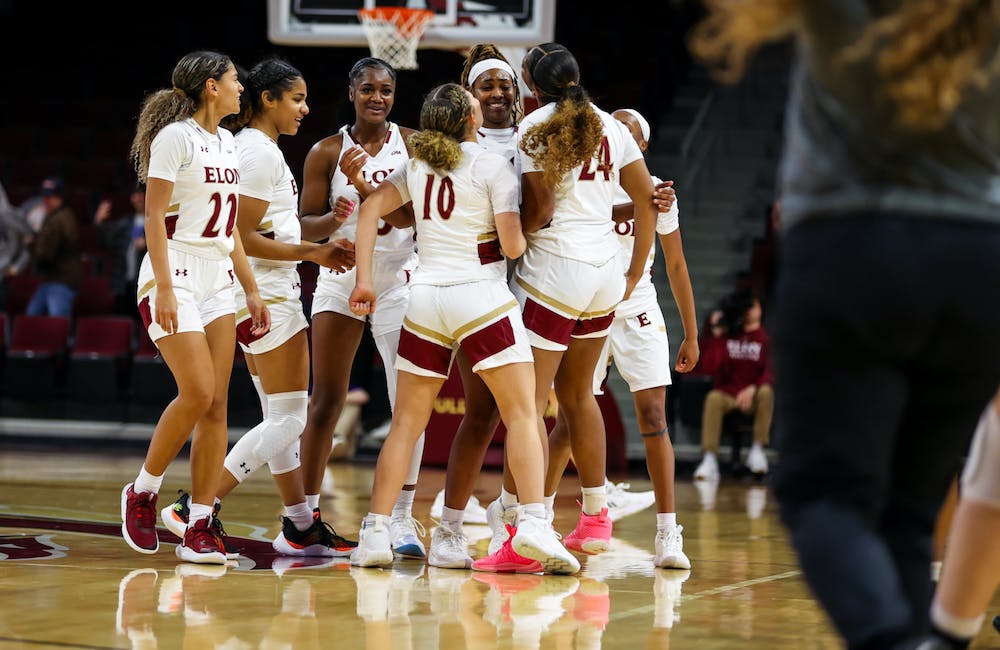 With 12.9 seconds left on the clock, the Elon University women’s basketball team and the Schar Center crowd held their breath as freshman guard Raven Preston stood on the sideline, set to throw in an inbound pass.

Schar erupted in celebration as the Phoenix emerged with a 60-57 lead.

Elon got a stop on the next possession to close out its first victory of the season.

Head coach Charlotte Smith has faced moments like these throughout her playing and coaching career, but she admitted her nerves were very much present on the sideline as the play unfolded.

“It was nerve racking for me,” Smith said. “Would the timing be good, would we be able to execute?”

As for James, she said her final shot was taken from the spot she had hoped for.

“Wide open on the wing,” James said. “I flared, and it was open so I shot the ball and it went in.”

Down the stretch, the Phoenix lost two of its most experienced players, graduate student center Evonna McGill and graduate student guard Lenaejha Evans. Both players fouled out of the game with under five minutes left. Afterward, Evans, who scored a team-high 19 points, said how important it was to continue to show support for her teammates, even if it only came from the sideline.

“Making sure I was still active even though I wasn’t in the game,” Evans said. “Just being a big supporter of everybody and being a big presence on the bench.”

From the start, Elon was able to control the paint with McGill. Smith said how much of an impact she makes and how much the team relies on her presence in the paint.

“We wanted to go inside to her, and we did that early on and she scored a lot of points,” Smith said. “We have to get her to understand we can’t afford to have you in foul trouble.”

26-23 @ElonWBasketball leads it at the half!

🏀 Bria Harmon leads the way for Elon with 7pts, 2 reb.

🏀 Nevaeh Zavala leads the way for HPU with 9pts and 1 reb.

2nd half less than 10 minutes away! pic.twitter.com/ufTgndqPa5

James said even when her teammates went down because of foul trouble, the Phoenix stayed focused and organized as a team.

“We knew we had to lock it in even more,” James said. “We were focused.”

With six new players, as well as two red-shirt freshman, Smith said it was important for her to  keep her composure so the team could perform.

“If I get super tight, then they end up being super tight,” Smith said. “I was tight, but I tried to hide it.”

While the fans might not have enjoyed the final moments, Evans said she and the rest of the team love close games that come down to the wire.

While Smith certainly was happy to secure the first win of the season, she also said there are still kinks that need to be worked out.

“There were stretches where we were not executing, and I think our shot selection was not good,” Smith said. “We got to get better at moving the ball, making the one more pass and I think we’ll be a much better team.

The Phoenix will look to use the momentum of the gritty win and keep the spirits at the Schar center high when University of North Carolina Greensboro comes to town Nov. 19.