The Nov. 2 discussion focused on changing media, bias and defamation 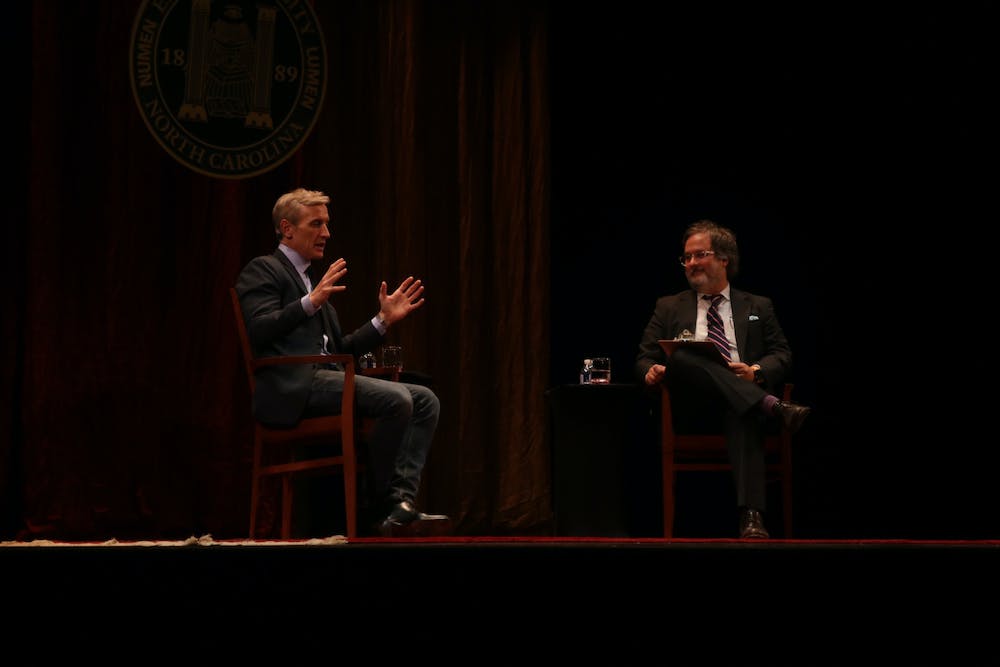 Dan Abrams spoke tonight at the Carolina Theater in Greensboro as a part of Elon Law’s 2022-23 Distinguished Leadership Lecture Series. The media entrepreneur touched on media law, defamation, and bias throughout his lecture.

Abrams, a graduate of Columbia Law School, has amassed a variety of achievements in the fields of journalism and law throughout his career. In addition to writing for the New York Times and Wall Street Journal and co-anchoring ABC’s “Dateline,” Abrams is also known for his work on programs such as “Dan Abrams Live,” “On Patrol: Live” and his radio show, “The Dan Abrams Show: Where Politics Meets The Law.”

Tonight, he spoke to the Elon Law students and the Greensboro community about his career and the importance of knowing the facts in today’s ever changing and polarizing media landscape. Abrams addressed the audience directly, telling personal stories and sharing his own opinions on the topic of free speech, bias and the law.

Elon Law professor Enrique Armjio, a fellow at the Yale Law School Information Society Project and UNC Chapel Hill’s Center for Information, Technology and Public Life, opened the conversation by asking Abrams about his opinion on bias. They discussed court cases and the fight between lawyers and the media.

“Bias is a very different answer today than it was 15 years ago. Today people have the opportunity to do research themselves, but they are too quiet to admit they’re ever wrong,”Abrams said.

The conversation then moved into Abrams’ opinion on social media and the role it plays in the lives of young people today.

“Social media has made it worse. Social media is worse in the sense that people get all of their information from there. There is no filter,” Abrams said.

To close out the Nov. 2 lecture, audience members were able to ask Abrams questions. Many asked for a piece of advice he would give to upcoming law and journalism students.

LaTaylin Maxwell, a senior at Guilford College, said he is “Dan Abrams’s biggest fan” and was looking forward to this session. He is hoping to pursue a career in law enforcement after graduation and attended the lecture curious if law school could be a good option for him.

Maxwell had the opportunity to ask Abrams about law school and said he was surprised when Abrams suggested he look at more affordable paths.

“I had a lot of professors at Guilford College telling me it's a good idea. So here's somebody that actually went to law school,” Maxwell said. “So I think that hearing him and actually getting the question answered back to me. I was amazed by his answer.”

Nonetheless, Abrams encouraged the audience to be courageous in following their passions.

“If you want it, do it … get out there and just do it. If you see a story your station isn’t covering, go cover it and submit it to them,” Abrams said. “Get yourself out there.”