Phoenix loses 1-0 to No. 9 Thundering Herd in first NCAA appearance since 2015 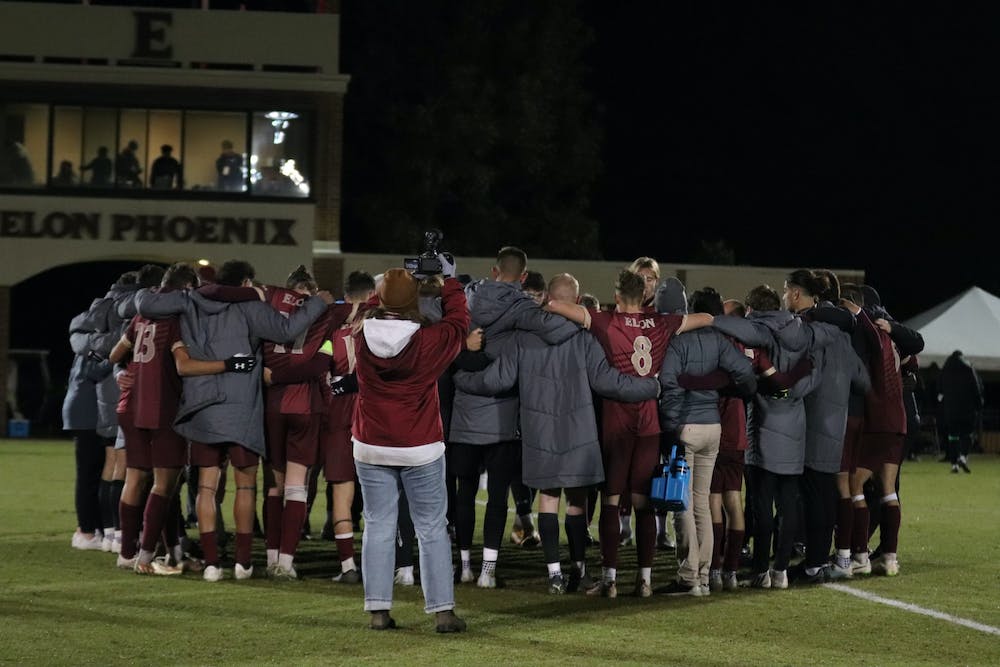 Photo by Erin Martin | Elon News Network
The Elon University men’s soccer team huddles following its 1-0 loss to the No. 9 Marshall University Thundering Herd in the first round of the 2022 NCAA Men’s Soccer Tournament on Nov. 17 at Rudd Field.

Rudd Field was flooded on Thursday night with cheering fans as the Elon University men’s soccer team finished off its season with a 1-0 loss in the first round of the 2022 NCAA Men’s Soccer Tournament against the No. 9 Marshall University Thundering Herd. It was Elon’s first NCAA Tournament appearance since 2015.

Both teams were coming off post-season conference tournament losses, making tensions high on the field. Despite Marshall winning the national championship in 2021, the Herd knew it was not going to be an easy win tonight against the Phoenix.

The Phoenix started the game with a strong defensive approach, with forwards and midfielders putting pressure on the Herd’s backline. Back and forth possessions and fouls riled up the fans and the players as neither team had got a shot on goal.

“It all comes down to chemistry,” Elon graduate student goalie Ryan Bilichuk said. “We are a very close team, and I think it shows on the field.”

The Phoenix broke the tension when junior forward Jack Dolk found himself face to face with the Herd goalkeeper, Oliver Semmle, but sent it right into Semmle’s hands.

The Herd managed to rack up nine corner kicks while possessing the ball for 67% of the first half. After attacking the Phoenix’s net repeatedly, it was in the last two minutes of the half that Marshall defender Gabriel Alves sent the ball across the goal to defender Mohammed Seidu, who headed the ball past Ryan Bilichuk and into the back of the net. The Phoenix tried to retaliate with only 1:30 left in the half but were unable to generate anything.

“That goal was a team goal,” Seidu said. “It made me feel special to score a goal like that for my team, but it wouldn't have happened if the ball wasn’t crossed and Ryan didn’t tell me there was an open space. Credit goes to my teammates too.”

Elon knew it had to come into the second with enough intensity to have a chance to catch the Herd, who started the second half leading by one. Phoenix fans understood the assignment as well, erupting from the stands over fouls, turnovers and corner kicks throughout the game.

“It’s really nice having the fans out. It gives you much more motivation and energy to play your heart out,” senior forward Mason Duval said. “We have so much support.”

Despite an aggressive, chippy game, the Phoenix rose above Marshall and continued throughout the half with great shots and play but could not find the angles to get the ball into the back of the net. The Phoenix left everything on that field, getting a final shot off with 20 seconds left in the game as Duval sent a header wide left.

“Being in the NCAA tournament, winning the regular season — now, that's the minimum for this program, now the guys know the standard that they have to live up to” Duval said. “ I definitely see a lot of success coming up for this team.”

Despite the loss, head coach Marc Reeves said he is proud of his team’s effort and is happy with how the team performed throughout the season, especially his senior class.

“I just couldn’t be more proud of our seniors, our group and everything we’ve accomplished this year,” Reeves said. “We certainly came off that field knowing there was nothing more we could’ve done. As a coach, that’s all you can ask for.”

With the loss, Elon’s season is over with a record of 11-5-3. Marshall will face the University of Virginia Nov. 20 in Charlottesville.