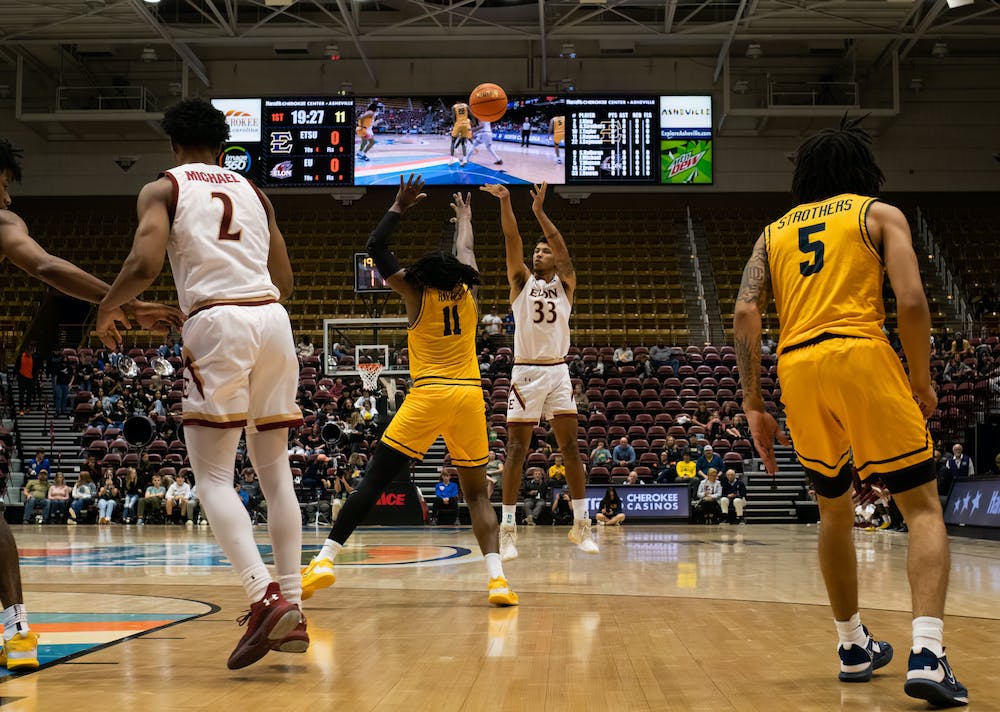 
Graduate student John Bowen III shoots a three-pointer during Elon’s game against East Tennessee State University on Nov. 11 during the opening round of the Asheville Championship at the Harrah’s Cherokee Center. Bowen III tied a career-high with 17 points in Elon’s 77-64 loss.

ASHEVILLE, N.C. – The Elon University men’s basketball team fell in a hard fought battle against East Tennessee State University in the first round of the Asheville Championship, 77-64. Head coach Billy Taylor said he is thankful for the opportunity to be here for this tournament and for his team's improvement since Monday’s game against Erskine.

“It was a great opportunity for us early in the season to see what we're made of,” Taylor said. “So, overall, some things that were positive, some movement in the right direction.”

The team had a chance with 12 minutes remaining, down only eight points going into the timeout. Taylor said the team was fueled with energy in the timeout to try and comeback.

“Well, I think it was the fact that we knew the game was in the balance, you know, and we were trying to string together some consecutive stops,” Taylor said. “We had some different combinations on the floor, and some of our younger guys, but it's a great learning opportunity for them to be out there and be able to play in that situation.”

Taylor said he is proud of transfer forward John Bowen III for how he stepped up with redshirt senior Andrew Junkin out tonight. Bowen, who is in his first year at Elon after playing previously at the University of North Carolina-Wilmington and Belmont Abbey College, finished the game 8-9 from the field and tied a career-high with 17 points to lead the Phoenix.

“He’d be the first one to tell you he didn't play well against Erskine. He was really disappointed in himself because he wanted to show better on opening night but he came back and produced in a big way for us, which was really positive,” Taylor said.

Bowen was able to find open dunks at the hoop thanks to one teammate in particular, graduate transfer guard Sean Halloran. Halloran and Bowen have played together before going back to their days at Belmont Abbey, as the two were teammates at the school during the 2018-19 season. Bowen said their connection from playing together made it easier for him tonight in his first start for the Phoenix.

“We've kind of built that chemistry already, and when he drives in, I know he's going to be ready to finish or he's going to look for me down in the dunker spot,” Bowen said. “Sean does a really great job at doing that. Me and him, we're very close off the court as well. So, we just feed off of each other and you know, just that camaraderie off the court is leading on the court, as well as also playing with each other previously at Belmont Abbey.”

It was a much different game though for senior guard Torrence Watson. After scoring 16 points on 6-12 shooting to start the season against Erskine, he went 0-7 against the Buccaneers. Taylor kept it simple though when he said what he told Watson after the game.

The team will play Harvard University on Sunday at 2 p.m. in the tournament’s third place game. Harvard lost to the University of Louisiana 75-61 in its semifinal.