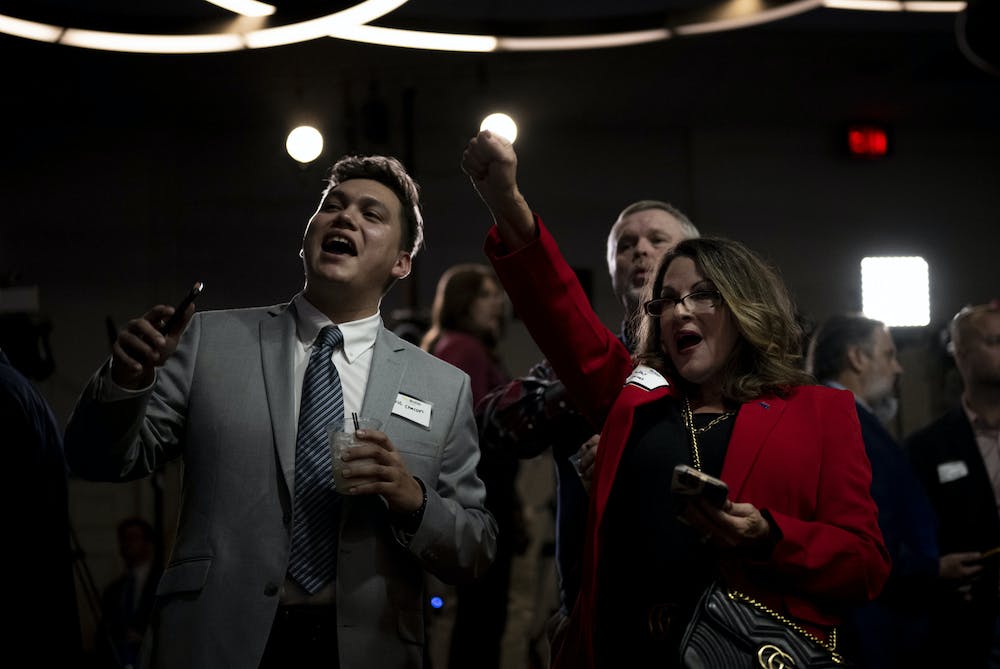 
Eric Chacon and Kathy Gaines celebrate during the Election Day watch party for Representative Ted Budd as other republican winners are announced on Nov. 8 at the Marriott in Winston-Salem, North Carolina.

Correction: A previous version of this article conflated statewide and districtwide races. The United States House of Representatives is a districtwide race. Elon News Network regrets this error.

Terry Johnson has been Alamance County’s sheriff for sophomore Tyra Duque’s entire life. On Tuesday night, Johnson was reelected to the same position he’s held since 2002.

As a low-income and Hispanic student, the Alamance County native said the influence of Johnson’s values in local law enforcement have long punctuated the looming fear she has felt for others within her Hispanic community. But Duque said until she became more politically active, she did not realize this fear was unusual or could be remedied.

This election cycle, the political science and Spanish major worked for Ricky Hurtado’s reelection campaign for North Carolina House of Representatives, and Duque said she is motivated to create change within her community.

In the Nov. 8 midterm elections, across all partisan races, Republicans won every race on the Alamance County ballot, apart from the districtwide race for United States House of Representatives District 4.

Elon professor of political science and policy studies Thomas Kerr said that even though North Carolina’s Supreme Court required the state to redistrict earlier this year before the primary elections, these new lines didn’t make many districts throughout the state more competitive and gave Republicans an advantage.

Elon professor of political science and policy studies Jason Husser said the changes within the North Carolina General Assembly will affect people across the state.

With this, Republicans are now one seat away from being able to override vetoes from Democratic Gov. Roy Cooper, which is currently the only check on an otherwise Republican led state. Husser said if Republicans are able to later obtain a full supermajority, this will have a large legislative impact.

“As long as the Republican leaders of the parties in Raleigh can keep their caucus together, they'll be able to override Cooper's veto and put legislation into effect regardless of what Democrats want,” Husser said.

Husser said that this could lead to other changes such as a statewide abortion ban. Senior Lily Kays, who uses they/them pronouns, said this —  in addition to Republican Ted Budd’s election to the U.S. Senate — is something they are worried about in terms of social issues.

According to the Elon Poll published Nov. 2, created by Husser, North Carolina voters are motivated to vote in this year’s election cycle due to these issues. The poll focused on issues of abortion, the economy and election integrity, and it found that many people have negative views of the economy going into the midterms.

Husser said many Democrats in state and local elections have tried to politically distance themselves from President Joe Biden because Biden is blamed for high inflation rates, and other candidates want to remove themselves from this issue.

“While a local school board candidate has not done anything related to inflation and should bear no responsibility for that, it will still impact on county commissioners and school board races, General Assembly seats as well as national mood is important on state and local races,” Husser said.

Despite these down-ballot trends, junior Bethany Marzella, president of Elon’s Model UN, said she bases who she votes for on the candidates’ platforms and how feasible she thinks they are. Marzella said she is not only registered as unaffiliated, but generally does split-ticket voting.

Days before the election, Marzella said she wasn’t sure who she’d be voting for yet and had to do more research on candidates. She said things that swayed her were what representatives were at the polls and how clear of an action plan different candidates had.

“I'm unaffiliated, I don't really look at the colors,” Marzella said. “I look at the people, so I don't know how mine will end up looking out. It depends on the person.”

She said that in her experience, being an unaffiliated voter can spark controversy because of how uncommon she said it is.

“The fact that I would be willing to vote for either way could be polarizing, which is weird given that it's supposed to be the opposite,” Marzella said. “People sometimes can be very strong to their party identifiers.”

“Inflation is a major issue on voters' minds in North Carolina, and most voters hold Biden at least somewhat responsible for inflation,” Husser said. “The implication of that is not particularly good news for Democrats.”

Since President Joe Biden is a Democrat and the House of Representatives has been under Democratic control, Husser said constituents are likely to hold Democrats responsible for inflation. Husser said Democrats have used multiple tactics to try and combat this.

“Democrats are trying to focus voters on issues other than the economy, inflation and also further trying to distance themselves from Biden specifically on inflation,” Husser said. “But the biggest thing on people's mind is the cost of goods is up significantly what it was a couple of years ago, and many of them hold Democratic parties responsible for it.”

According to Elon professor of economics Steve DeLoach, neither the president nor other government officials have a significant impact on inflation. DeLoach said things such as the stimulus provided by the government and low unemployment rate may impact the economy, but this does not have a large impact on inflation.

“There's nothing that the government is going to do, I think, to address inflation,” DeLoach said. “They really can't. They can do some things, like they can regulate the cost of prescription drugs or something like that. So there's some places they could help to reduce, but most of the inflation that we can address will be determined by the Federal Reserve raising interest rates over the next year or so which has absolutely nothing to do with elected officials.”

The Federal Reserve is the central banking system for the United States, and while appointed and approved by the government, operates as a separate entity.

Husser said despite the government not having a lot to do with inflation, if voters are unhappy with the economy, it will still impact elections.

“But the actual true cause, and whether or not that’s Biden’s responsibility or Federal Reserve, is only relevant to the extent that voters think that it's relevant,” Husser said. “So the key question is not so much what's the true source of inflation as much as who voters are blaming.”

Duque said that while she knows inflation and the economy are big talking points, she personally finds it hard to focus on the economy.

“I feel like inflation, like the economy, is only an issue when it hurts the middle class,” Duque said. “It's been hitting hard to low-income people for a while now.”

Duque said as a member of the Hispanic community, growing up in Alamance County has led to her having a constant fear around law enforcement. This sparked her to become more politically active in both local and state elections.

“I've just always been mobilized by the hatred I see in my town, because I’m from Graham and pretty much the only national attention we’re ever going to get, because of the Confederate statue we have in our downtown or the Confederate or KKK appearances,” Duque said. “So just seeing that in my town is really sad and discouraging.”

Kays switched their voter registration from their hometown of Indianapolis to be able to vote in person and in a place where they feel the policy will impact them more.

Kays said they care not just about the federal races, but also local elections such as the Board of Education. Social issues are very important to Kays, and both them and Duque said that there was no question that they would vote for Democrats — if anything, they both said they would like to see candidates with more liberal ideologies running for office in North Carolina.

Kays said they were concerned specifically about abortion access, especially if Republicans gained more seats in the general assembly. In the Elon Poll, 35% of North Carolina voters surveyed said they would be extremely dissatisfied if abortion was banned in North Carolina.

Kerr said abortion is an issue that has been talked about since last summer when Roe v. Wade was overturned.

“Right when that decision was handed down, we saw a real bump in support for the Democrats,” Kerr said. “But I think it happened further back in the summer where that bump has started to recede down and people are actually more and more concerned with the economy over that aspect of things. There's not really a whole lot of single-issue voters out there.”

Before the election was over, Duque said seeing the Democratic candidates she has worked with lose would be very emotional after watching Republicans such as Johnson stay in power for the past 20 years.

“I’ve had some people say, ‘Why vote for a Democrat in Alamance County? They're not going to get elected, so why vote in the first place?’” Kerr said. “Elon’s definitely a microcosm of political thought.”