Lotte Fox, women’s golf’s MVP from last season, shares how golf has guided her throughout her life 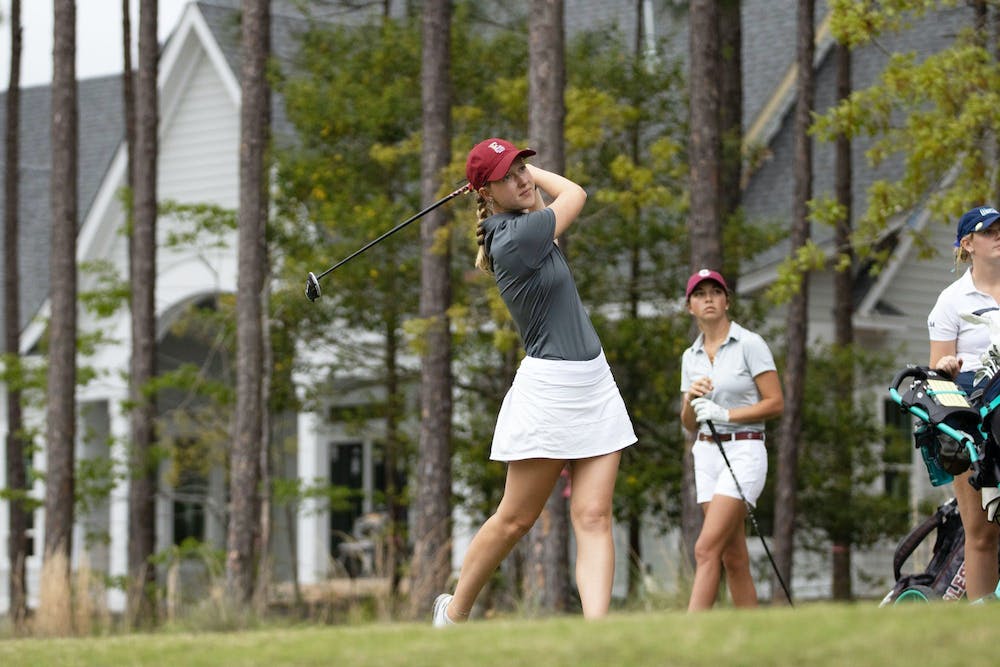 Photo by Jacob Kisamore | Elon News Network
Junior Lotte Fox hits a tee shot on the 10th hole at the Reserve Club at St. James in Southport, North Carolina, during the second round of the 2022 CAA Women’s Golf Championship on April 16. Fox shot a team-best 74 to move into a tie for 12th through two rounds.

Junior Lotte Fox is a business fellow, member of Alpha Kappa Psi business fraternity, Student Athlete Advisory Committee and most notably, on the women’s golf team. For the 2021-2022 school year, Fox was named the team’s “Most Valuable Player” at the Athletics Banquet in May. Fox had triumphed through a tough fall season, multiple tournaments and mental barriers, all which were recognized by head golf coach Chris Dockrill.

“I had a really good spring season,” Fox said. “My fall was a little bit shaky, I had a lot of personal issues. But my spring, I broke so many personal records. I shot my first round under par. And then I did it again, the next one after that, I came in the top 20 every single time. It’s just really good accomplishment of mine.”

Another achievement Fox had was beating those ranked above her on the team and finishing as the top player for the team in tournaments. Fox’s successes are shown in her numbers — shooting a 4.05 over par and an average of 75.76 for the team. Despite the success, she said she was still slightly surprised when she won MVP.

“My coach talked to me afterwards because I was walking up the stage to get my trophy during the banquet, and he’s like, ‘You surprised?’ And I was like, ‘A little bit,’” she said. “He’s like, ‘You deserve it, you had the really good spring, of course you deserve it. I’m really proud of you and you really showed what you’re capable of, and I’m excited for the next few years with you.’”

Fox moved to the U.S. from Germany when she was 8 years old and decided to play golf in college because of the opportunities it could present her with — something most European athletes don’t experience due to a lack of collegiate athletics.

“If I’m able to do it, I think it’d be a really cool accomplishment to have it, it would give me all sorts of experiences that a lot of people who don’t ever do athletics in college would have,” Fox said. “It helps me with my time management skills, I’ll get to meet new people who also play the sport, I would get to travel, just all of those things combined.”

She said he first heard about Elon from a friend and toured the school her sophomore year, reached out to Dockrill and got an email back from him her junior year. After touring the school, she had recognized that Elon had both the academics and athletics programs she was looking for, as opposed to some bigger schools she was looking at.

“[I] went on the visit, it was great, immediately got an offer, and I said yeah because campus was amazing, academics were exactly what I was looking for.” Fox said.

Another reason why Fox loved Elon was because it provided her with both smaller class sizes and a better opportunity to connect with her professors.

Fox said that although golf is an individual sport with Elon players from all over the world, they celebrate victories together and relate to each other on bad days.

“All sorts of people from different areas of the world have had different experiences with the sport, but are all at about a similar level, so they have all had the same experiences in terms of having a new breakthrough,” Fox said.