Get to know the overnight Elon University staff

A look inside Belk Library from midnight to 7 a.m. 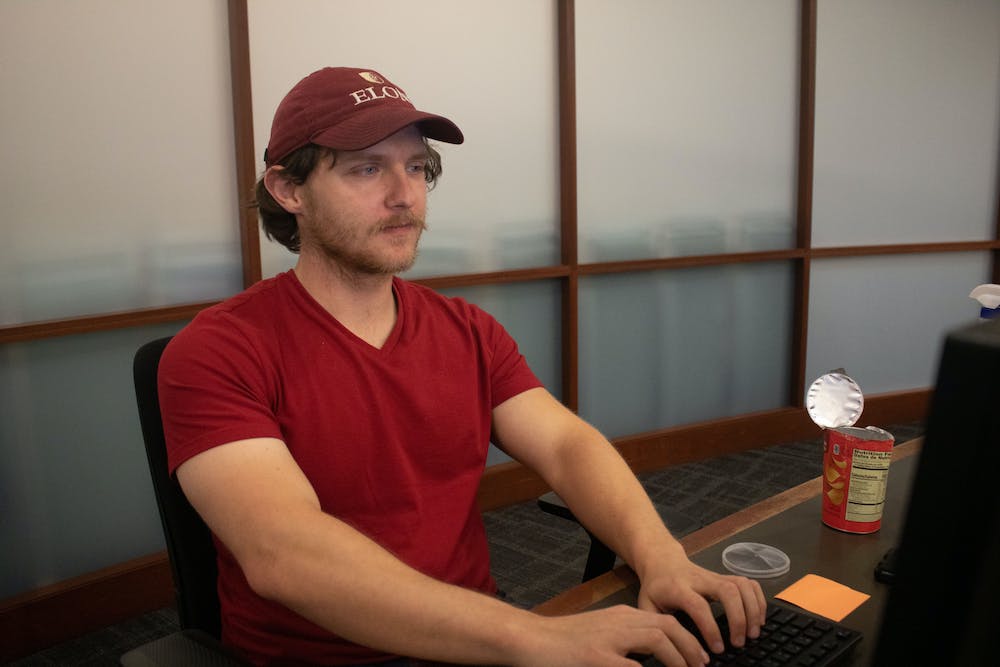 Photo by Ryan Kupperman | Elon News Network
Michael Myers sits at Belk Library’s service desk at 4:25 a.m. Myers is approaching a year working at Belk, taking the 11:30 p.m. to 7:30 a.m. shift during Elon’s academic year. A 26 year old with his undergraduate math degree from the University of North Carolina at Chapel Hill, Myers is currently taking an acting for non-majors class at Elon, attending martial arts classes in the Koury Center every Tuesday and Thursday and thinking about pursuing a masters degree in library science, statistics or computer programming.

It’s 3 a.m. inside Belk Library. Because the building is open all night during weekdays, all the lights remain on. From the first floor, it’s impossible to hear Tammy Wilson, Belk’s overnight janitor, wiping office windows and emptying trash cans on the second and third floors. Even for a library, the silence is overwhelming.

The library’s grand, oblong skylight invites the eye to spiral up towards the remaining floors. Going through the building’s front entrance, it’s easy to miss the figure lurking to the left. Yet there he sits behind the service desk, waiting. Who is he?

Not the fictional, Halloween serial killer, though — the 26-year-old part-time student with hobbies and interests as unique as his sleep and work schedules.

As a salsa, ballroom, rumba and swing dancer, a student in the martial arts — especially judo, jujitsu and aikido — a climber, an actor and a musician, Myers also works the overnight shift in Belk Library. Every Sunday through Thursday from 11:30 p.m. to 7:30 a.m., Myers can be found parked at the library’s service desk ready to help students with their printing issues and book renewals.

According to Myers, the best part of working the overnight shift is the freedom that comes with it.

“You really get to be your own boss, like you get to really set your own schedule here because I can check the book drops anytime, and check the email anytime, during my shift,” Myers said.

While burning the midnight oil at Belk is his primary job, Myers said he does work a part-time shift about once a month at Food Lion to keep paying his bills.

Myers started in the library in September 2021 after graduating from the University of North Carolina at Chapel Hill with a degree in math, and he is currently thinking about pursuing a master’s degree in either library science, statistics or computer science. During his time at Chapel Hill, Myers also took four years of Arabic, which he said he can speak and understand relatively well to this day.

Because he attended an early college high school at Rockingham County Early College, Myers received his associate degree at the same time he received his high school degree — which means he took college courses when he was 14 years old, alongside typical college students.

“It was different, the age gap there,” Myers said. “Interacting with people much older … that was really interesting.”

Born in Eden, North Carolina, Myers said he was also the first person in his immediate family to live outside the state of North Carolina, as he spent a year abroad in the United Kingdom. Myers’ brother, David, works the second shift in Belk from 3 p.m. to midnight — giving the brothers half an hour of overlap during their shifts.

Myers is the youngest of three, and while neither he nor his brother has kids, his sister has two daughters — four and 12 years old respectively — making him an uncle. Eventually, Myers said he’d like to have a child to have the experience of being a father.

With both of his parents still living, Myers said his mother worked as a bank teller for over 20 years and his father worked at a cigarette factory for about 12. Because of this, Myers said everyone in his family had been addicted to smoking at some point in their lives.

“My whole family, at one point or another, smoked — like habitually,” Myers said. “Except for me … I’ve seen the habit it could create and I could see the impact on your health it could have, so I made the decision that I’m not going to touch that.”

Although his job is relatively stationary, Myers said he likes to stay active. Originally getting into martial arts because some of his friends did it in college, Myers picked up the hobby again and attends martial arts classes in the Koury Center every Tuesday and Thursday in studio six at 8:30 p.m.

Although not a huge sports fan, Myers said he also follows North Carolina college basketball teams like Carolina and Duke, as well as Kansas’ team because head coach Roy Williams used to coach for UNC.

In terms of his interests, Myers said he likes listening to music and watching Netflix — both of which he is allowed to do during his overnight shift.

While he said he has a broad music taste — citing genres like hip hop, R&B, classic rock and heavy metal, as well as artists such as Michael Jackson, Kendrick Lamar, Donald Glover, Nelly and Lil’ John — his favorite pastime is watching “cringey” reality dating shows like “Love Island.”

On top of that, Myers also said he has played the guitar on and off for the past 12 years, gravitating to genres like classic rock and heavy metal.

Myers currently takes an acting for non majors class at Elon every Monday and Wednesday from 4 to 5:40 p.m. To wake up in time for school and work, Myers said he’ll typically wake up around 3 p.m. and spend the time after class but before his shift going to the gym, taking his dance or martial arts classes, hanging out with friends or exploring the area.

As of the end of August, Simply Thai is Myers’ favorite restaurant to eat near campus.

As he thinks about his future plans, Myers is currently looking for homes in Raleigh where he might be able to better pursue further education or begin a career still unknown to himself. While he said he has yet to decide what career path he wants to follow, Meyers said he would eventually like to live in Boston, where he could be in a city close to the beach.

A man of many talents and hobbies, Myers is one of many hidden Elon gems on campus known mostly to the nocturnal and the insomniacs.

Though he enjoys helping and interacting with students, Myers estimates that he might see up to five students … on a busy night. If you ever see him, don’t hesitate to strike up a conversation. Not only is he more interesting than perhaps the more famous, fictitious Michael Myers, but he is also a whole lot friendlier.

“I’d say one of the cons is I like to have someone to talk to,” Myers said. “Sometimes it can get a little bit lonely.”