Seniors lead the No. 2 ranked CAA volleyball team into the 2022 season 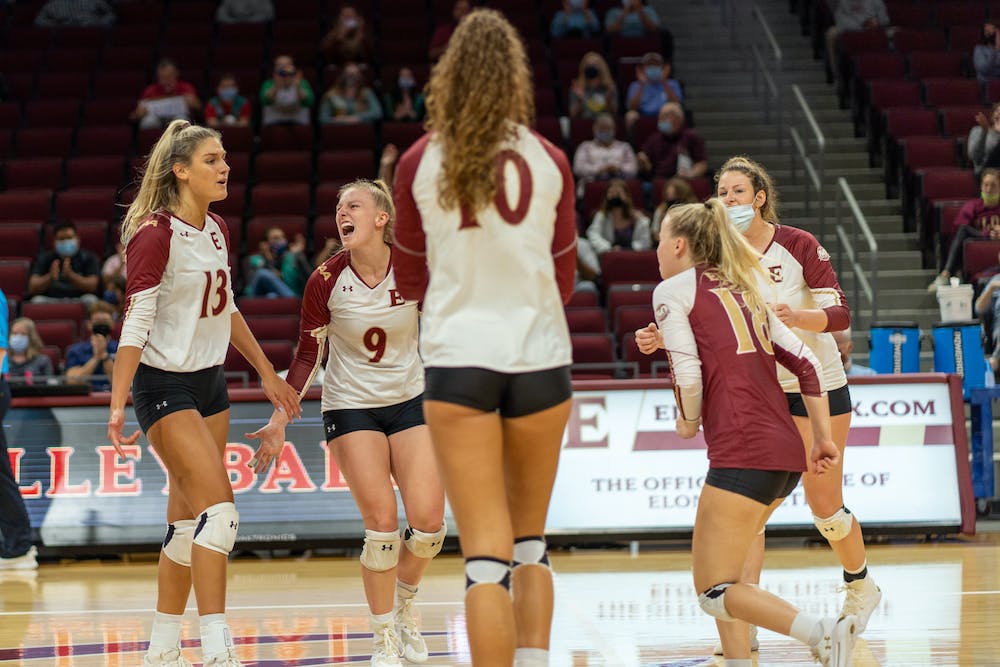 Photo by Clare Grant | Elon News Network
The Elon Phoenix Volleyball team celebrates a point during their game against the James Madison Dukes on Oct. 9.

Elon women’s volleyball returns to Schar Center following a historic season that ended in a trip to the 2021 Colonial Athletic Association championship. The Phoenix lost to Towson University but will return this year facing new opponents in the CAA, including Hampton University, North Carolina A&T University and Stony Brook University.

The team ranked No. 2 in the CAA preseason rankings. Senior captain Haylie Clark and CAA Preseason Player of the Year Leah Daniel are leading the charge this year, stepping up to help new players adjust from high school to college athletics.

“Everybody on our team is really close, and anyone can go up to anyone and ask for advice or just have a normal conversation,” Clarke said.

While both Clark and Daniel are grateful for recognition within the conference, as both were named to the 2022 Preseason All-CAA Team, they know this makes them players to watch out for. The fact that coaches are training their teams to challenge Elon’s strengths adds to Daniel’s drive.

“You just have to take that and allow it to push ourselves even more and show why we, or others with these awards, were chosen,” Daniel said.

But Daniel also recognized she would not be where she is today without the help of the other women on the team.

“I would not have gotten it without being surrounded by the competition level that I am — surrounded by all the girls on the team, from freshmen, up to the seniors, until Haylie,” Daniel said. “I feel like they push me to be the best I can be, just like I’m sure I do to them.”

This season will be Clark’s third as a team captain. She said the years of experience have taught her how to support her teammates in a leadership position.

“It really just means trying to push the girls in the best way that I can, giving them constructive criticism and being someone that they can rely on to uplift them,” Clark said. “Especially in a game setting where you’re going to have mental challenges as well as skill challenges, where you need somebody who you can rely on to pick you up.”

Both Clark and Daniel urged the Elon community to come cheer on the team in Schar Center throughout this upcoming season — one they hope will culminate in a CAA conference championship. The team plans to do this, according to Daniel, by placing heavy emphasis on the execution of skills refined in practices.

“We want to play the best we can and take every advantage of every opportunity that we’re given,” Daniel said. “A big thing we’re talking about this year is execution, whether that is going to every single practice and walking out of it saying, ‘I gave my 100% effort, I did everything I could to get better today,’ or pushing each other doing whatever we can to always take that next step to be better.”