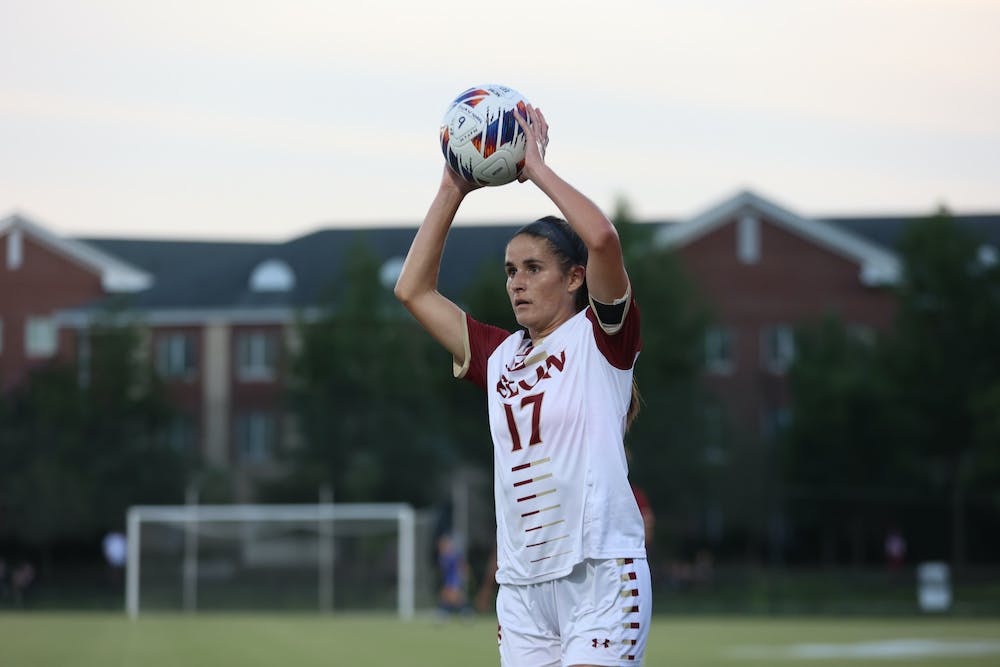 The Elon University women’s soccer team scored first but could not hold its lead against the North Carolina State Wolfpack, as a goal in the 78th minute helped the Wolfpack defeat the Phoenix 2-1.

Coming off a 5-1 loss to Virginia Tech on Aug. 28, head coach Neil Payne said he was much happier with how the Phoenix performed against the Wolfpack.

“We were disappointed against Virginia Tech. We were 30% of who we should be,” Payne said. “Tonight, we came out with the right mentality, the right attitude.”

Senior forward Jessica Carrieri scored in the 13th minute to put Elon ahead 1-0. The goal ended a 29-match goalless drought for Carrieri, who last scored on March 5, 2021.

Carrieri tallied nine goals during her freshman season but just one in her last two, and she said she hopes returning to the scoresheet tonight will be a sign of things to come.

“For my senior year, I really wanted to get back to where I started,” Carrieri said. “Just using my skills, my pace and my shot to get more goals to my name.”

Elon’s eight goals this season have all been scored by different players, as nobody on the team has more than one goal. The balance in scoring differs from the team’s production last season, when Carson Jones ‘21 scored nearly one-third of Elon’s goals.

“It’s something we were missing last year,” Payne said. “We’ve got players that have an appetite to get to the goal. It’s really pleasing to see.”

NC State continued to dominate possession throughout the second half until it capitalized with a goal on another opportunity created from a corner kick in the 78th minute to go ahead 2-1.

“It’s really pleasing that NC State didn’t score in open play, which is a massive plus for us, but knowing this group, we will be disappointed we gave up two corners,” Payne said.

Despite a late push in the final minutes, Elon could not find an equalizing goal and lost 2-1. NC State outshot Elon 23-8 for the match.

This was Elon’s second straight match against an Atlantic Coast Conference opponent. Carrieri said the matches against strong programs will help Elon as the team prepares for Colonial Athletic Association play.

“It was really important we play these teams because Neil wants us to show our areas of weakness and see where we can get better for conference,” Carrieri said.

Elon (1-2-1) continues its five-match homestand to open the season with a match against the University of North Carolina-Asheville on Sept. 4. The match at Rudd Field will begin at 7 p.m.