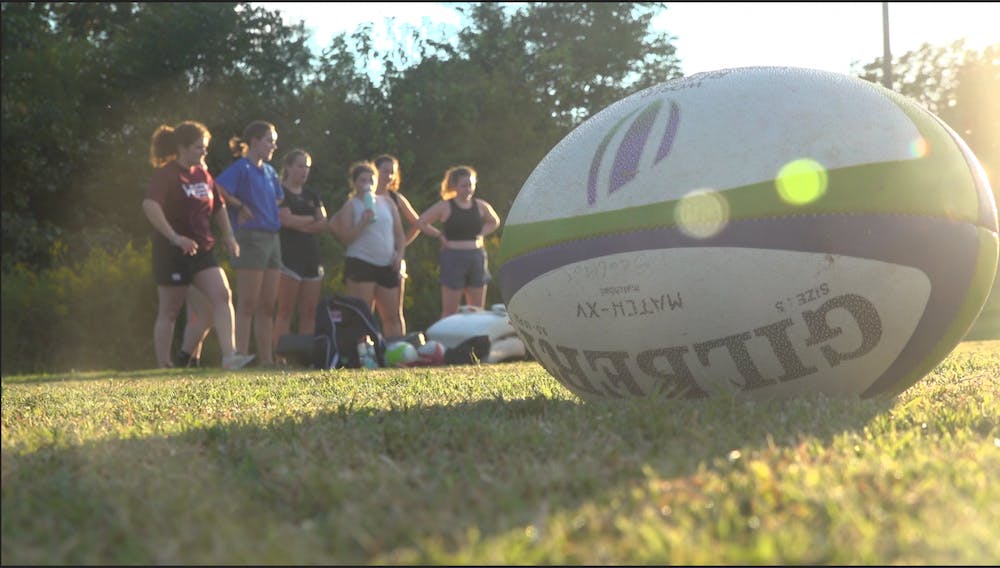 Photo by Grace Stetler | Elon News Network
Six members of the newly reinstated club women’s rugby practice on the intramural fields. Club president Caroline Moses said she brought the club back from its COVID-19 hiatus because of her passion for the sport and the importance of empowering and educating women around the stigma surrounding male-dominated sports.

Junior and club president Caroline Moses said the mission is not only the guiding force behind the team this semester, but the reason behind why they play.

Moses first joined club rugby two years ago and knew she had to bring it back after it had been discontinued, not just for the community, but for herself.

“It just never got picked up again,” Moses said. “This summer, I played in Asheville, North Carolina, with a club team, and just realized I can’t go back to school not having a team and not having rugby. So I decided to start one myself, so I could have that environment again.”

As president of the team, Moses takes on other roles, such as team captain.

However, her experience on the team has not only improved her playing skills, but also her leadership style.

“Leadership can come in a lot of different forms,” Moses said. “I am the president, I also serve as captain, and a lot of other members of the executive board are captains as well. So leadership can be really collaborative, and it can be whatever you want it to be, but having other people help you mold that is really, really important.”

Because of her efforts, this year’s women’s club rugby team has amassed twenty women who practice each Tuesday and Thursday night under the lights from 6 to 8 p.m. on the intramural fields.

Sophomore player Ugochi Okonkwo said rugby has always been in the back of her mind, but outside forces consistently stopped her from playing.

“I always wanted to play football, but since it was a men’s majority sport, I knew it would just be odd and different,” Okonkwo said. “I did track growing up in high school, and all my coaches were all football coaches as well, so I would always watch that. And my coaches would always tell me if I were a guy, I would be good at football.”

Okonkwo said this message has pushed her to both work at the sport she now has a passion for, as well as break down the stigma surrounding male-dominated sports.

“ I feel like the women are just as good. Women’s sports are always underrated, that is just how it is unfortunately,” Okonkwo said. “But honestly, just being on the team and watching women’s rugby, I know there is nothing different between the men and the women. They are all good, they are all strong, they all work hard, especially the women.”

Both Moses and Okonkwo said they believe in the importance of equal opportunity and women’s sports, even beyond the athletic components.

For Okonkwo, the women’s club rugby represents a passion brought to life, and she is mindful to share her experience with those unfamiliar with the team.

“I know for myself, ever since I signed that paper that, yeah I am doing rugby, I have told almost everybody that I have come in contact with … if we have conversations I’m like, ‘Yeah, I play on the rugby team,’” Okonkwo said. “I just feel like, with the way we are talking to people and bridging awareness … we brought it back.”