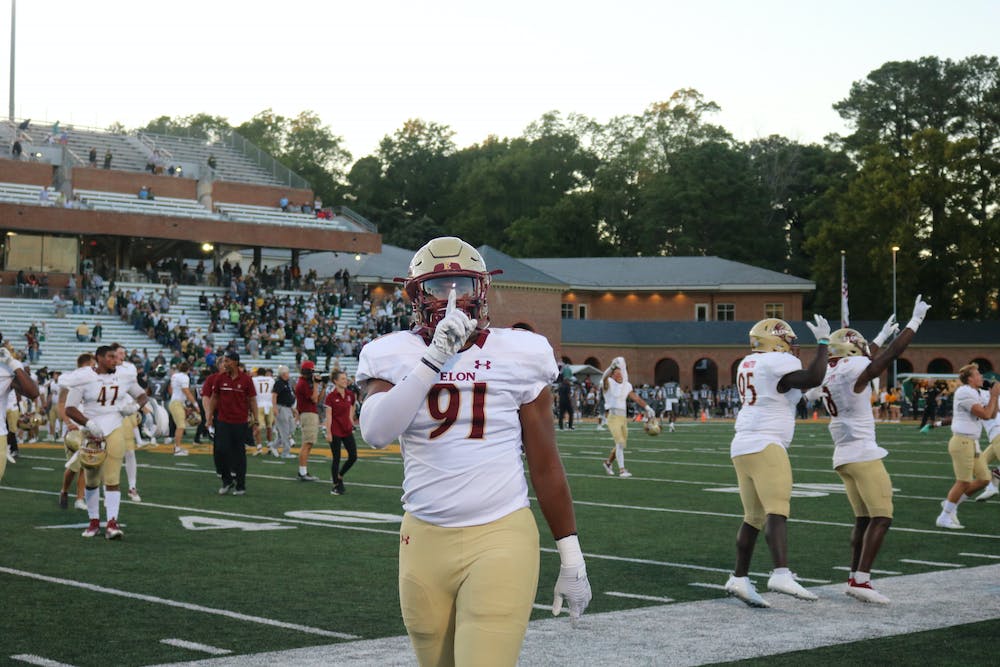 WILLIAMSBURG, VA. – The Elon University football team traveled to historic Williamsburg to take on its first conference opponent of the season, the William & Mary Tribe, ranked No. 14 in the Football Championship Subdivision. The Tribe came out strong going up 28-10 in the first half. But thanks to a strong second half, the Phoenix was able to hold off the Tribe 35-31 in a thrilling comeback victory.

“Proud of our guys for the resiliency in the second half,” Trisciani said. “We knew we had 30 more minutes so we went out and played those 30 the best we could. Did it one defensive stop at a time and one drive at a time offensively, and look what can happen.”

Elon redshirt freshman running back Jalen Hampton had yet another strong performance in the running game with 145 yards and 3 touchdowns. After the game, Hampton said he is proving people wrong after transferring from Virginia Tech last year.

“Every week, I come in with a chip on my shoulder,” Hampton said. “I've been wrote off.”

Hampton was encouraged by having his family in the crowd. He said it was an unreal experience to have his family on the stands cheering him on.

“It feels like a dream, it’s perfect,” Hampton said.

Hampton did not carry the team alone, as Trisciani said Elon’s offensive line and offensive staff played a huge role in this game. The offensive line did not allow a sack on senior quarterback Matthew McKay all game and created running holes for Hampton to get through.

“The big guys up front have a lot to do with it and a great plan by our offensive staff to find that extra crease and that extra gap for him,” Trisciani said.

William & Mary, which came into this game with only one offensive turnover on the year, had four today against the Phoenix. Trisciani said the toughness his team showed in the second half was the catalyst.

“Just the belief and the courage and the fight and the strain in the second half when things get hard, that's when you need the mental toughness to be able to focus and do your job and you’re tired, and our guys were able to do that today,” Trisciani said.

“I think we’re one of the best teams in the CAA to be honest,” Hampton said. “I would tell the people to wake up and stop sleeping on us.”

Elon will be back at home Oct. 1 for Parents Weekend, when the Phoenix will take on another in conference rival the University of Richmond at 2 p.m. in Rhodes Stadium.