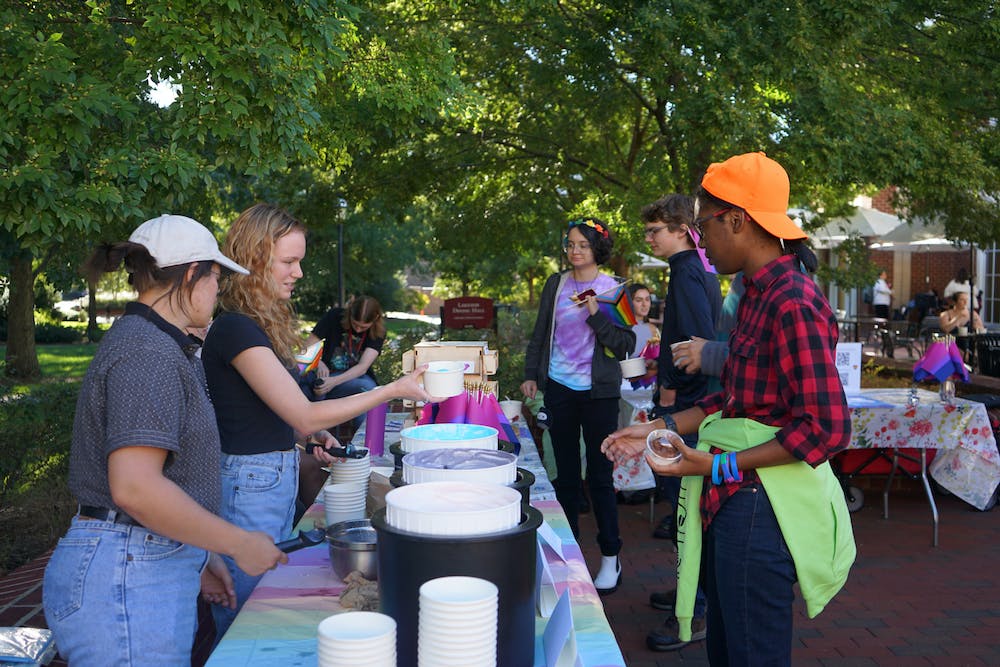 Elon University’s Gender & LGBTQIA Center celebrated Bisexual Awareness Week from Sept. 16 to Sept. 23, National Day of Bisexual Visibility. Various events were held to promote, respect and spread awareness for the bisexual and other LGBTQIA+ populations on campus and nationwide.

Throughout the week, allies and bisexual students and faculty on campus had chances to learn about the history, culture, community and current priorities of bisexual communities. Many found event schedules on the GLC Instagram or on posters around campus.

Sophomore students Lindsey Hefty and Reia Outten, who both identify as bisexual, celebrated the week at the GLC’s annual ice cream social event Sept. 23 after seeing an announcement on the GLC Instagram.

“Events like this are important for us so that we can know we’re not alone, like we’re not the only ones on campus, and to know we have this whole community,” Outten said.

The Bi-ce Cream Social gathering was held at Lakeside Plaza to promote bisexual awareness and help students connect. Smitty’s ice cream was served in the colors of the bisexual flag: pink strawberry, blue vanilla  and purple cherry. Students relaxed and enjoyed the end of the week with bisexual and pride flags in hand.

“I think there’s a lot of stigma about the queer community in the South, and so I think it’s really important for us to –  just be,” Hefty said.

Earlier in the week, the GLC held a Bi-Icons event on Sept. 20, featuring iconic current and historical figures that identified as bisexual. The event supported an opportunity for students to interact with each other while also learning about famous or popular bisexual icons.

“The event went well. Essentially, it was like a Bingo game for people, and there was a social component for people to interact with others who attended the event,” said Vanessa Truelove, a graduate apprentice for the GLC.

Events such as the Bi-Icons event were set to stomp the stigmatization surrounding bisexual identities within queer communities, according to Truelove.

Education was a common goal for all who celebrated the week, especially for GLC event staff, who wanted to gain a further audience for queer identities on campus.

“I think education is vital,” Hefty said. “The GLC does so much important work about destigmatizing and educating people on pronouns and identities.”