Seward Johnson’s “Embracing Peace” will be dismantled after nearly three years on display at Alamance Arts, next exhibition location not finalized 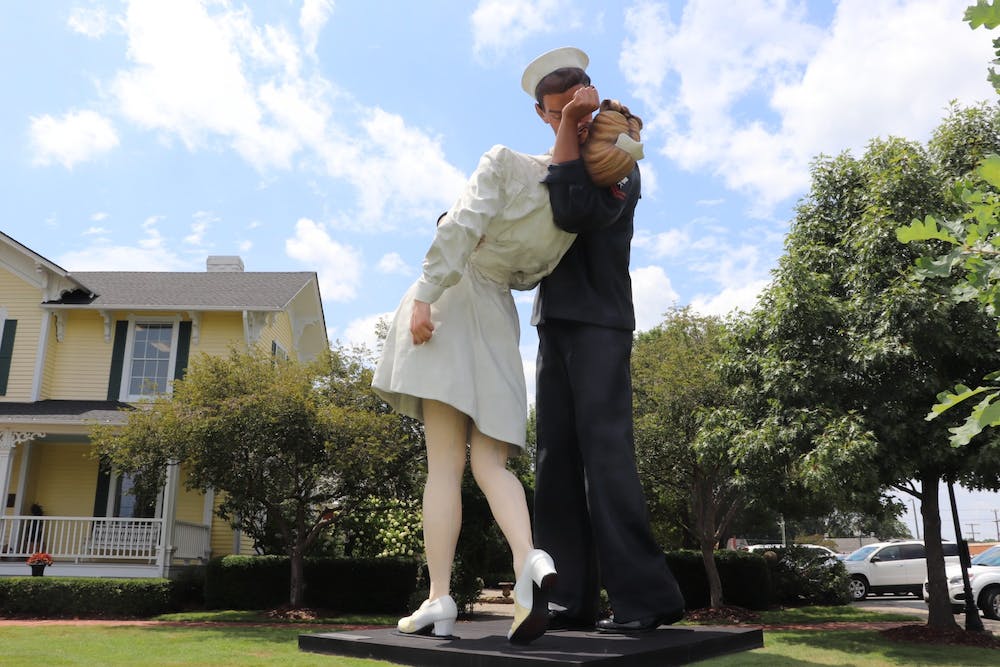 
Seward Johnson’s Embracing Peace statue on display on the front lawn of Alamance Arts July 27. After nearly three years in Graham, the sculpture will be dismantled and relocated.

Seward Johnson’s “Embracing Peace” is leaving Graham after nearly three years on display on the front lawn of Alamance Arts.

An artist and philanthropist, Johnson initially gained prominence for his sculptures depicting people engaged in everyday activities. Even though Johnson died March 10, 2020, at age 89, his sculptures travel regularly in an effort to continue his legacy and reach as many communities as possible, according to Jenée Castellanos, associate curator at The Seward Johnson Atelier.

Castellanos wrote in an email to Elon News Network that “Embracing Peace,” which came to Alamance Arts in the fall of 2019, is a sculpture that pays homage to World War II veterans.

“This artwork honors the memory of the past, reminding us of the sacrifice of a nation, and awakens a younger generation to a turning point in our nation’s history,” Castellanos wrote.

The next exhibition location for the statue is not yet finalized. Castellanos wrote in the meantime, it will return to the studio for cleaning and touch-ups.

Karen Carrouth, community outreach coordinator at Alamance Arts, said “Embracing Peace” was the third Johnson exhibit hosted by the organization. “Beyond the Frame,” a series of over 30 life-size sculptures, was displayed on the ground and in the house of Alamance Arts in 2011 and “Celebrating the Familiar,” which featured 20 life-size bronze sculptures scattered across the county, in 2006.

“I’ve seen that over and over again,” Carrouth said. “My office window overlooks that statue, and I can’t tell you the number of times that I’ve seen couples, all kinds of couples, go out there and recreate the pose.”

Carrouth said the Alamance Arts Council has a budget for art exhibits, but the money for larger, more expensive exhibits like “Embracing Peace” comes from an endowment fund set aside by the local Wooten family. The Wooten Family Endowment of Alamance Arts was established by Wiley Wooten and his siblings in memory of their parents, according to Carrouth.

“They wanted to make sure world-class art was available to be seen by the people of Alamance County at no charge,” Carrouth said. “As a result of that, we’ve had these wonderful exhibits over the years.”

The funds generated by the Wooten exhibits either through donations, sponsorships or gift shop sales are not contributed to the general accounting of the Arts Council — rather, the funds raised through the presentations are used to replenish the Wooten Family Fund, according to Carrouth.

Carrouth is completing 10 years with Alamance Arts and said visitors have come from all over to see the exhibits on display.

“It’s been so gratifying to see local folks come out, bring their families, their friends to see this, and then to bring people from all over to see these big exhibits,” Carrouth said.

Alamance Arts will host a going away party Thursday, Aug. 11, from 6 to 8 p.m., featuring entertainment and the history of the sculpture. The last day to view the statue will be Aug. 14 before dismantling takes place Aug. 15 and 16.