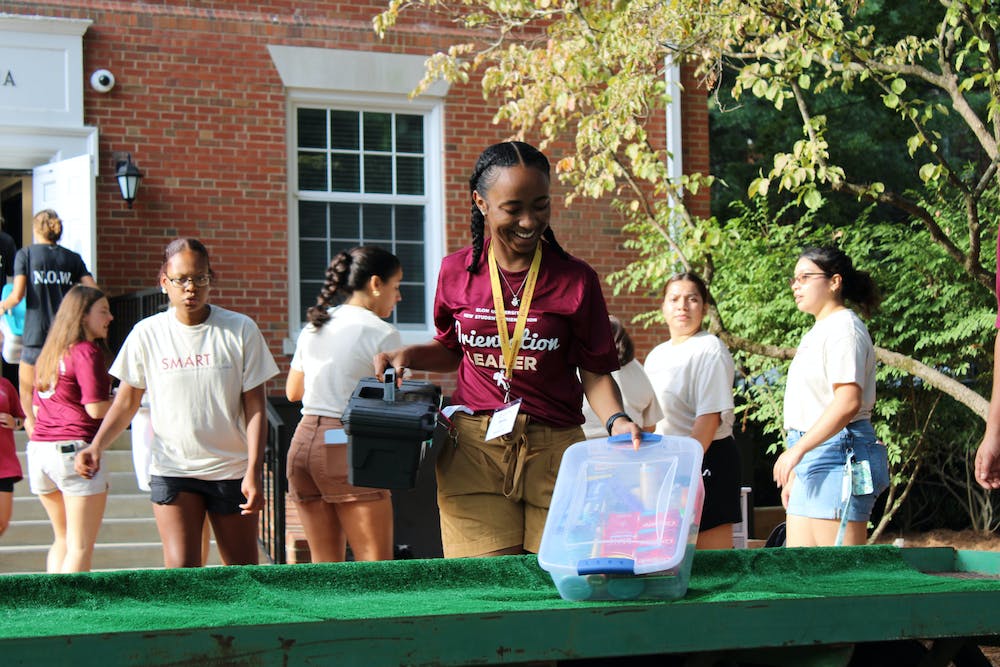 At the core of Elon’s original campus, Historic Neighborhood connects the university with its beginnings. The neighborhood has six residence halls, mostly filled with freshmen. It is located near Academic Village and The McEwen School of Communications, as well as Downtown Elon. Neighborhood amenities include the McEwen Dining Hall and LaRose Commons. There are three Living Learning Communities: communications, sports management and outdoor learning. The neighborhood’s theme is Elon traditions and history.

The first cars are slowly rolling into Elon University’s Historic Neighborhood this morning. Orientation leaders greet members of the class of 2026 and their families, directing them to their residence halls.

Orientation leaders began training last Saturday, and senior Tommy Truitt said he enjoys the opportunity to be a guide and resource for freshmen.

“I am feeling very excited, it’s been a long week,” Truitt said. “I’m tired, but you know what, I’m really excited. It feels very rewarding, this entire process, to have an opportunity to be mentors to these new students.”

Zeke Davis, a resident advisor in Virginia Hall this year, was an RA in Smith Hall last year. Davis is awaiting new students in Virginia but said there’s very few coming into his hall.

“It’s more chill this year than last year – a whole bunch of people came in, they were so excited,” Davis said. “This year, there’s not many students.”

Sophomore Claire Cohen said her own orientation leader last year, Gayatri Chopra, inspired her to be one too.

“She honestly was just so incredible and was just really there for us the entire year, and so I want to do the same thing,” Cohen said.

Cohen’s favorite aspects about move-in are carrying boxes and meeting new people. She said orientation training allowed her to create closer relationships with others training in Historic.

Cohen hopes freshmen will have the chance to meet people on their floors today.

“It’s important to take a second to say hi to your RA, say hi to other people on your floor and just get settled in,” Cohen said.

Sophie Rosenthal and Kyra O'Connor contributed to the reporting of this story.