Born out of the 2020 History and Memory Committee, the initiative serves to understand Elon’s past, recognize Black individuals who have been agents of change and create sustainable change 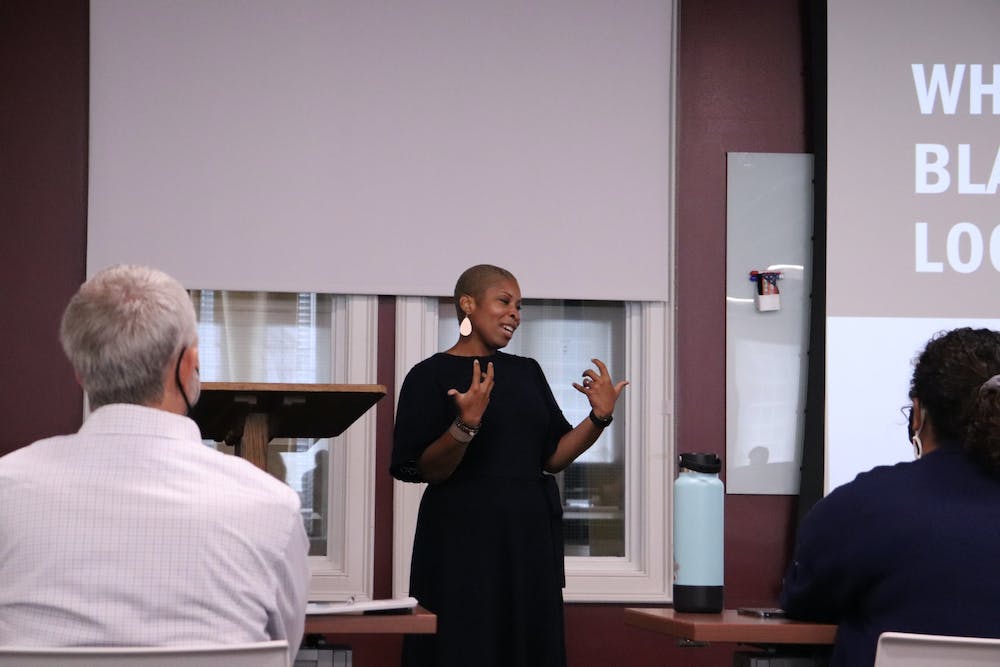 For most of Elon University’s history, Black stories have not been shared, making progress nearly impossible, said Buffie Longmire-Avital, director of the Black Lumen Project.

Longmire-Avital presented the Black Lumen Project’s main accomplishments from its first year on Aug. 16 as a part of planning week. This presentation was for other Elon faculty and staff members, letting them know where to find resources to learn about Black history within Elon and how to create sustainable change.

In 2020, the Committee on Elon History and Memory released a report with sections of the university’s history and recommendations for moving forward, including a proposal for the Black Lumen Project, an initiative to make the university community more equitable. The Black Lumen Project looks at Black individuals who have historically made a difference at Elon and weren’t always recognized for their contributions.

“One of the things that we saw in working on that History and Memory Report, and really doing a deep dive and thinking about anti-Black racism in particular, was resilience of Black community members,” Longmire-Avital said. “Both external to Elon’s campus and around the surrounding areas and also on campus, and how individuals really rallied to create these kinds of counterspaces, counternarratives to provide that shelter through the storm.”

Director of the Black Lumen Project

Longmire-Avital said the work that the Black Lumen Project does is twofold and also includes working to create sustainable change. She said previously, progress has been made in creating community spaces for Black people on campus, telling stories of marginalized individuals and providing resources for faculty who are looking to include these stories in their classes.

Longmire-Avital said the work being done can’t just examine what a Black institution looks like now, but what it will look like in the years and decades ahead. But, she said, these changes haven’t been streamlined enough to last beyond staff members leaving.

Charles Irons, past chair of the Committee on Elon History and Memory, said Black Lumen has looked at the history of Alamance County, focusing on things such as the two known lynchings that occurred and other stories that had “confusing deaths,” which can’t be proven accidental or racially motivated.

Irons has traced and connected with different individuals who are connected to Elon, such as Andrew Morgan. Irons worked with Morgan’s family to document his story and said in 1926 when Morgan worked as a maintenance worker, Elon did not yet accept Black students into the college. Irons said that telling these stories fills him with emotion, especially as they mean so much to families.

He said he has received resistance from people who refuse to acknowledge Elon’s history with racism.

“Someone asked me, ‘Can you tell me honestly, what difference one person of color in the room would make?’” Irons said.

Irons said the resistance he sees comes from white people who are unaware of their own ignorance. This resistance, he believes, stems from those who don’t understand Alamance County’s history or what life on Elon’s campus was like at the time of integration.

“One of the things from a white person's perspective, I think I can say, is that white people are able to be thoroughly racist without ideating racism,” Irons said. “Without thinking about it, this kind of unconsciousness. Folks who don't remember being really bigoted. When someone reflects back to them the things that they did, ‘That's not me, I'm a Democrat and that couldn't be me.”