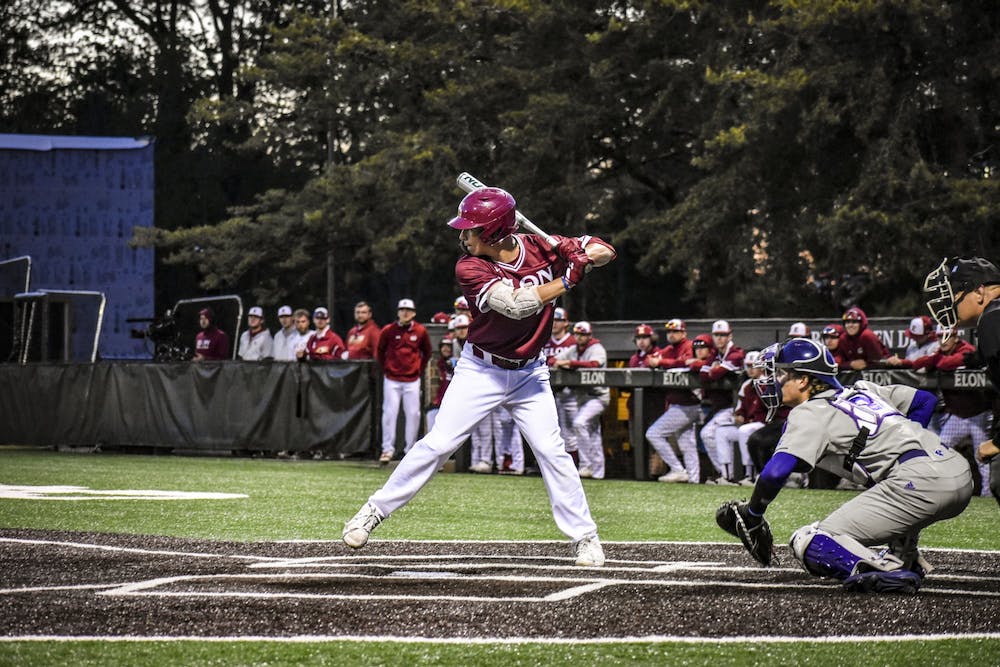 This article was updated on July 21 9:52 a.m. to include additional quotes

Former Elon University outfielder Alex Iadisernia has been selected by the St. Louis Cardinals on day two of the 2022 MLB Draft. The Cardinals selected Iadisernia in the seventh round of the draft with the 217th overall pick.

With the selection, Iadisernia becomes just the sixth Phoenix hitter ever to be drafted in the top 10 rounds, joining Chase Austin (‘09 fifth round), Aaron Cannaday (‘92 eighth round), Nick Zammarelli (‘16 eighth round), Ty Adcock (‘19 eighth round), and head coach Mike Kennedy (‘90 ninth round).

Iadisernia is the first Elon baseball player to be drafted since 2019, when four former Phoenix players were selected. In the 2019 draft, George Kirby became the first Elon player ever to be drafted in the first round, as he was selected 20th overall by the Seattle Mariners. Adcock, Kyle Brnovich and Cam Devanney were the other three Phoenix selected in that draft.

Watching the draft on TV with his family and friends from his home in Neptune, New Jersey, Iadisernia said that everyone went crazy when he heard his name called.

“I’m happy that they’re happy,” Iadisernia said. “It was great to see the smile on their faces.”

Coach Kennedy said that he found out that Iadisernia was drafted by text message from assistant coach Jerry Oakes while he was running an errand, and that he could not be more thrilled for his former outfielder.

“I love that kid, he’s as good as they come,” Kennedy said. “Certainly a great player, but he's an awesome kid, so I'm really, really happy for him.”

With Iadisernia being the second highest Elon hitter to ever be drafted, Kennedy said it speaks volumes to the type of player and person he is.

“What I love about Alex is he’s very coachable,” Kennedy said. “He listens, he really wants to get better.”

Kennedy added that Iadisernia went on to become one of the best hitters the Phoenix has ever had.

“He trusts our staff here and bought into what we were telling him to be a good hitter,” Kennedy said. “And he went to work and became one of the best we had here.”

But as Iadisernia continues his career in the Cardinals organization, Kennedy says the future is bright for the former Phoenix outfielder.

“All the things you think about as a hitter, he's got 'em, but I think the biggest plus for Alex that you can't teach is he loves to play,” Kennedy said. “He just absolutely loves to play. And I think guys like that, they find a way to make it a long way in this game.”

The past few days for Iadisernia have been extremely busy, as his phone was blowing up from the moment he got drafted.

“In the moment, it was like wow, this is crazy,” Iadisernia said. “I was getting all the texts and phone calls so I was kind of dealing with a lot at the time, but it was an amazing feeling.”

The next step for Iadisernia is to head down to the Cardinals spring training facility in Jupiter, Florida and to get acclimated to his new environment.

While he does not know yet what the organization has planned for him beyond that, Iadisernia is thrilled to be a part of the Cardinals system.

“It was an amazing feeling, knowing I’m going to a great organization with a great minor league system and obviously all the success they’ve had in the big leagues, it’s truly a blessing,” Iadisernia said. “I just can’t wait to get started.”