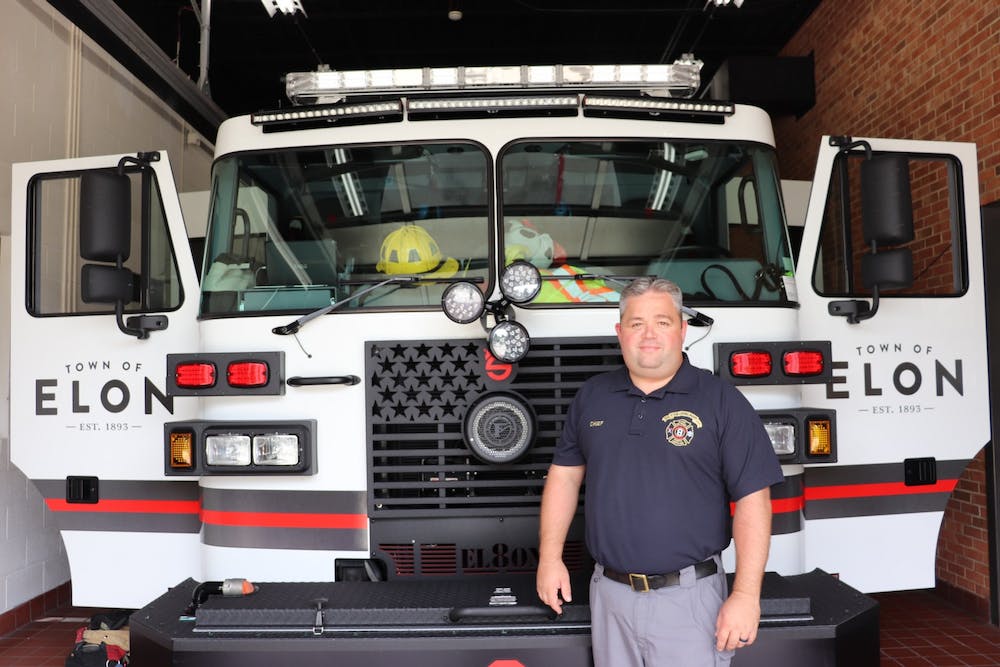 Photo by Avery Sloan | Elon News Network
Elon Fire Chief Landon Massey shares his experience in his new role with the town. As an Alamance County native, Massey is excited to continue serving his community.

Despite coming from four generations of firefighters, Chief Landon Massey had no interest in joining the profession until he graduated high school. And though he said he didn’t envision himself in this career from a young age, he has been immersed in the environment his whole life.

“Growing up, back then the fire whistle would go off on top of the fire station, you’d see your father, your grandfather run out the door to go to the fire station,” Massey said. “It was always exciting to see that. It kind of set me up for a career because I already kind of knew about the fire service.”

Part of what Massey said led him to the job of fire chief at Elon is family. He’s lived in Alamance County for all of his life — apart from one year — and for the past 16 years has worked at EM Holt Fire Department in Burlington. This gave Massey the experience necessary to fulfill the role of chief, and he also said because this department works with the Elon department, he was already familiar with them.

“My family's here, and so I have no interest in leaving the town,” Massey said. “The fire department, they have such great conditions. It's just a very appealing place to work.”

Since Massey has been at Elon, he said he has focused on finding ways to adapt and progress the fire department, while learning the town’s goals and traditions. Town Manager Rich Roedner said this has allowed for a seamless transition.

“He is a new sheriff in town over there, but it's not like he comes in with swagger that makes everybody jump,” Roedner said. “He comes in, ‘Alright, I need to learn how you guys do things and why you do them the way you do them, and then we can start looking at if that's the best way to do them.’”

Roedner said Massey was one of 35 applicants who seemed like a good fit for the town. The search for a new fire chief began after the former chief retired in November, however, Roedner said due to a lack of confidentiality in the hiring process, hiring a new chief was delayed until June, leaving Elon’s deputy chief to fill the role in the interim. Roedner also said he was getting calls from applicants about other applicants, leading him to put a hold on the process.

Throughout the lengthy process, Roedner said he remained in contact with Massey  and believed he was qualified for the role. Over the past year, Roedner said the department had a number of vacant department head positions, leaving him and other staff members to fill in the gaps.

However, due to connections between different departments in the area, Roedner said these transitions in leadership were overall smooth, and he is excited to continue working with Massey and further increase collaboration between departments.

Massey said he has had a busy few weeks learning the ropes of a new department, but the people on his team have helped his transition immensely.