Alva Sizemore, the first full-time paid fire chief for the town of Elon, will retire at the end of November 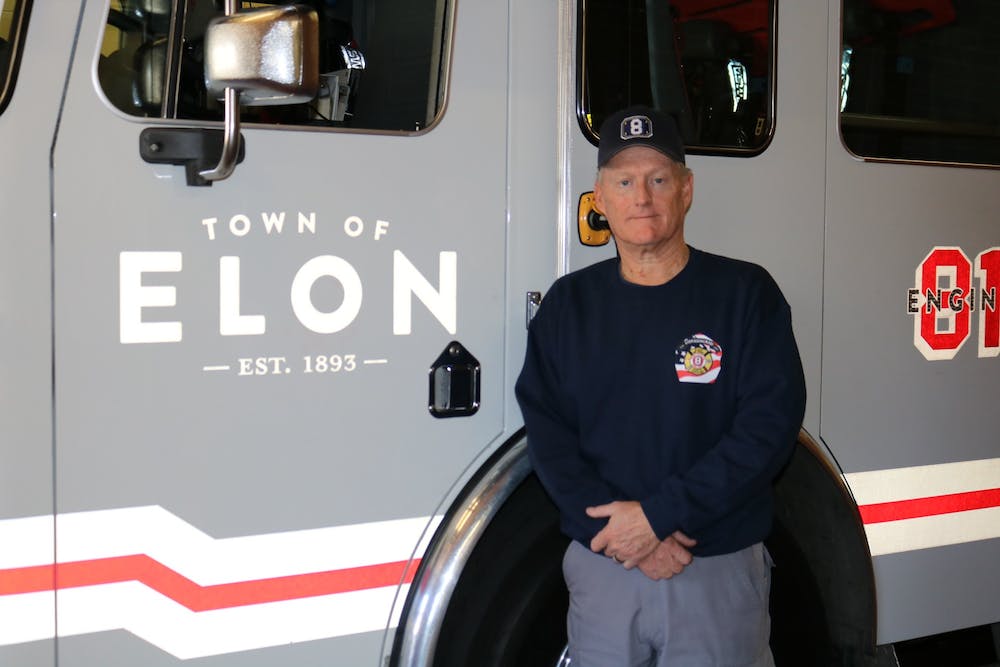 Photo by Nyah Phengsitthy | Elon News Network
Elon Fire Chief Alva Sizemore reflects on his time working in his fire career. Sizemore will retire at the end of November after serving as the chief since 2015.

Alva Sizemore walked through the town of Elon Fire Department Station No. 8 in 1976 when he was a senior in high school. Little did he know that he would become the first full-time paid fire chief for the town of Elon in 2015.

Now, after putting out fires for 45 years, Sizemore will retire at the end of November.

“It’s always been said that firefighting gets in your blood. It's a calling, it really is,” Sizemore said.  “I know that was God's calling on my life to be a fireman.”

While he first joined the town of Elon’s fire department as a volunteer firefighter, Sizemore stayed in the firefighting career. He was hired by the City of Burlington in 1990 to be a firefighter and later returned to serve in the town of Elon in 1996 as the assistant chief of operations. Between 2011 and 2015, Sizemore served as the deputy fire marshall for Alamance County until he became the Elon fire chief.

Throughout his journey with fire departments around the area, Sizemore said he watched Elon grow — from the town itself to the university renovating almost every building on campus. He watched the fire department go from four to 13 firetrucks, and before the pandemic hit, the Elon fire department was working with around 2,000 calls per year.

Serving as the current Burlington fire chief, Jay Mebane said his journey with Sizemore started early in his career— Mebane served as a volunteer firefighter for the town of Elon when Sizemore was just stepping into the new role of chief.

Over the years, Mebane said he enjoyed working with him because of his collaborative work ethic, and most importantly to him, the kindness he shared with others.

“He's willing to give you the shirt off his back,” Mebane said. “He's that type of guy. It's just been a pleasure. It's been a pleasure working with him over the last couple of years now in this profession.”

Mebane said that the adversities Sizemore overcame throughout his career are some of the biggest memories he will leave behind.

“The biggest impact is his heart of forgiveness and his willingness to treat everyone fairly,” Mebane said. “He's got a great perspective on that and he leads with a soft heart, but he leads like a giant as well.”

Though he has only been working with Sizemore for about two years, town of Elon manager Richard Roedner said the town has benefited from the experiences and expertise Sizemore brought to Elon.

“Alva has shown a real talent for managing those two different types of models,” Roedener said. “Working a full time staff every day, working with the call force when they come in, or the volunteers.”

Working in the law enforcement realm with Sizemore, Elon Police Chief Kelly Blackwelder said her first impression of Sizemore was his passion and drive for fire safety — one thing that will definitely be missed when he’s no longer chief.

“My first impression of him was this guy's intenseness. He's serious,” Blackwelder said. “He's very knowledgeable and he can sit there and quote, firewall and codes and the county's fire marshal handbook and occupancy.”

Blackwelder said she watched Sizemore go from volunteering for the Elon fire department to deputy fire marshall, and then finally returning to Elon to be chief. Though she said she will remember his work ethic, Sizemore’s role in bringing the Elon police and fire department together will be what she remembers most.

“Fire departments and police departments have this brother-sister love-hate relationship,” Blackwelder said. “They really are like brothers and sisters to us. It's a really good working relationship and I don't think it'd be that way without him being there.”

Sizemore said though he is retiring, he will still continue volunteering with other departments in the Alamance County area. Sizemore also currently serves as the deputy chief of North Central Fire Department and will continue to even after he retires from chief.

According to Roedner, there were 50 applications submitted for the new town of Elon fire chief. Roedner said he is in the process of creating an interview team to narrow down the applicants and choose a fire chief soon.

Sizemore said that although he is proud of the role he has held for years now, it’s time for a new person to take the Elon Fire Department to the next level.