With two out of six council members absent from the July 25 work session, the council voted to continue the conversation on Parc Northwest in the Aug. 9 regular session meeting 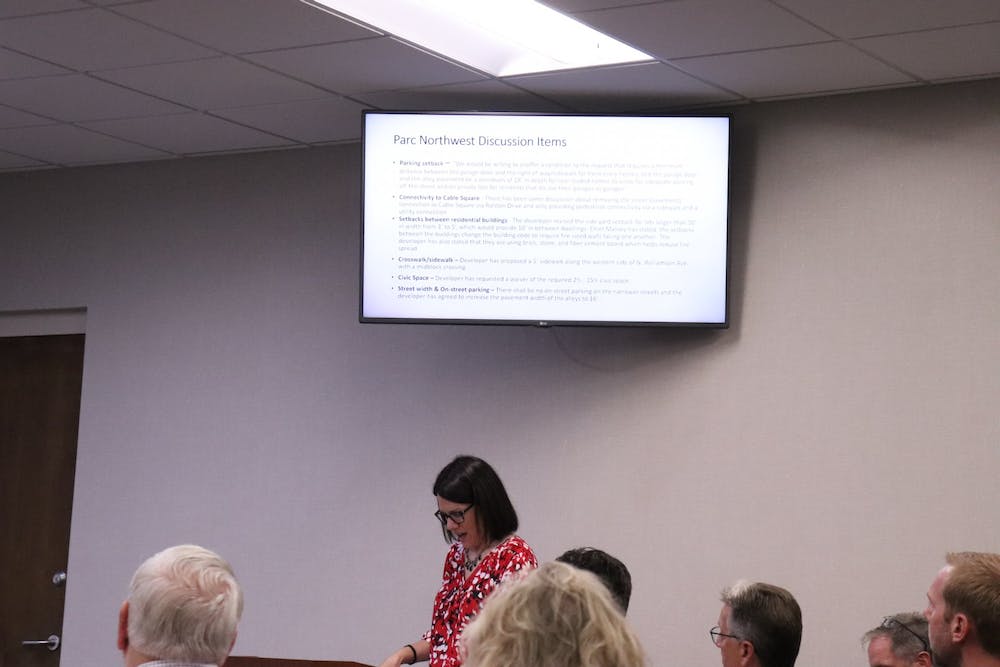 For the second meeting in a row, Elon Town Council voted during its July 25 meeting to continue the conversation about the rezoning request made by GreenHawk Development for the creation of Parc Northwest and delayed the vote until the Aug. 9 meeting.

The rezoning request is to create a mixed use development featuring houses, townhouses, businesses and greenspace. After multiple meetings regarding this development, Town of Elon Planning Director Lori Oakley gave a brief presentation summarizing the concerns raised at the previous meeting and changes developers have made in accordance with those concerns.

Oakley said GreenHawk Development changed the parking setback to a minimum of 18 feet between garages and alleyways to allow for adequate parking. After pushback from residents of the neighboring subdivision Cable Square, Oakley said the developers agreed to change their plan to include two connection paths through Cable Square to one road connection and one pedestrian connection. There also will be no street parking on narrow roads, and Oakely said the developers agreed to increase the pavement width to 16 feet.

Oakley said the setbacks between residential buildings will stay the same after modifications were made at the previous meeting to go from three-foot yard setbacks to five, in blocks larger than 50 feet in width.

Oakley also discussed the condition the developers included to create a five foot sidewalk along the western side of North Williamson Avenue. Council Member Monti Allison suggested the sidewalk could be moved to the eastern side of the street to allow for more connectivity with Elon University, but developer Jeremy Medlin said the suggestion is not viable because working with the university could raise more complications.

Town Manger Rich Roedner said the town is awaiting the completion of a North Carolina Department of Transportation traffic study before finalizing plans for the sidewalk, and as such, his recommendation was to make the wording in the condition regarding the sidewalk less specific to allow for changes.

“Even if that language were a little bit vaguer to allow these ongoing discussions, then we can secure the ability to develop and build on the easterly side, even if it's just the same distance as what they are proposing on the westerly side,” Roedner said. “From a long range standpoint, I'm trying to think what benefits the town better, in that I think we have an easier way of connecting sidewalks on the easterly side than on the westerly side.”

The developers were also looking to waive the town condition requiring developments to have two to 15% civic space. Mayor Emily Sharpe said civic space is currently not clearly defined within Elon’s land development ordinances. Oakley gave context for what kinds of buildings could be considered civic space and said the ambiguity is part of the reason developers are requesting the waiver.

“That's why the original project came in with the request for the waiver for the 2%, because we require a minimum 2%,” Oakley said. “I have seen in my career a small library satellite office. In a larger project where I served in the 2000s, in a community they developed, they set aside space for an elementary school, so it varies.”

Also during the meeting, the council approved two applications to the downtown advisory board. Town of Elon Downtown Development Director Jill Weston said these applicants had been interviewed and recommended by the downtown advisory board, and the board is currently looking to fill four of its seven open positions. One of these applicants is the owner of Pandora Pies and the other applicant owns property in downtown Elon, and the council unanimously voted to approve the applicants.

Weston also gave a presentation about Elon’s downtown master plan and requested the council authorize the town manager to negotiate the final contract and combine the master plan with Elon’s streetscape plan. The council motioned to vote on both items at the Aug. 9 meeting.