After council members had the chance to ask the developers and planning director questions during the July 12 regular meeting, they voted to continue the conversation in the July 25 work session meeting 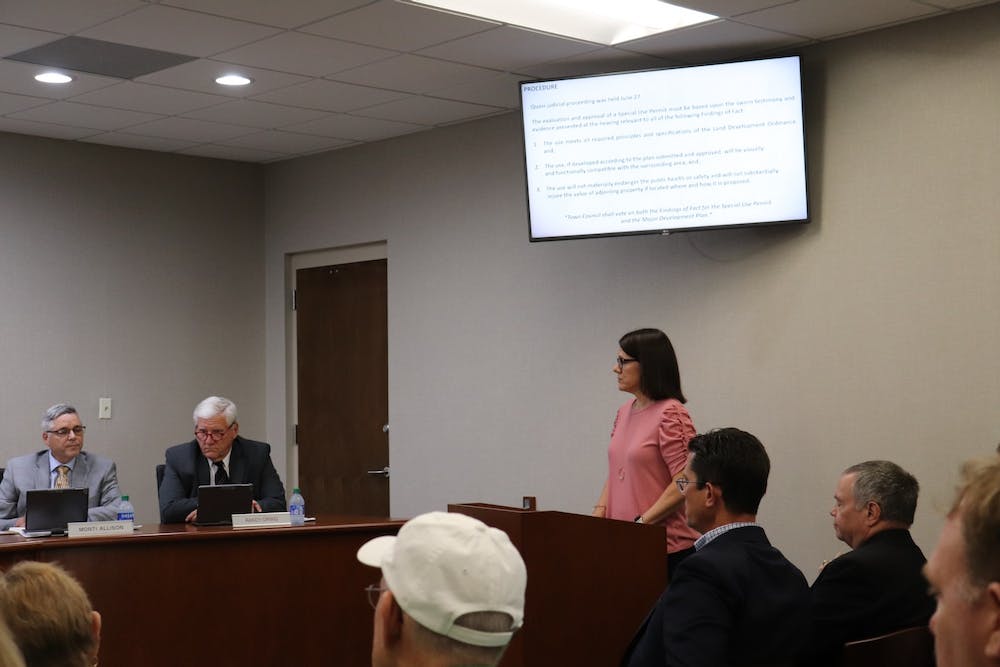 Elon Town Council voted to continue the conversation regarding the rezoning request made by GreenHawk Development, a firm which plans to create a mixed use development, Parc Northwest, in Elon. This decision came during the council’s regular meeting July 12, after a month that included a neighborhood meeting, technical review committee meeting and planning board meeting, as well as a public hearing where Mayor Emily Sharpe deemed this rezoning request one of the most contentious rezoning discussions she’s been a part of.

Robert Hagemann, town attorney, explained in greater depth the meaning of conditional zoning and the legislative process of approving the request, as according to Hagemann, conditional zoning is new to Elon. Hagemann said there is no deadline for approving this, and between council meetings, Elon residents and the council are encouraged to communicate with town staff and developers.

Hagemann said this flexible form of zoning is not tailored to a specific development project and allows the town council and any involved residents to add conditions through a series of negotiations of public hearings and meetings.

“The rules and regulations are sort of general and are not specifically tailored to a unique development project,” Hagemann said. “The beauty of conditional zoning is, as the word connotes, conditions are included.

Lorie Oakley, Elon planning director, further clarified conditional zoning and the specific changes that GreenHawk developers are requesting. Oakley also said the residential zone of the development has a traditional neighborhood development overlay, which provides an alternative to larger lots.

“It encourages developments of neighborhoods with small blocks, interconnected pedestrian-oriented streets and sidewalks, a mixture of building types, building uses and public open space,” Oakley said. “There is not a minimum or maximum lot size.”

Oakley also said that since the public hearing, the developers have revised the conditions of houses setbacks. Oakley said previously all houses had proposed side yard setbacks of 3 feet. Now, Oakley said, they are proposing for houses greater than 50 feet wide with setbacks of 5 feet. This will increase the distances between houses from 6 feet to 10 feet, and houses less than 50 feet wide will remain 6 feet apart from each other. This brought up concerns from multiple council members, including Sharpe.

Sharpe said even with some setbacks increasing, the short distance between houses is troubling to her, as she said the neighboring development Cable Square houses already feel close together.

“I actually went through and I wrote down the lot size of every lot in Cable Square,” Sharpe said. “These lots are all smaller. So I do have a concern about that because it is very small, and it's just problematic in my mind.”

A point of concern raised by Council Member Quinn Ray was the increased amount of traffic and how this would affect Cable Square, as two of the four points of entry to the development cut through Cable Square. The development's traffic engineer, Jeff Moore, said the entrances to Cable Square would only displace close to 10% of the traffic created by Parc Northwest. Moore also said traffic would even out with Cable Square residents going through Parc Northwest in one of the connected entryways.

“I ran some numbers,” Moore said. “If 25% of Cable Square residents decided to go through this development to get to NC100, University Drive, then that would pretty much even out the traffic that we'd expect.”

During the meeting, the council also voted to approve the special use permit and major development plan created by Elon University for the addition of a sign and bell tower by the entrance of campus on University Drive and O’Kelly Avenue. Oakley shared that since the June 27 meeting where the plan was first presented, the university has changed its plan from two signs to one.

Three more votes on new business were held, as well. First, the council voted to delay accepting a property donation offered by the family of William Henry May until a town staff member verifies the land does not have any environmental issues that could become a liability. Second, the council also voted to cancel its Aug. 22 work session.

Third, the council voted to approve July as Recreation and Parks Month and July 15 as Park and Recreation Professionals Day. These proclamations were read by Sharpe and were approved to recognize Elon’s Recreation and Park’s employees. Sharpe also read a proclamation to commemorate the 100th anniversary of Elon’s First Baptist Church with the creation of Elon First Baptist Church day on Aug. 7. Elon’s next council meeting will be July 25 at 6 p.m.