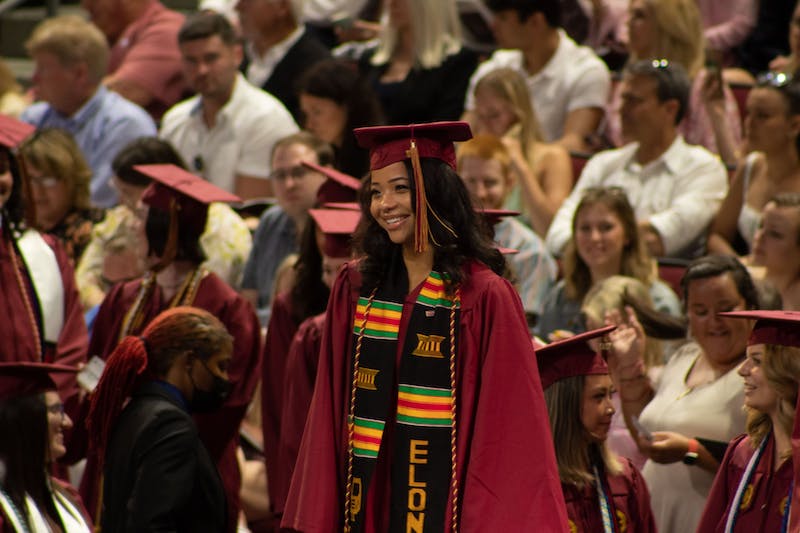 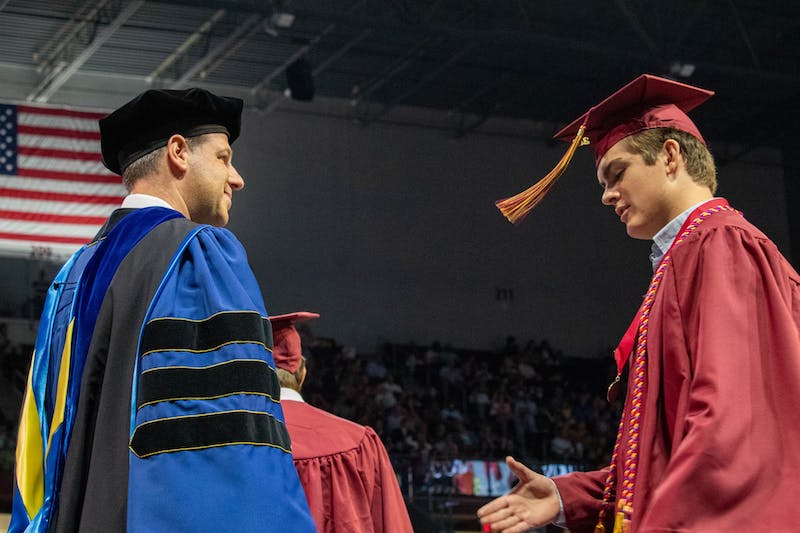 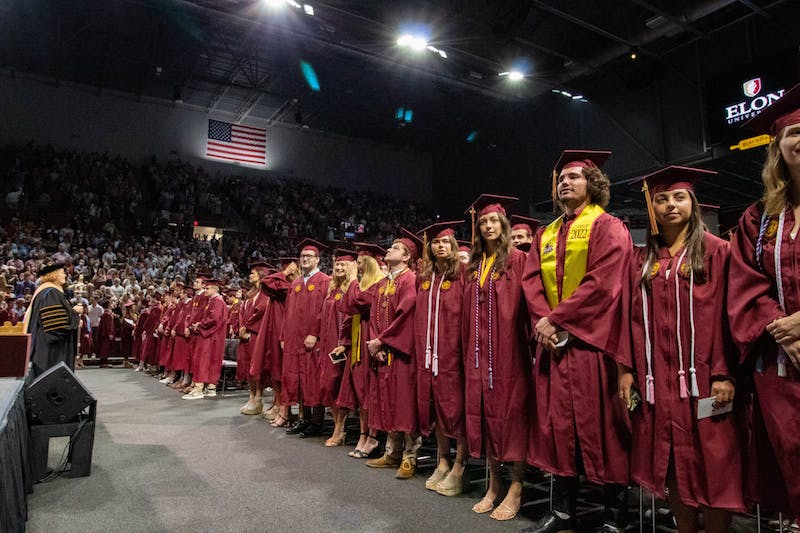 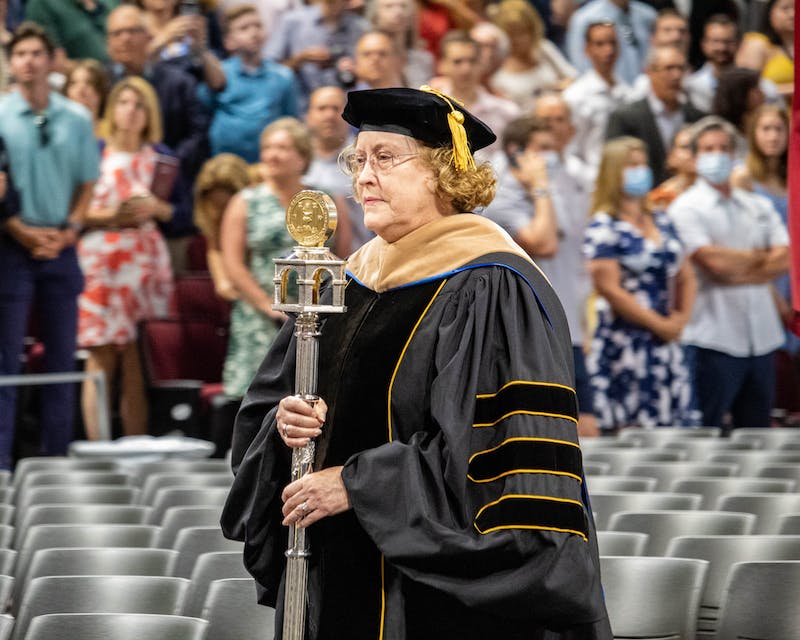 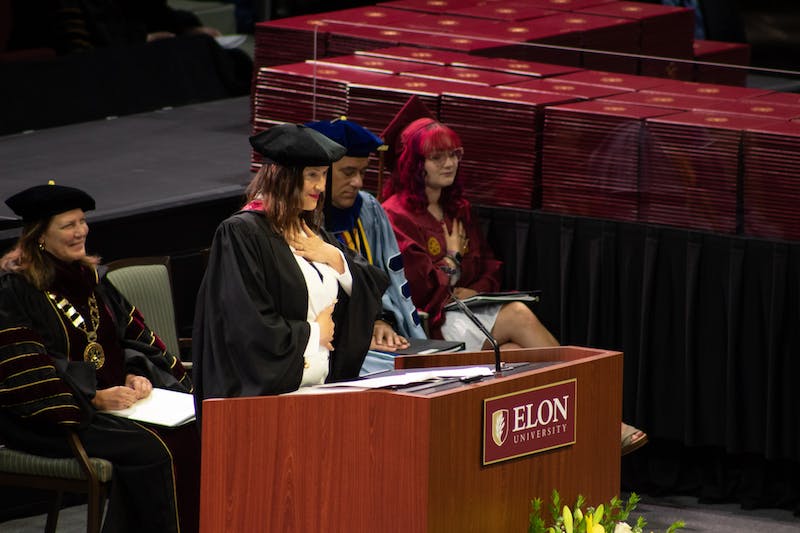 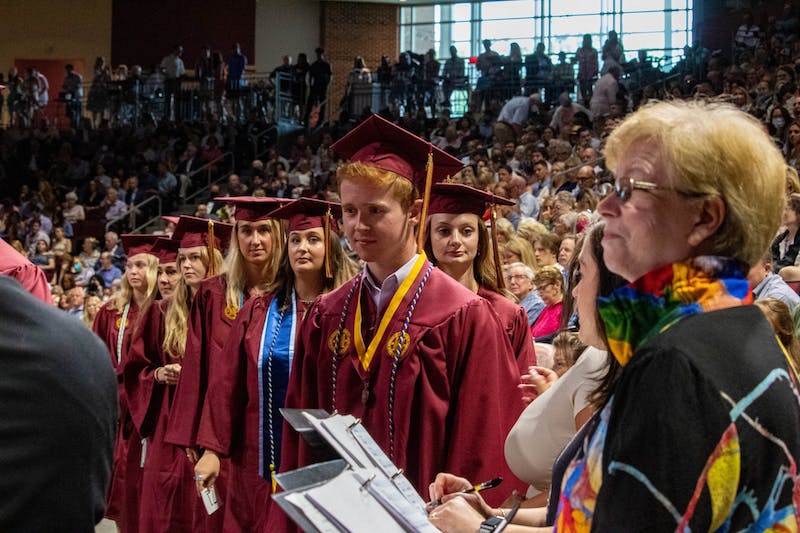 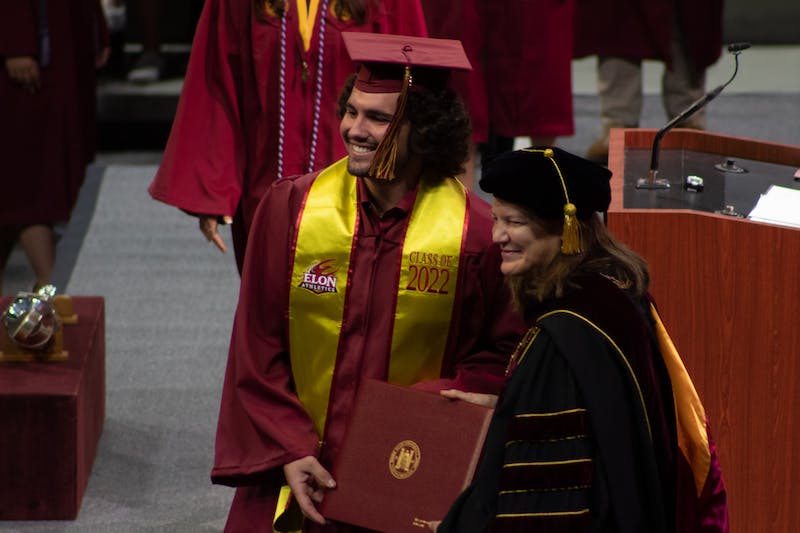 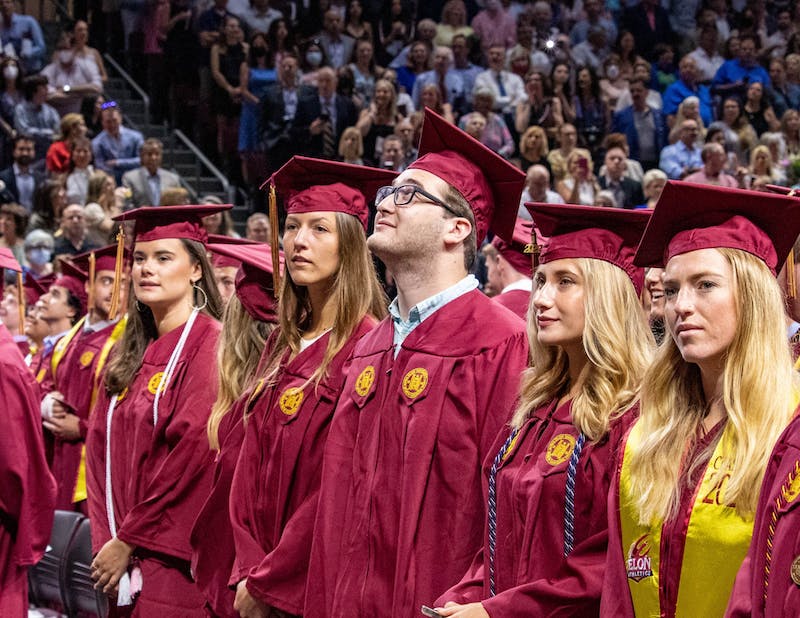 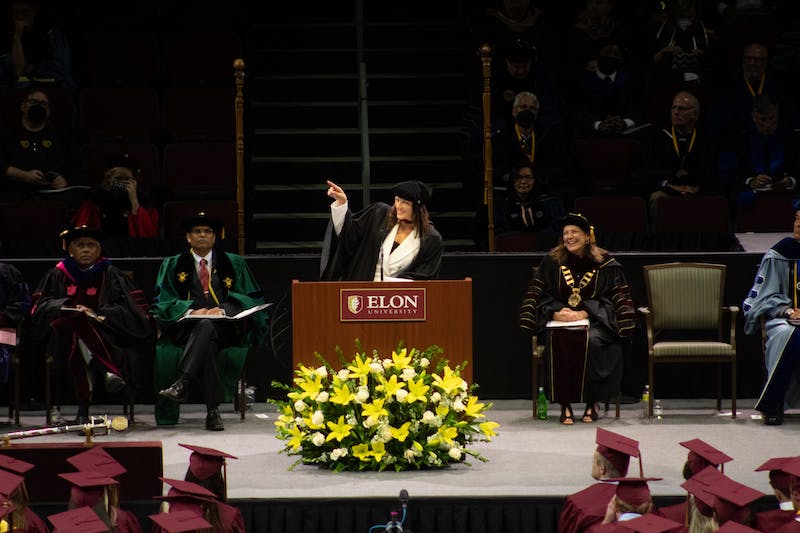 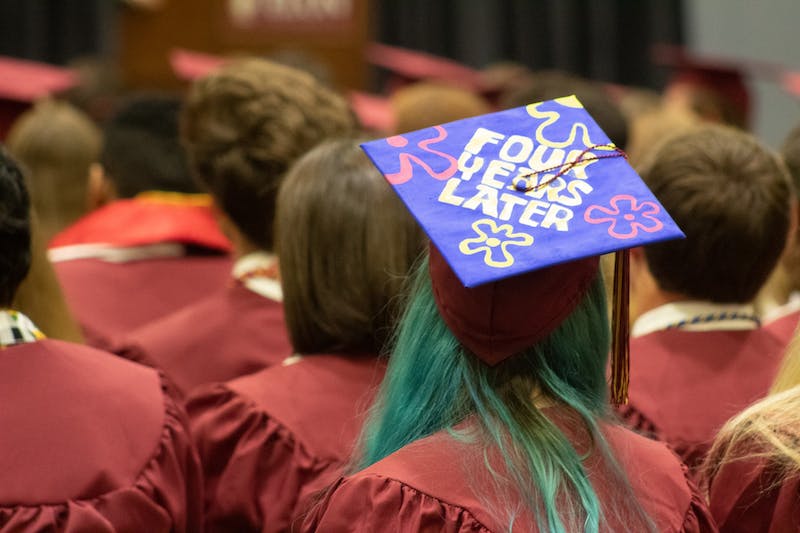 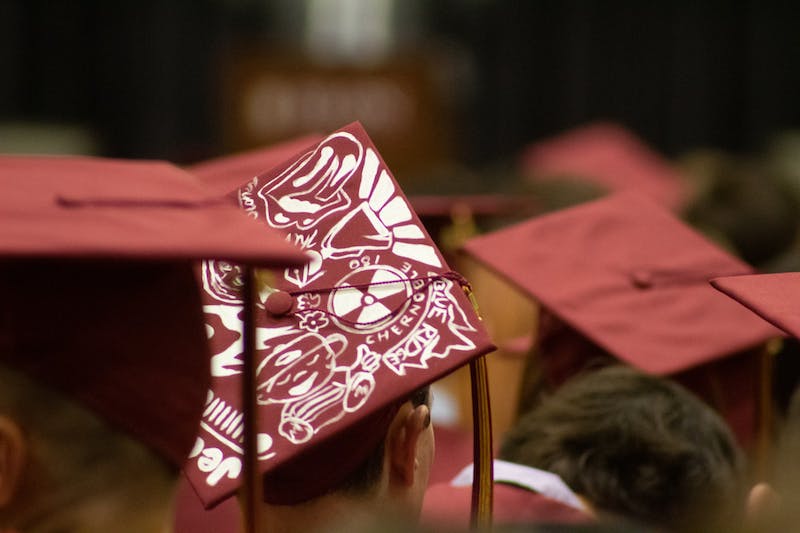 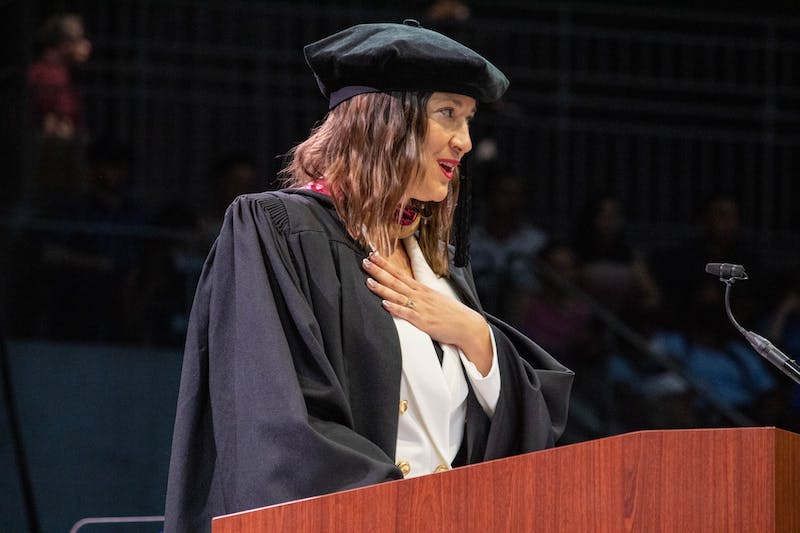 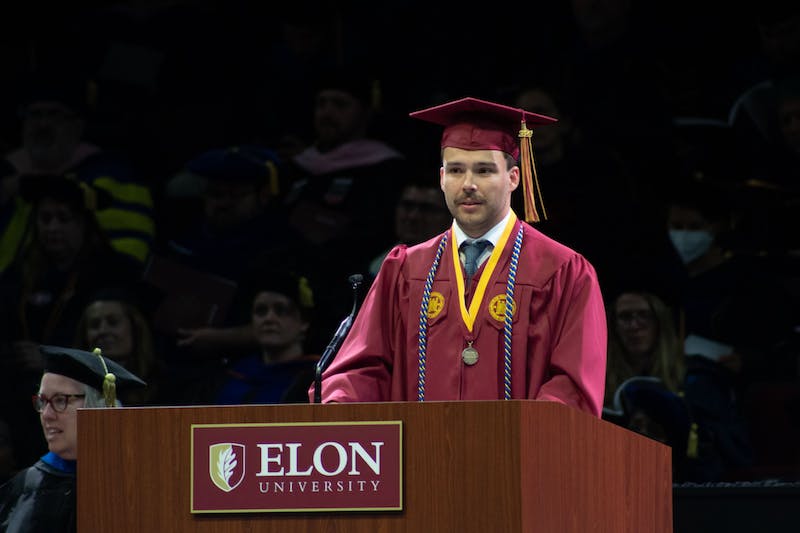 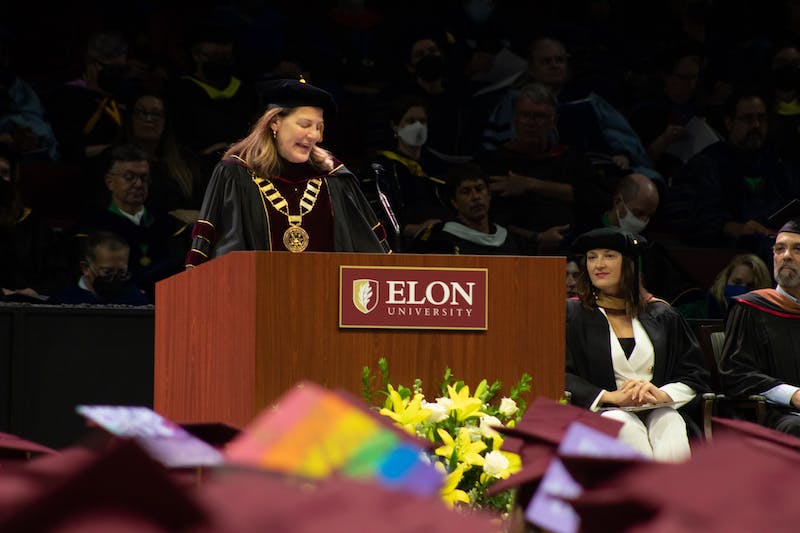 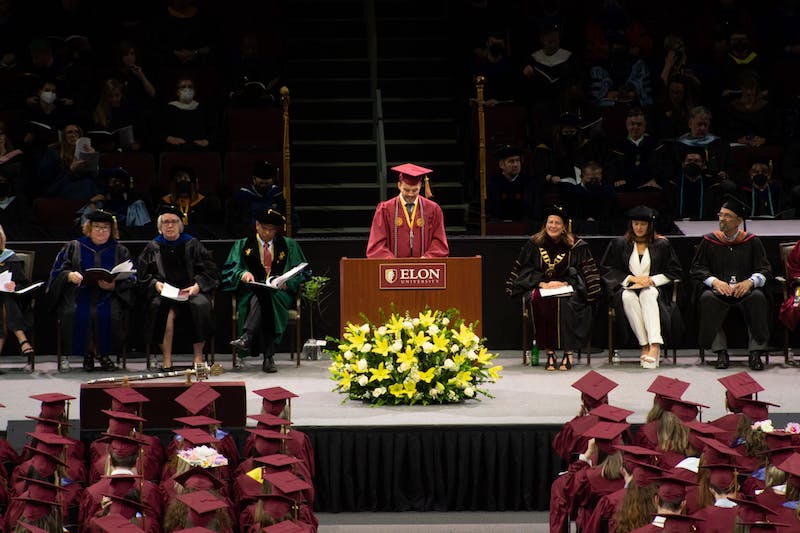 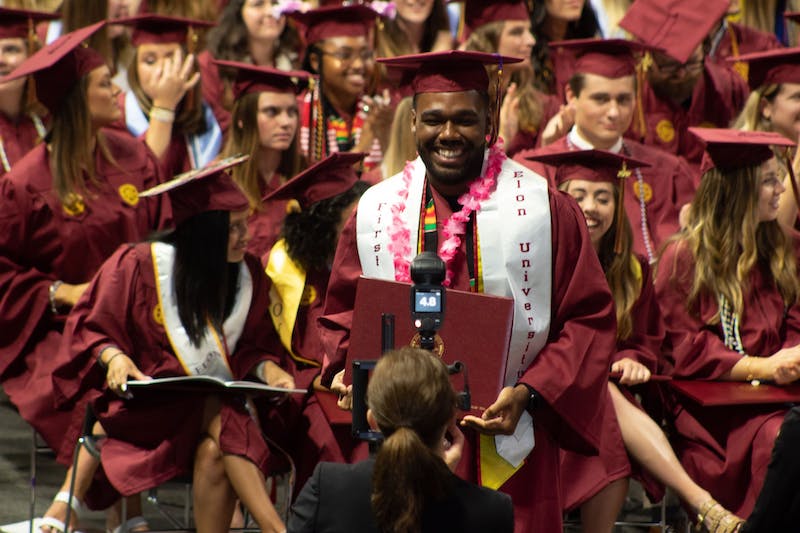 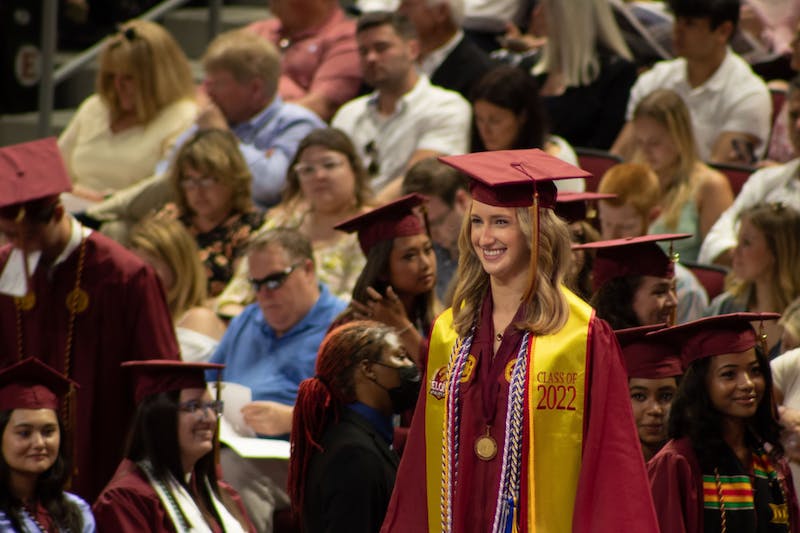 Updated as of May 20 at 5:08 p.m. to include additional information on commencement speakers and photographs from the second ceremony.

Senior class president Liam O’Connor shared a message of appreciation with the graduates, whom he acknowledged have faced an abnormal college experience — from the COVID-19 pandemic to the 2019 mumps outbreak on campus.

“We didn’t have the college careers that are advertised to us in the mail we received in high school,” O’Connor said. “We were baptized by fire and told to grow faster and adapt more than any class before.”

O’Connor reflected on the day when the students first received their acorns. He said each one represents a piece of the graduating class, including the values they were raised on and their entire educational journey.

“You brought yourself to this Elon soil,” O’Connor said. “We didn’t know what was beneath that topsoil. As we started to grow, we spread roots, discovering the richness that was beneath that top layer that was so-called advertised to us in the brochures of Elon. There were syllabus weeks, J-Terms and endless hours to hunt for free food. Elon became a second home like no other.”

O’Connor praised his fellow classmates for their ability to adapt and adjust during their collegiate careers and said this growth will take them far.

“You should be proud of this metamorphosis,” O’Connor said. “Moving is hard. But stagnation is harder.”

This celebratory sentiment for the class and its handling of the last few years extended throughout the ceremony.

Best-selling author and host of the “UNprofessional” podcast Hilary Corna ‘07 gave this year’s commencement address. Corna said this is the first ceremony where both the university president and commencement speaker were women.

Throughout her speech, Corna said the graduates are in charge of their own future, but they should not fear loss. Rather, they should embrace change.

“People in the world want to know who you are in your core,” Corna. “They want to look you in the eyes and see your soul.”

Corna called the present a time for original thinking and encouraged graduates to speak up in their everyday lives and their workplaces. She said nothing is permanent, and it is OK for the graduates to change their minds.

University President Connie Book, like Corna, said today was just the beginning for these graduates.

The class of 2022 is Book’s first graduating class. As she became the university president in 2018, the graduating class entered as freshmen. And while Book wishes she could say it feels like yesterday, she said the events of the past four years have made it feel like a very long time.

To end the ceremony, Book circled back to the symbolic journey of an Elon student transforming from an acorn to an oak sapling. As she held the sapling, she spoke of Elon’s Hebrew meaning and the university’s long-standing traditions.

Counting down from three, Book then led the class of 2022, now alumni, in one final tradition: