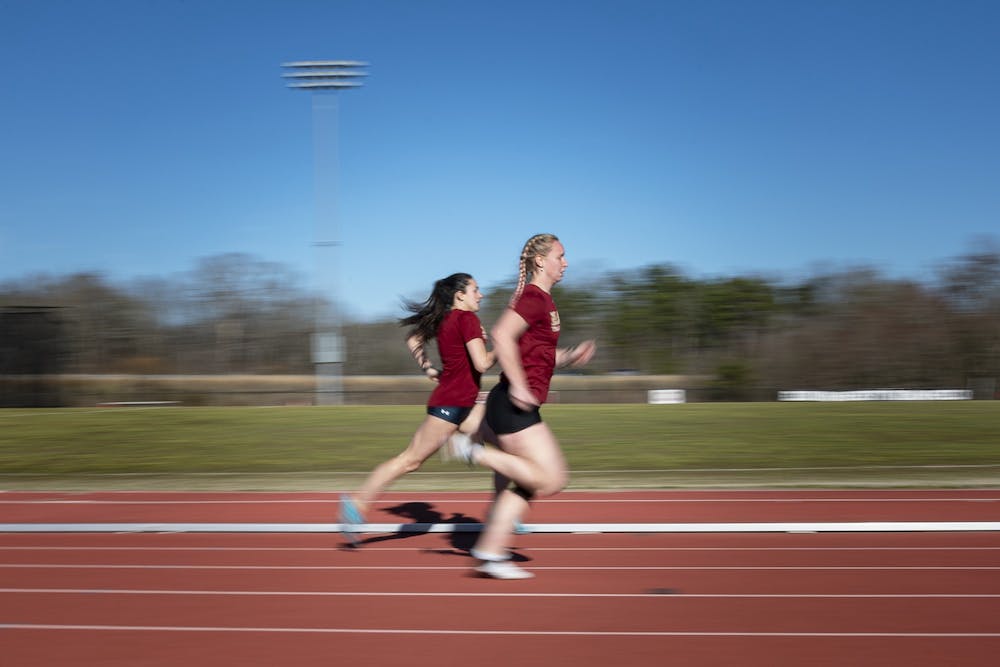 For Lorenz, being a part of the recent success of Elon’s track and field and cross country programs has been a great experience, but she said it also creates high expectations for each championship event they go into.

“It’s added pressure because it’s hard to win a title, and then it’s even harder to defend it,” Lorenz said. “Especially for track and field, the competition is really good, and it’s not as predictable as cross country.”

Elon will travel to Boston to compete in the 2022 CAA Women’s Outdoor Track and Field Championships from May 6 to 7 at Northeastern University’s Solomon Outdoor Track facility. Elon won last year’s team championship — its third CAA title since joining the conference in 2014.

After finishing eighth in the previous championships, Lorenz will again compete in the 1,500-meter race and is excited to contribute to the team’s score this weekend.

“For most of us, it’s the highlight or the peak of the season,” Lorenz said. “We hope to defend our title. It will be hard, but I think everyone is fired up to give their best.”

Freshman Jette Beermann was also part of Elon’s championship-winning cross country team this season. Beermann, who had limited experience running cross country before arriving at Elon, won CAA Newcomer of the Year for the sport and said the experience propelled her to a successful first track season.

“Coming in, I had no clue where I would be on the team,” Beermann said. “I was just like, I’ll do my best, and I didn’t put any pressure on me, and that was great. To score and help the team was great.”

According to sophomore Piper Jons, there is more pressure to perform well at this year’s championship than last year’s. Next season, North Carolina A&T State University will join the CAA, and Jons said the Aggies are expected to become the favorite in the conference.

“They are very competitive, and they’re going to be really hard to beat,” Jons said. “I feel like that is especially giving us more motivation because we want to do it now because it’s going to be even harder next year.”

Jons will compete in the 4x100 and 4x400-meter relays and the 200 and 400-meter races. Jons said she hopes to perform well in all her races to help the team’s chances in the team championship.

“It’s going to be a lot on my body, but I’ll do it for the team,” Jons said. “After this meet, we’re all done, so we might as well leave it all on the track.”

Elon will begin competing in events on the morning of May 6, which are qualification trials for finals on May 7.

Although this will be Beermann’s first CAA Track and Field Championships, she does not expect to be nervous and looks forward to cheering on her teammates in their events.

“I’m just really thankful to be here,” Beermann said. “I’m excited to see everyone race again because that’s honestly so much fun, just seeing everyone else compete and do their best.”