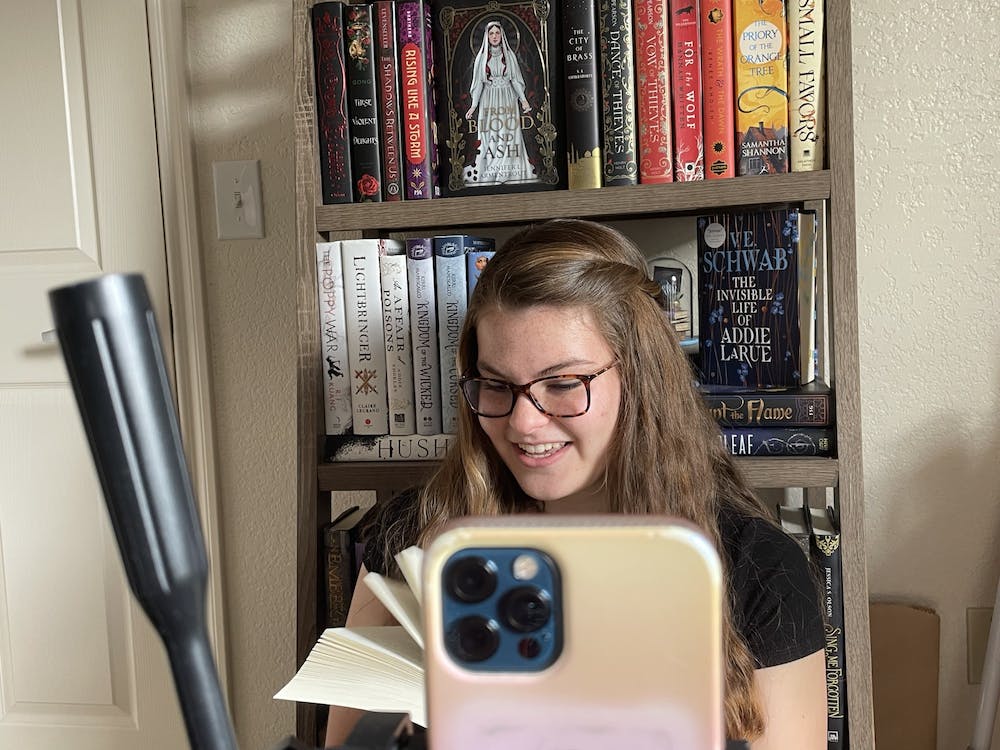 Photo by Cailey Rogers | Elon News Network
Junior Campbell Stetson creates a TikTok on May 2 in her Elon Oaks apartment. Stetson, who has over 64,000 followers on TikTok, is part of a niche TikTok community called "BookTok," which is centered around a love of reading fiction.

The rays of sunlight peeked through the half-open blinds, illuminating a rainbow of book spines as Campbell Stenson reached across her bed and snoozed the beeping of her 6:30 a.m. alarm. It was the start of another day of teaching, working and studying — the routine that has defined the entirety of Stenson’s junior year at Elon University. But the sight of the dozens of hardbacks that house her most cherished stories reminds her why she decides to get out of bed every day.

Stenson lives to read and to share her passion with the world. And she does exactly that through an app on her phone: TikTok.

As she got out of bed, Stenson unlocked her phone and headed straight to her TikTok account hoping to see an increase in views and likes on the video she posted a few days ago. It was only at about 3,000 views. She quickly turned her phone off again, frustrated.

When the COVID-19 pandemic left people isolated in their homes, leaving some eager to forget the harsh realities of the world, Stenson found respite in a niche TikTok community called “BookTok,” centered around a love of reading fiction. But what was at first a fun and simple distraction, being a BookTok influencer soon skyrocketed into a means of reigniting her booklover identity, earning a small profit and jumpstarting her dream career as an author.

“It is important to me because, as cheesy as it sounds, it's part of who I am now,” Stenson said. “It’s something I do all the time. And I just value the back and forth with other creators who enjoy the same things that I do.”

With over 63,000 followers and 1.9 million likes, Stenson said she makes her BookTok account a priority and keeps herself on a strict schedule to maintain a consistent following while still juggling her academic responsibilities.

Every Monday, Wednesday and Friday at 4 p.m., a new video from the account @bookswithcam pops up on thousands of phone screens with a new recommendation, a book haul or reading vlog. Stenson said she posts at these times religiously after discovering a way to navigate the TikTok algorithm and post at the exact time before most of her followers will open the app. She said her account wouldn’t stay afloat without likes and follower engagement.

Even with her rigid posting routine and tactful analysis of analytics, Stenson has ensured that the administrative side of BookTok never overshadows her passion for reading.

At 7 a.m., before heading off to an elementary school in Burlington to work as a teaching assistant and fulfill a requirement for her elementary education major, Stenson tackled the first order of business: read at least one chapter of whatever book currently sits on her bedside table. This could range from a binge-worthy romance to an 800-page epic fantasy.

No matter what story awaits her, she can’t help but remember the first books that made her fall in love with literature. The “Maximum Ride” saga by James Patterson was not just Stenson’s favorite series in fifth grade, it was her prized possession.

“I still have the first book, and it’s all crinkled and broken,” Stenson said. “But I really liked reading once I started reading ‘Maximum Ride.’ I read it over and over and over again because nothing could compare.”

Stenson said she must have read the eight-book series at least 10 different times. Her instinct was to share that love with the world. In middle school, she once spent hours crafting a shirt with iron-on printable paper, which featured every single one of the “Maximum Ride” characters, and she wore it to school. She was eager to show the world the books that felt like home and the characters that had become her best friends.

But the other kids at her school weren’t as enthusiastic. Back then, reading and obsessing over a fantasy series was something to keep hidden or risk being ridiculed for.

“I wore it to school one day on one of our spirit days where you could wear whatever you wanted,” Stenson said. “And they tore me apart for it. I mean, I had to turn it inside out.”

“Did they like your shirt?” Stenson’s mom had asked her when she got in the car after school that day.

“No,” she answered. She never wore that shirt to school again.

Getting bullied for loving a book series was enough for Stenson to start repressing the part of herself that craved reading about fictional worlds. It was only after being in quarantine that she rediscovered her passion — BookTok not only showed her that she wasn’t alone, but it allowed her to connect with others through mutual love of reading, which had previously been her fifth grade dream.

Stenson doesn’t just have a platform where she can freely and proudly share her bookworm persona — she has to compete with hundreds of other creators that are doing the same thing. While being an avid reader was once considered to be too nerdy or embarrassing, it has now become one of the most popular fan bases on social media. According to an article published in 34th Street Magazine, the BookTok niche reached 42 billion views as of March 2022.

But it’s more than that. Stenson still feels the need to prove to herself that pursuing her passion for consuming and creating young adult literature is something worthwhile. As she watches other accounts surge in popularity while hers falls behind, it only gets harder to feel confident in that regard.

“I know it's not a competition,” Stenson said. “But I know the people who joined BookTok around the same time I did because we all usually followed each other. And we’ll all watch our accounts grow, but we also watch who's not growing.”

As hard as it is, Stenson is still trying to adopt that mindset and accept her platformas a worthy endeavor, no matter the numbers.

While Stenson often feels blinded by the attraction of gaining more views and likes, her roommate, senior Nikki Cronin, sees her BookTok for what it really is: a way to bond with people that share similar interests. She has witnessed the dedication and passion Stenson consistently invests in her videos, and in Cronin’s eyes, that in itself is a success.

Like Stenson, Cronin was first drawn into the BookTok vortex when the pandemic began. At first, she was just excited to find a community of people that enjoyed reading as much as she did but BookTok has not just helped her build connections with people through a screen, it led her to make true friends in her real life as well.

Without their mutual love of books, Stenson and Cronin would have never connected, let alone decided to live together.

“BookTok is something that has really drawn us together,” Cronin said. “It’s just really nice to talk to someone that also enjoys reading as much as I do.”