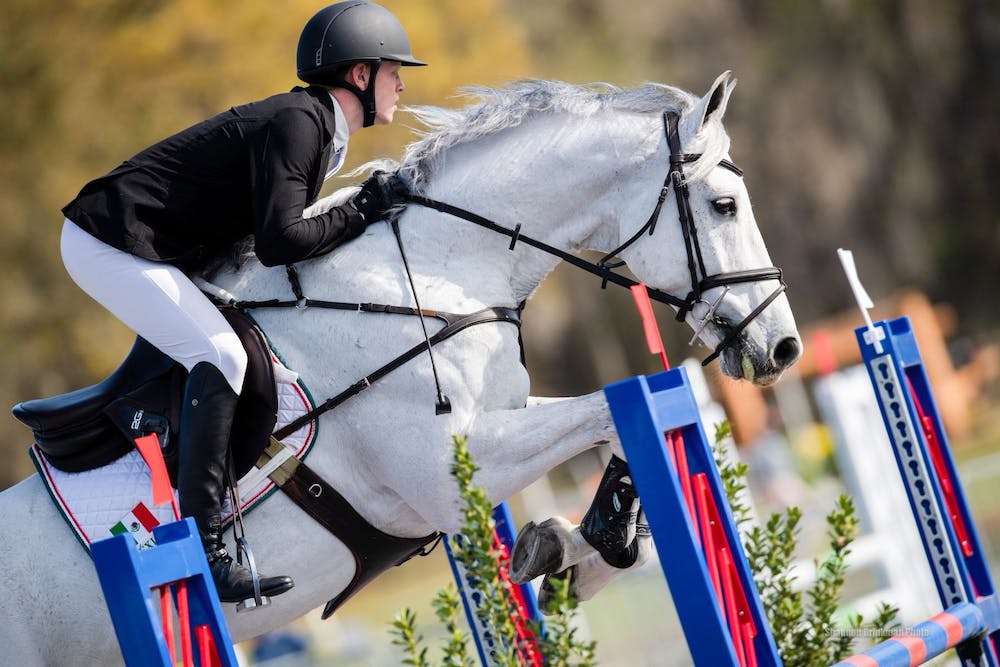 When freshman Alan Montemayor tried horseback riding in seventh grade, he despised it because he felt he knew nothing about the sport.

Two years later, at his sister’s riding camp, her trainer asked Montemayor to try again, and this time, the challenge of complicated jumps and rough terrain caught his eye.

“In this farm, there were a lot of fields with different jumps,” Montemayor said. “I just found that really cool.”

Now, Montemayor trains horses every day in Alamance County. Riding his own Argentinian gray horse, Courage Son “AZ” Z, and others in the area, Montemayor competes in eventing, which consists of dressage, show jumping and cross country.

Eventing is a relatively small sport in the U.S., with the United States Eventing Association holding only 250 competitions per year.

Before finding his love for horseback riding and participating in competitions, Montemayor  took a gap year after high school working at Overlook Farm for Sara Kozumplik, a five-star eventer — the highest ranking — in Berryville, Virginia.

“I decided to take that gap year, not only because of COVID, but because I wanted to just dedicate good time to the horse,” Montemayor said.

Montemayor said that his gap year was mentally and physically taxing due to long hours and little social interaction, but he learned a lot.

“I knew that this was not forever,” Montemayor said, keeping in mind the opportunity he had to learn.

Head groom Sara Kelson said she watched Montemayor grow in maturity and riding during his year.

“He came to us not really knowing anything,” Kelson said. “He had the mentality of, ‘I want to learn, I want you to teach me.’ He’s very open-minded in that sense.”

Montemayor said he was grateful for his year at Overlook Farm, but realized that pursuing a career as a professional eventer was too high a commitment for him, and left little room for family and travel.

Montemayor currently rides at the two-star level, and while he doesn’t want to pursue eventing professionally, he has goals for riding at the three-star level by the end of 2022. He plans to compete in the Central American and Caribbean Games in spring 2023 and the Pan American Games in fall 2023.

One of Montemayor’s proudest moments was competing in eventing at the Kentucky Horse Park in summer 2021. He said that he didn’t think we would complete even half of the challenging course.

“I started crying when I was galloping,” Montemayor said. “It’s crazy, it’s never happened to me, but I was so proud of my horse for wanting to do well and caring enough about me to actually try hard. It kind of goes to show the kind of relationship we’ve been able to build.”

Fellow rider and junior Katie Cox, also enjoys horseback riding, despite it being a demanding sport. Her horse, Constantine, is a 7-year-old Swedish Warmblood with whom she shares a strong bond.

“If you don’t love it wholeheartedly, you can’t stay in it, because it’s a sport that will chew you up and spit you out,” Cox said. “It’s all built on your knowledge, the horse’s knowledge and your bond. It takes years to develop that.”

According to Cox, a tight bond between the horse and rider is extremely important in order to succeed, and at the recent Horse Show in the Sun Circuit in Ocala, Florida, Cox said she was reminded of that connection with her own horse.

“I may not have won anything, but it was one of the best experiences I’ve had with him, just because he was really excited to be there,” Cox said.

Kelson also said she recognized this important connection between human and horse.

“They’ll try extra hard for you because you have that bond,” Kelson said. “That kind of unspoken bond is one of the greatest things ever.”

Montemayor loves the thrill of riding, but said that he gets nervous in the seconds before starting a competition.

“I just start doubting myself. Why am I doing this?,” Montemayor said, but the adrenaline kicks in once he begins riding. “Well, I’ve already started galloping, there’s no turning back.”

Another riding goal Montemayor has is to compete for Mexico in the 2024 Olympic Games. Eventing is currently small in Mexico, with only 38 horses from Mexico were registered in 2018 with the Fédération Equestre Internationale, an international organization that governs equestrian sports. While Montemayor is unsure whether this goal is attainable yet, he said he is proud of how much he and his horse have grown.

“We’ve been through stuff together and we’ve come out of it together,” Montemayor said.