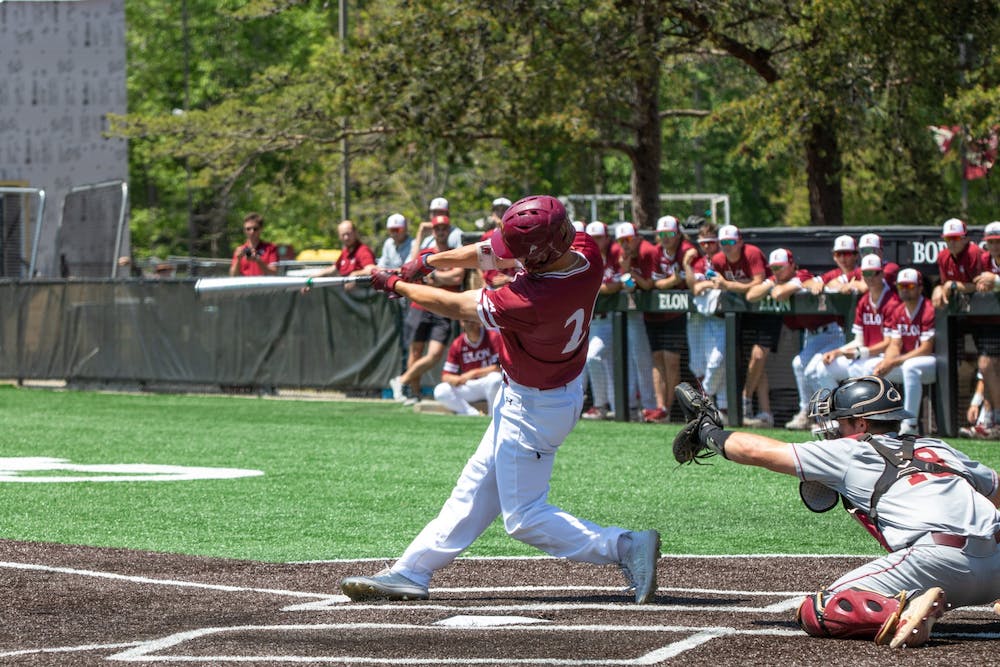 
Redshirt junior designated hitter Luke Stephenson swings at a pitch during Elon’s 8-3 loss to College of Charleston on April 24.

WILMINGTON – Entering the ninth inning against the University of North Carolina Wilmington Seahawks, the Elon University baseball team trailed 1-0. However, a late rally propelled Elon to a 2-1 win, ending a three-game losing streak.

With one out in the top of the ninth, junior designated hitter Luke Stephenson hit his team-leading ninth home run of the season to left field to tie the game for Elon. That home run was just Elon’s fifth hit of the game.

After sophomore pitcher Ben Simon struck out the final two Wilmington batters in the bottom of the ninth, Elon quickly put two runners on base in the top of the 10th. With one out, sophomore right fielder Alex Iadisernia struck out swinging but Wilmington’s catcher could not hold on to the ball, allowing redshirt junior second baseman Carlos Marte to score and give Elon a 2-1 lead.

Simon remained in the game for the bottom of the 10th inning. Wilmington’s lead-off batter reached first base after being hit by a pitch but Elon got the first out of the inning on a sacrifice bunt. With Wilmington’s runner on second base, Simon posted a pop out and a strikeout to end the game.

Elon finished the game with six hits and eight runners left on base. No Elon player had more than one hit.

Redshirt senior pitcher Brian Edgington started on the mound for Elon. He gave up a home run in the fifth inning but allowed just three hits and struck out eight Wilmington batters. He threw 103 pitches before Elon brought in redshirt sophomore Liam Dabagian in the seventh inning.

Simon earned the final seven outs for Elon. He struck out three batters and allowed just two base runners in his 2.1 innings.

The win is Elon’s first against a Colonial Athletic Association opponent since April 10, when the Phoenix defeated Northeastern University 1-0. Elon is now 4-9 this season in CAA games.

Elon will play Wilmington again tomorrow and Sunday, with tomorrow’s game scheduled to begin at 4 p.m.