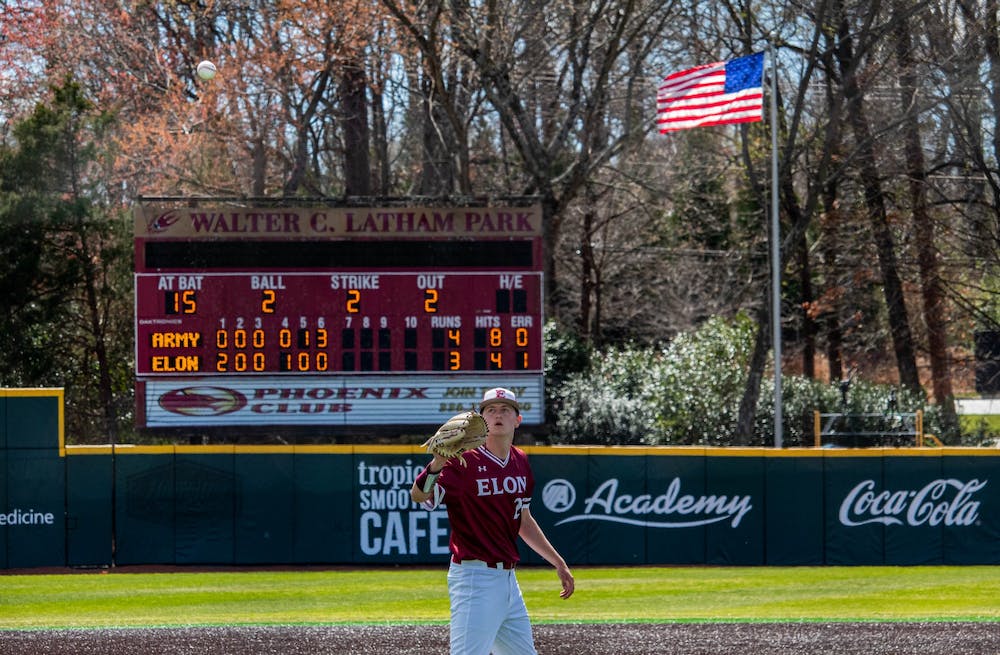 Photo by Joseph Navin | Elon News Network
An Elon baseball player prepares to catch a ball during the game against the Army Black Knights. Elon lost 5-6.

BOSTON –The Elon University baseball team split a doubleheader against the Northeastern University Huskies on Sunday, losing the first game 1-0 and winning the second game 1-0.

The first game consisted of a pitching duel between the Huskies and the Phoenix with redshirt senior Brian Edgington leading the way for the Phoenix on the mound. Edgington pitched eight innings while only allowing two hits, one earned run and eight strikeouts to lead Elon.

However, that one earned run was the deciding factor in the matchup as the Phoenix fell to the Huskies, 1-0. Elon University could only muster one hit in the game, which was off the bat of graduate student third baseman Samuel Frontino for a single in the top of the eighth. The dominant performance from the Huskies’ pitching staff was too much for the Phoenix to handle, as Elon University fell to 0-2 in the weekend series against Northeastern University.

The Phoenix’s pitching staff held Northeastern University to only three hits in game two of the doubleheader. Freshman Shea Sprague threw seven scoreless innings and only conceded one hit and two walks. Redshirt junior Kyle Greenler took over for Sprague on the mound in the eighth and shut down the Huskies in the final two innings to secure the road win.

Elon’s offense scored just one run but a single from redshirt freshman shortstop Will Vergantino that scored redshirt sophomore right fielder Alex Iadisernia in the top of the fourth inning was all the Phoenix needed as Northeastern’s offense did not score.

The Phoenix will be looking to capitalize on this win as the team looks to make a mid-season push. Elon returns to action on Tuesday, April 12, against the East Carolina University Pirates in a non-conference game.