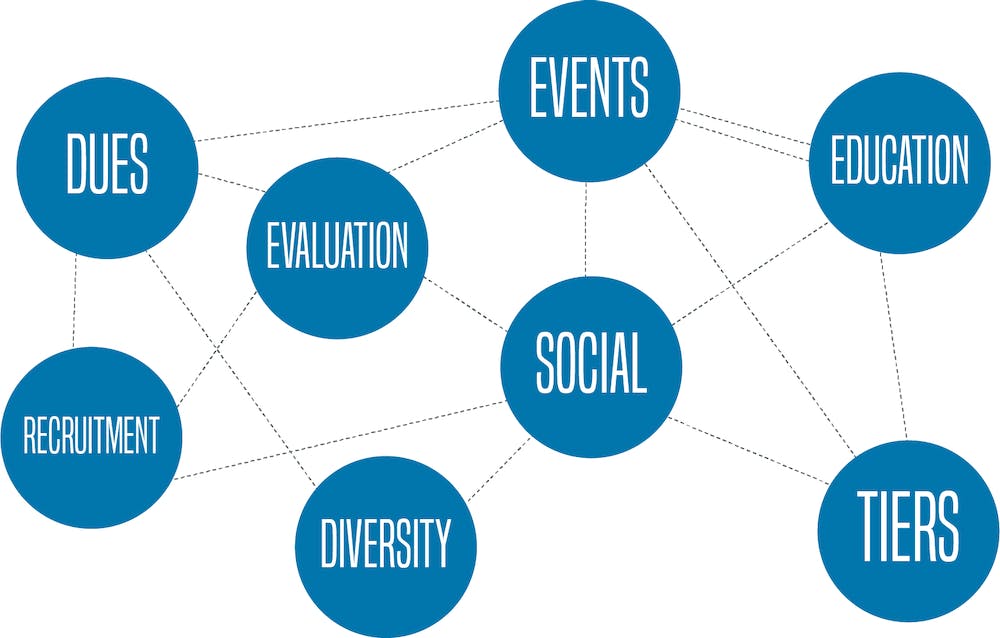 Photo by Caroline Mitchell | Elon News Network
Over half of women on Elon’s campus are in Greek life — 54.5%, according to Elon University.

Author's Note: I speak of my experience in Elon Panhellenic and the conversations I’ve engaged in with others. I’m learning more to better understand the movement as a whole, and the calls for reform that people of color, amongst others, have collectively called for in recent years across the country.

Greek life has larger issues beyond just one college’s Panhellenic organization that extends to national and fraternity organizations as well. As a person formerly in Greek life, I’ve grown to understand my complicity and the naive approach I took of believing “that’s just the way it is.” I hope to add just one perspective to the greater conversation, as there are many that go untold.

As the sorority events pile up in the spring semester, the buzz of Greek life always dominates conversations of Elon, my own included. While we recognize the issues of Greek life in passing comments or brief conversations, the narrative continues to not only exist, but thrive, that Greek life reflects an intrinsic value about people. Since my first year at Elon, I’ve engaged in conversations with administrators, Greek life members and completely random strangers — all of whom expressed concern for the harmful effects of Greek life. Yet, as my senior year comes to an end, the system, and thus the narrative, around Greek life fails to become recognized as a serious and legitimate issue our campus needs to address. Greek life creates damaging mindsets and atmospheres for those both affiliated and unaffiliated. You may not feel the damage, and you may not even recognize there is damage to begin with. But that doesn’t make it any less real, or any less vital for our attention and action.

As I recall the day before recruitment, all the potential new members gather in a large auditorium to listen to a speaker talk about the next few days and her own experience with rush. She reflects on her anxiety, her anticipation, but her eventual happy ending on bid day in her sorority. It was repeated over and over to “just trust the process.” So I did. I was convinced that recruitment would be an experience of meeting other women who just wanted to get to know me. And then I got to recruitment, and the process of evaluating me began.

During recruitment, I felt discriminated against for being Asian American. I wasn’t what they wanted. I knew my experiences could never match theirs, and sometimes neither would my values. I wouldn’t share things in common because the reality was we were different. I forced myself to push away the anxiety, when the reality was I was so uncomfortable standing in a room of girls who looked all dressed up and gorgeous, but absolutely nothing like me. How do you explain the feeling of a stranger looking you up and down and knowing, even though they might not realize, that they are analyzing anything they can about you — the things you share about yourself, your outfit, your conversation skills. Then, they get to make conclusions about who you are, all of which lead to the final decision about you. The claim is that they want to see how well I aligned with their “values,” but to what extent could they truly determine this? In a ten-minute conversation, are they truly analyzing who I am? The reality is they analyzed the initial impressions of appearance. No person is limited to that time, that process, or that evaluation. It was the concept of this process that made me so self-conscious about who I am, and I just couldn’t stop thinking about my race. And the worst part was, I had nothing to “prove it” — just my experience.

Though I ended up in an organization, I was left so deeply unsatisfied. Not because of the organization I chose, but because of the way the process, and the system, now made me think about myself and others. It’s hard enough to see a lack of diversity on campus, but it’s even harder when the school’s social structure reflects standards and stereotypes that aren't diverse. Instead, we encourage specific molds of women. The constant conversations filling the air to this day infuriate me; nevertheless, I unconsciously engage in them. “What sorority are they in?” “Oh. She’s unaffiliated.” “She can’t come, she’s not in the sorority.” I kept thinking to myself: “How did my Elon experience now become this?” Even more prominently, “How did people become this?”

After dropping my organization, I faced isolation because I was no longer contributing to the system. I wasn’t ‘in’ anything anymore; I was ‘out.’ Eventually, I was lucky to have found other people and other organizations where I was more than just an initial appearance. As I entered new spaces on campus, I embraced the refreshing diversity of thought that came from diversity of experiences. However, that fresh breath of air wasn’t immediate. Living in an environment where the constant and core understanding of people is rooted in a system so broken from beginning to end is suffocating. I want to use my experience, not for sympathy, but for advocacy.

The concept of ‘sisterhood’ holds a special bond and meaning between groups of women. It can go so far that it blinds us to the point where we feel uncomfortable being critical of each other, or uncomfortable advocating for people beyond the Greek life system. I urge people to step outside of that sisterhood and understand the perspectives of other women — women not in your immediate sisterhood. Step outside of yourself. The late scholar bell hooks reflected on this “shield against reality” that we allow ourselves to hide under in her article “Sisterhood: Political Solidarity Between Women,” writing:

“Women are divided by sexist attitudes, racism, class privilege, and a host of other prejudices. Sustained women bonding can occur only when these divisions are confronted and the necessary steps are taken to eliminate them. Divisions will not be eliminated by wishful thinking or romantic reverie about common oppression despite the value of highlighting experiences all women share.” hooks then went on to connect these concepts to the term “sisterhood.”

“We must unlearn them [assumptions of women] if we are to build a sustained feminist movement. We must learn to live and work in solidarity. We must learn the true meaning and value of Sisterhood.”

While hooks was not explicitly referring to sisterhood of sororities, she notes the protection white women have in avoiding these uncomfortable realities. We stray away from discussing the core of these conversations: the sisterhood of sororities are undoubtedly rooted in race,  appearance, status, connections — all the privileges hooks discusses. Women’s personalities are being rated with numbers on a scale. Their social media accounts are investigated and given scores to determine one’s standing. Even on the sister side, top recruiters are considered those who are attractive, or ‘cool’ — but by what standard? It is no secret that there is also a racial divide at Elon that is only amplified by the Greek life system. Just look at the system that “tiers” women, consequently having the most diversity in sororities considered “bottom tier.” Women, both affiliated and unaffiliated, are pitted against each other. It cannot be true sisterhood if it comes at the cost of excluding other women. If we allow the uncritical continuation of this system, how can this promote diverse perspectives? Or equity in general? One cannot advance themselves in the efforts of feminism or diversity, equity and inclusion if the only people we surround ourselves with are only ones that reflect our own interests.

Minorities struggle with power in numbers, and that’s where we need the help — the voices. Ending discrimination of all kinds — race, gender, sexuality, socioeconomic status, disability, religion — means recognizing the historical and current harm it brings to these communities. It means critically examining and dismantling structures, including ones that may be benefiting some of us. Over the years, I’ve realized how important it is to look critically at every system we exist in. Not just the ones in politics, and not just the ones that might blow up on the news. Every system has an impact, and every impact matters. Greek life may not seem on any level in need of desperate reform, but any type of reform can still change someone’s life — someone’s outlook of themselves.

Elon is not Greek life. Elon is a community — of people who meet in class or people who just became so close through a distant line of friends. Elon has proved that we can make communities beyond Greek life, yet when recruitment rolls around, we continue to rely on the system. We need people both in and outside of that system to not just recognize it, but change it; call it out on both the level of individual chapters and nationals. To put the emphasis we do on Greek life dehumanizes people to such limited traits, perceptions, and individual worth. Though Greek life can bring new and existing members a sense of pride for those within that community, each recruitment cycle comes with a cost. Feelings of happiness and comfort does not mean the concept is not actively harming others.

In a study conducted by former Institute for Policy Research graduate research assistant and current Northwestern PhD student, 53 women were interviewed in a series of over 117 interviews over the course of three years. The following issues were consistently discussed:

If you are looking for resources to learn more about the conversation around Greek life, please visit the following websites for more information. There is so much more to learn.