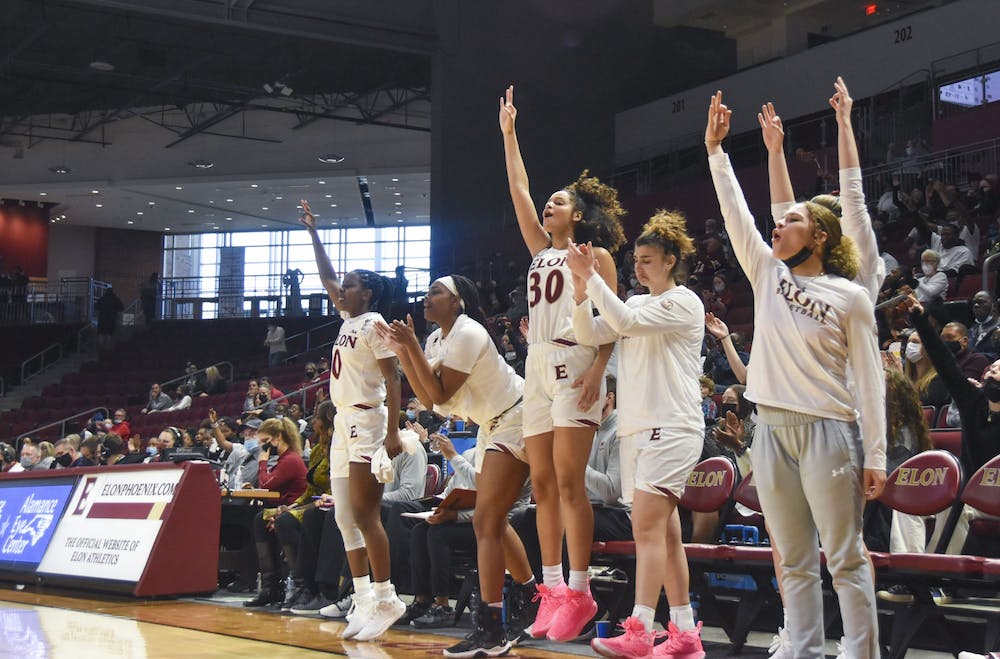 The Elon University women’s basketball team (14-9) celebrated Senior Day on Sunday, Feb. 20, as the Phoenix welcomed the Northeastern University Huskies (12-12) to the Schar Center. After a slow start, the Phoenix exploded on offense in the second half and stifled the Huskies on defense en route to a 78-65 win.

The first half consisted of neither team being able to separate from the other, as Northeastern clung to a 41-39 lead at halftime. The Huskies shot 57% from the field and 71% from three, while the Phoenix shot 44% from the field and 20% from three in the first half. Senior center Evonna McGill, who returned to the team’s lineup last week after an injury, led the Phoenix with 10 points in the first half, as the senior forward dominated the Huskies in the paint.

“Excited to have Evonna back in the rotation,” head coach Charlotte Smith said. “[Evonna McGill] gives us some consistent inside and high percentage scoring in the low paint.”

Senior guard Brie Perpignan and the Phoenix made sure the Huskies did not come any closer, as Elon went on a 10-0 run of its own, to stretch the lead to 16 points. The Phoenix stifled the Huskies offense throughout the second half, and held Northeastern scoreless for over four minutes in the fourth quarter.

Perpignan and senior guard Kayla Liles led Elon in scoring, as both finished with 18 points. Liles also had a team high 10 rebounds. As she secured a double-double (18 points, 10 rebounds) in the 78-65 win.

“We had to do a much better job pressuring them, taking them out of their rhythm, and making them uncomfortable,” Smith said. “We continued to pressure and wear them down.”

Not only was today a big win for the Phoenix, but a day of celebration for the eight seniors who helped build the Elon University women’s basketball program. The seniors honored on Sunday afternoon were Perpignan, Liles, McGill, Peyton Carter, Duru Tasman, Ariana Nance, Kellyn Trowse and Tyja Traore.

“A really special day today with eight seniors,” Smith said. “This is an incredible group of young women, and I am just so grateful for everything that they have poured into this program over the last 4 years.”

The Elon University women’s basketball team will look to build on the momentum gained from this contest as the Phoenix look to pick up another win against a Colonial Athletic Association opponent, the University of North Carolina Wilmington Seahawks. The Phoenix will welcome the Seahawks to the Schar Center on Feb. 23, for a Wednesday night showdown. The Phoenix will look to extend its win streak to five games.