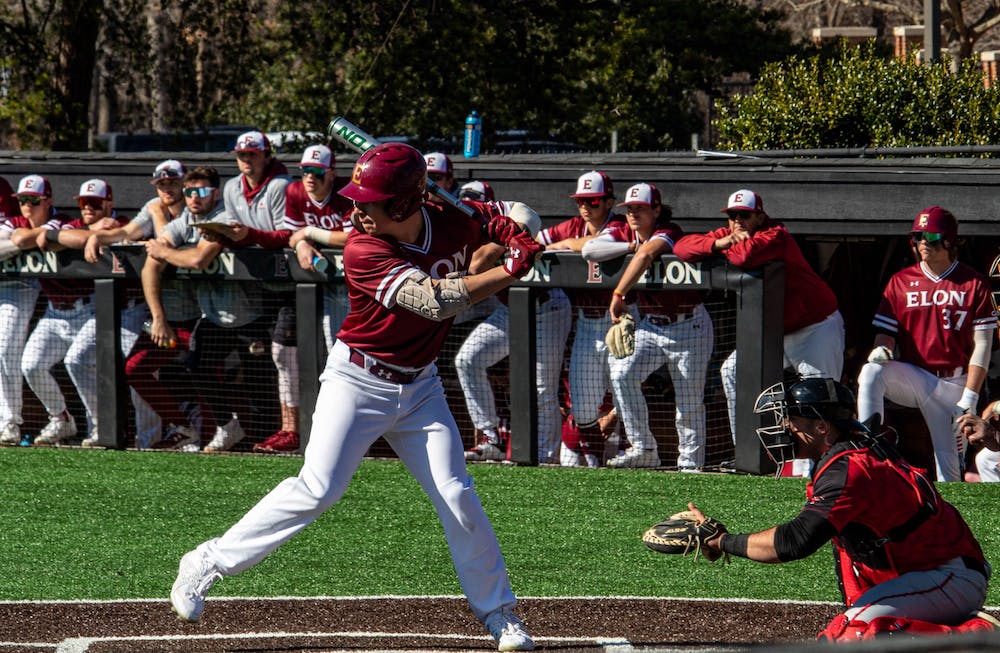 In the Elon University baseball team’s second game this weekend against the Fairfield University Stags, errors were the deciding factor: two errors in the sixth inning led to the go-ahead runs by the Stags, who beat the Phoenix 5-3.

“I saw the changeup down. He was working backwards in the count. I just stepped back with my two strike approach and keyed in on what coach had to say,” Frontino said.

In the top of the third, Fairfield’s Matt Zaffino took advantage of the first baserunner the Stags had, and launched a two run home run to give Fairfield a 2-1 lead. Those were the first two hits allowed by Elon starting pitcher Joe Savino, who up to that point had not allowed a baserunner.

With runners on first and third in the bottom of the third, redshirt sophomore right fielder Alex Iadisernia hit a deep sacrifice fly to left field to tie the score.

Fairfield took its lead back in the top of the sixth, off of two consecutive doubles to score one run. Following this, Elon pulled Savino, who finished with five innings pitched, four hits allowed and three earned runs against.

Elon finished the game with three errors. On Fairfield’s go-ahead double in the top of the sixth, the ball glanced off sophomore third baseman Connor Offshack’s glove and continued down the left field line. With a runner on second, miscommunication on a routine fly ball between left fielder Willie Havens and center fielder Charlie Granatell caused the ball to drop untouched, allowing runners at first and third.

After an intentional walk, the bases were loaded with one out. Stags first baseman Matt Bergevin hit a dribbler up the middle to redshirt sophomore shortstop Connor Coolahan, who flipped the ball to Frontino at second base, but Frontino’s throw to first sailed left and the Stags added on two more runs.

“They're not typical errors … It’s just guys trying to make a play that truth be told they should not be trying to make,” head coach Mike Kennedy said. “Those were plays we feel like we need to make at this level to be successful.”

Frontino said the errors were costly to the outcome of the game but does not expect the problem to linger in future games. .

“There's always things you can do better every single day,” Frontino said “Unfortunately, it's a game of failure.”

The Phoenix appeared primed for a comeback in the bottom of the sixth, with the bases loaded and two outs, but designated hitter Alex Duffey grounded out to second, ending the inning.

The only success Elon would experience offensively from thereon out was a leadoff double by Frontino followed by a run-scoring single from Granatell in the eighth inning.

Frontino finished the day 2-3 at the plate, with a double and a home run.

The Phoenix once again face the Stags on Sunday at noon in the final game of the team’s opening series.