Affirmative action in admissions to be challenged in Supreme Court 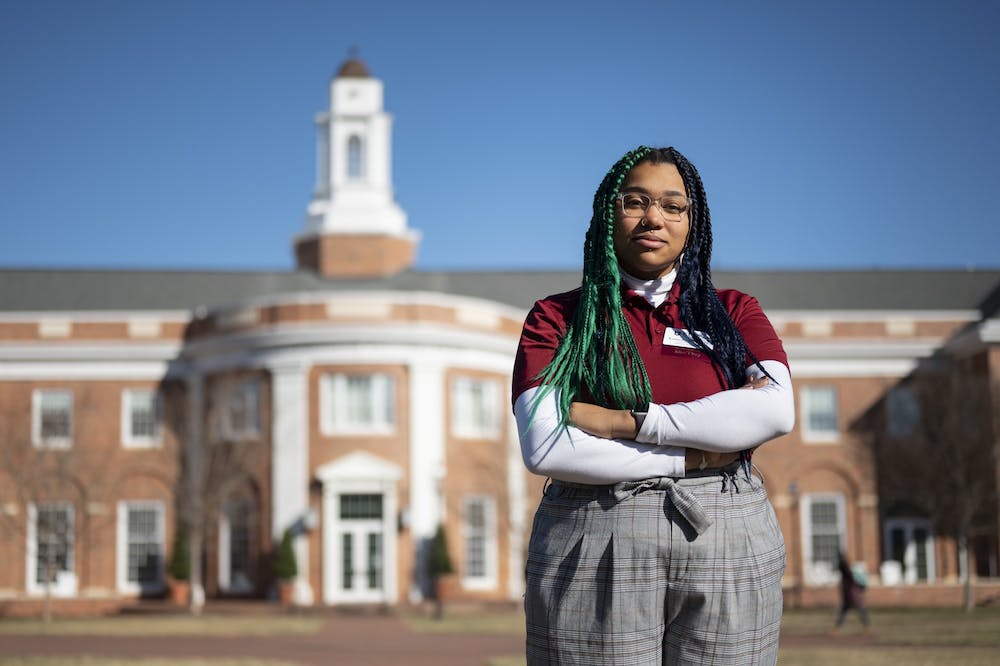 Photo by Luke Johnson | Elon News Network
Elon University junior, Kennedy Boston stands outside of the Inman Admissions building where she works as a tour guide on Feb. 15.

Junior Kennedy Boston knew her race was a big part of her identity when she was applying to colleges. At Elon University and other predominantly white institutions, Boston was acutely aware of how race would appear on her applications.

“I knew that they would look at my application and be like, ‘Oh, she's Black,’” Boston said. “That would be a standout piece of my own application. And inherently, that would change views, or maybe not, but it would at least play some level of consideration in how I was viewed in the admissions process.”

Elon Law professor and alumna Tiffany Atkins, who teaches Race Law to second and third year law students, said past challenges — such as University of California Regents v. Bakke, Grutter v. Bollinger and Fisher v. University of Texas — have resulted in Supreme Court precedents that tell higher education institutions in what capacity they can consider race in admissions.

“We know that you can't just use race to fill a quota. You can't say, ‘We need 20 Black students, go find me any 20,’” Atkins said. “The court said that's inefficient, that's unconstitutional. But the use of race as a factor in admissions and schools, depending on their history — their own history with racial exclusion — can modify that to an extent.”

SFFA filed two similar suits against Harvard College and the University of North Carolina Chapel Hill in 2014. Both cases came up through the court appeals system until 2021, when the Supreme Court agreed to hear them in their next term.

Part of SFFA’s argument relies on the precedent from the 2003 case Grutter v. Bollinger. In Grutter, the court held that the University of Michigan Law School could use race as a soft positive factor in their admissions process — setting the precedent that race-conscious admissions are constitutional when race is just one factor in a process that gives individualized consideration to each applicant.

The two current cases are arguing that the Supreme Court should overturn Grutter and rule that higher education institutions cannot consider an applicant’s race at all in their admissions processes.

Grutter established a “race plus” admissions model; a university can say race is a soft positive, or a “plus,” on an application, but race cannot be the reason the applicant gets in.

Atkins said she thinks when schools acknowledge a lack of representation in themselves, the “race plus” model is the best way to conduct race-conscious admissions.

“If a school knows that it has a history of excluding black students, other students of color, so they prioritize inclusion of those groups, I think that that's fair,” Atkins said. “And the Supreme Court tells us that you can do that.”

But SFFA is arguing that not even a “race plus” model should be used.

The group’s case against Harvard College focuses on a version of a “plus” model that Harvard’s admissions uses. When reviewing applications, Harvard gave positive or negative weight to subjective personality factors. Looking at individual applications, SFFA said Harvard’s admissions officers gave Asian American applicants negative personality factors that offset their academic records. SFFA alleged that doing so allowed them to impose a soft racial quota to limit the amount of Asian Americans they admit. From this, SFFA is arguing that a race blind admissions process would be more fair.

At Elon, race is one of a variety of factors considered in an applicant’s profile, according to Greg Zaiser, vice president of enrollment, and Kimberly Romero, assistant director of admissions for diversity and access. They said the Elon admissions office is intentional with its diversity recruitment efforts.

“Per our university values and the Boldly Elon strategic plan, we seek to build a class of students from different backgrounds, perspectives and areas of the world,” Zaiser and Romero wrote to Elon News Network. “The most important factor in admissions is a demonstrated ability to be successful in the Elon classroom as evidenced by the high school record.”

Boston said she’s not sure how much race is being considered because the population of students of color at Elon is so small.

“There's so few of us here already that I'm like, ‘Is it even playing a role at all?’” Boston said.

To Boston, the “race plus” system is flawed. The system subjectively attaches a numerical value to an identity, she said.

“I think assigning a value to race and its experiences is just not going to work,” Boston said. “To add a value of how much of a ‘plus’ that is, I think, doesn't work because it negates so many experiences based on people's individualized experiences and races.”

What makes one of these cases seemingly unique from previous challenges is that this is the first time the court has considered a challenge to a private institution. Typically, the court does not hear civil rights cases involving private entities, raising two questions. First, whether the Supreme Court has jurisdiction over Harvard, and second, if the precedent set will apply to all private colleges and universities, such as Elon.

The answers go together. The second part of SFFA’s argument is that UNC Chapel Hill and Harvard are violating Title VI of the Civil Rights Act of 1964, which prohibits discrimination in educational institutions. According to Atkins, private institutions that receive any federal funding are subject to the act. Since Harvard receives federal funding, the Supreme Court does have jurisdiction over the school. This means that not only can it be subject to lawsuits, but it is also held to the court’s previous precedents.

Elon, which does receive public funding, is also held to the same standard.

“What the Civil Rights Act of ’64 said is that we're no longer leaving it to the states to decide which rules they follow and which they don't, how they treat people based on race, gender and other identifying demographics or identifying characteristics,” Atkins said.

If the Supreme Court overturns Grutter, it will set a new precedent that race cannot be considered in higher education admissions at all. But Zaiser and Romero don’t believe that any decision in the case will have as great of an impact on Elon as it would on more competitive private institutions like Harvard.

“Much of the attention on Harvard and other schools is a function of their extremely high rate of selectivity. In a sense, selectivity is juxtapose to inclusion,” Zaiser and Romero wrote. “We’re searching for students who will be successful at Elon and our acceptance rate reflects that.”

The last time the Supreme Court heard a race-conscious admissions case was six years ago, in the 2016 case Fisher v. University of Texas. But Atkins said the court didn’t decide to hear these challenges so soon after because they present a unique or different problem from previous cases. Instead, it has to do with the recent changes in the ideological composition of the justices themselves. The sitting justices today may make a different decision from courts of the past.

“The politicking, as we would say here, is that we now have this super conservative court,” Atkins said. “The balance of power has shifted.”

SFFA took advantage of this, appealing to the ideals of a court that now more widely represents its own.

Atkins recalled a 2003 statement from Justice Sandra Day O’Connor after Grutter, where she had said she believed that in 25 years, higher education institutions would no longer need to use affirmative action.

“Twenty-five years from then will be 2028. So we're coming up on this date that Justice O'Connor said we shouldn't need to use this anymore,” Atkins said. “I think she was wrong to put a date on it, because you can't eradicate centuries upon centuries of explicit discrimination against Black people, and other people of color, with just 25 years of race-conscious remedy.”

No matter what happens to race-conscious admissions in the next term of the Supreme Court, Boston said she thinks the system needs an update nationally.

“I truly believe the intentions were good. And what it was initially doing was positive,” Boston said. “But it has morphed into something th\at's a little less positive. … So I think it is another thing that we tried and it didn't work as intended, so we either rework it or get rid of it as a whole.”