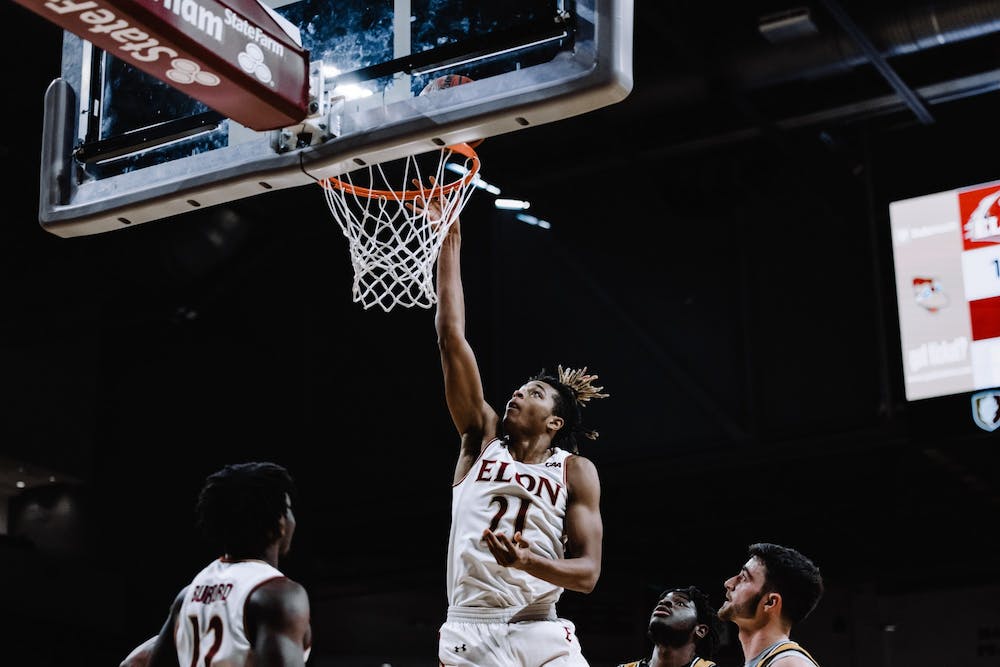 Photo by Lucas Casel | Elon News Network
Sophmore Michael Graham with a layup in the third quarter. The Phoenix would go on to lose 54-59 on Saturday night.

Out of the gate, the Phoenix struggled offensively. The Blue Hens came out in an aggressive half court trap defense and doubled the ball carrier. Elon looked to sophomore center Michael Graham to carry the offensive load and he did, scoring the Phoenix’s first six points.

Delaware forward Dylan Painter saw early success in what would be a monster game for the graduate student, finishing with 23 points and 12 rebounds. His inside presence and passing game froze Elon early, as Delaware jumped out to a 17-8 lead.

However, the Phoenix was not done yet. Coming out of a timeout with 12:42, the team finally found its rhythm offensively. The cold streak on offense was broken when junior guard Zac Ervin hit a corner three in the team’s first possession after the timeout. Sparked by that, Elon fought back to cut Delaware’s lead to two in the ensuing minutes, forcing a Delaware timeout.

The Blue Hens caught fire coming out of their timeout, hitting four consecutive three pointers, including a pair from the university’s all time leader in three point field goals Ryan Allen, to retake the lead. Toward the end of the first half, the three point barrage by the Blue Hens slowed, but they still maintained a 44-32 lead at half.

The game stayed at a double digit lead for most of the second half. For every big play the Phoenix converted, Delaware answered right back with a big play of their own — that is until the final three minutes.

Down double digits late in the game, head coach Mike Schrage opted to use a full court press. The press gave the Phoenix life, and the team was able to muster a comeback leaving the team down five with 30 seconds remaining. However, a forced air ball and two made free throws by the Blue Hens quieted the Phoenix’s comeback attempt and the Phoenix lost 80-77.

The Elon offensive attack was carried by three players, as the admirable performances from Graham, sophomore guard Darius Burford and senior guard Torrence Watson accounted for 57 of the team’s 77 points.

In one of last year's matchups between these two teams, junior guard Hunter McIntosh scored 30 points in 30 minutes. The Blue Hens made sure not to make the same mistake twice, as he was held to a mere seven points on 3/9 shooting.

With the loss, Elon falls to 5-15 overall on the season and remains winless on the road with an 0-9 record away from home.