Premiering at the Robert Studio Theater this Friday at 7:30 p.m., the harrowing journey of two sisters navigating the world together will submerge audiences into one of Jane Austen's classic stories 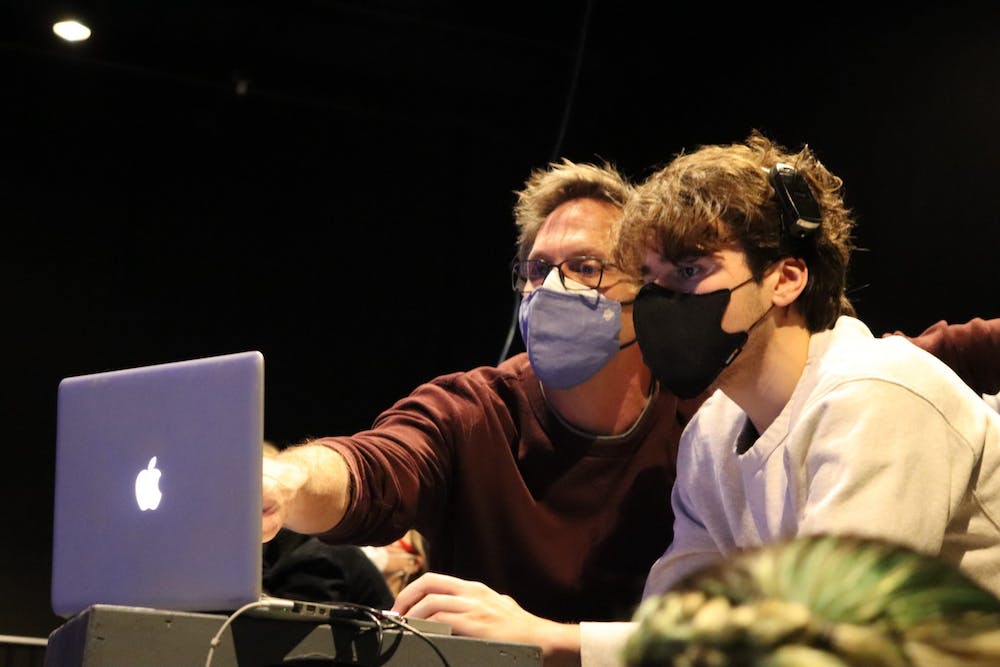 Updated as of Feb. 3, 2022 at 11:30 p.m. to include additional information regarding opening weekend.

Editor's note: The first performances of Sense and Sensibility was canceled due to winter weather. The performances will take place Jan. 22-24 and Feb. 1-4.

Walking into the black box theater, the air is thick with excitement. The stage is marked on the floor, the actors perform their scenes with grace. A table is set in front of the cast with the creative team researching on their laptops. The actors pause from time to time to be given notes about the scenes' historical background, allowing the historical integrity of the play to remain intact.

The Winter play this year is Sense and Sensibility written by Kate Hamil, which is an adaptation of Jane Austen’s book. The play utilizes the Dashwood sisterhood as a way to introduce the ideas of power, love and gender. Sense and Sensibility is set to perform this Friday at 7:30 p.m. at Robert Studio Theater.

Rehearsals started on Jan. 3, which gave  the cast roughly three weeks to prepare for their performance on Jan. 21. Rehearsing from 9 a.m. to 6 p.m. every day.

Senior Hannah Kevitt, one of the Dramaturgs on the creative team, said that the rehearsal has allowed for a collaborative environment to ensue. A dramaturg is in charge of collaborating with the creative team and cast, as well as overseeing audience engagement and researching  the time period that the show is set in.

Kevitt says that a collaborative environment has sprouted up within the rehearsals, allowing for everyone's opinion to be heard.

“That's something that I've really appreciated about the rehearsal process and everyone respecting everyone else's boundaries and needs and feelings,” Kevitt said. “This show can get pretty heavy and sad and there's some low points for some characters, so I think just everyone feeling safe in the room has been such a cool thing to witness.”

Understudy Katie Kapp said that throughout rehearsal, understudies need to be on top of their lines to ensure that if they need to step in, they're ready. Kapp herself had to assume one of the roles she is understudying due to a cast member testing positive for coronavirus.

“It's definitely more of an important role, just because now the chances of going in are so much higher,” Kapp said. “You have to be on top of it. You know, knowing your lines, knowing the blocking, just in case.”

Did you miss Elon Local News? Check out our reporting on Sense and Sensibility below.

The actors have taken multiple precautions according to Junior Jack Morrill, who plays Ms. Dashwood, a gossip and the mother of the two main female characters. This includes getting tested before and wearing KN95 masks during rehearsals. Some actors even have gone to the extent of getting tested multiple times a week throughout rehearsal.

Morrill said he thinks the play will allow for audiences to escape the real world for the duration of the event.

“The show is a nice escape, I think, for audiences,” Morrill said. “There's so much going on right now in the world, COVID aside, that the play that we've created just allows you to escape into a new world, into a different person — for two hours and kind of forget what's going on outside.”

The performances are spread across two weekends. Closer to opening night, the dramaturgy team will release a website that provides audiences with a cheat sheet of irregular phrases used in the play so audiences can better understand and follow along. Tickets are available at www.elonperformingarts.com.