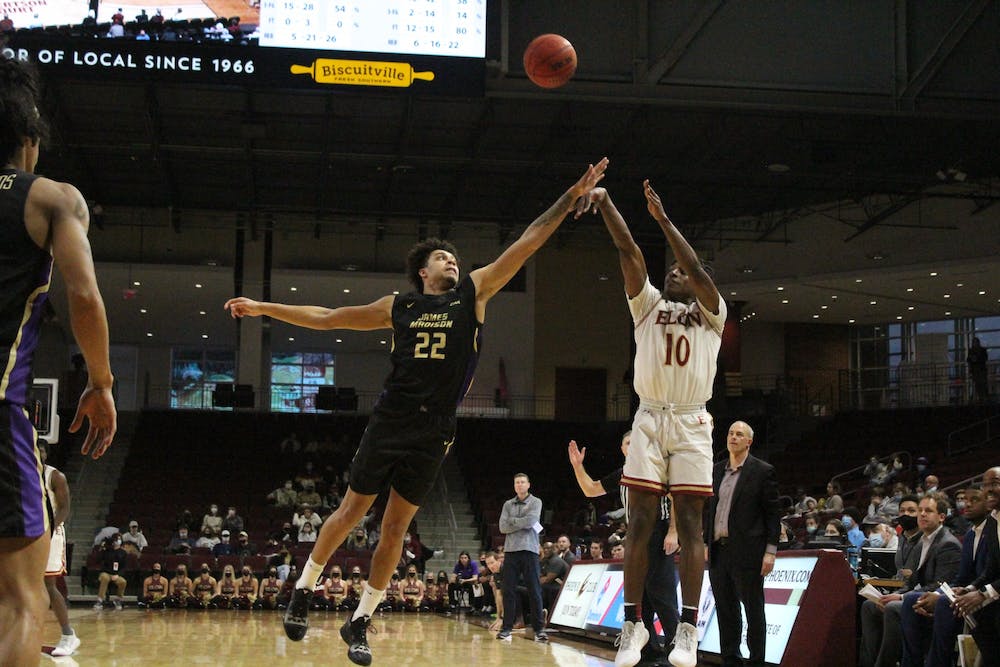 The Elon University men’s basketball team impressed on both offense and defense as the Phoenix defeated the James Madison University Dukes 90-67.

The Phoenix opened up the contest scoring early and often. Three-pointers from sophomore guard Darius Burford and junior guard Hunter McIntosh led the way and allowed Elon to take an early lead.

After a timeout, James Madison returned to action fired up with an early nine point deficit. The Phoenix were stunned momentarily by the fast and ferocious play of the Dukes out of the break, but nevertheless continued to add to their lead. Senior guard Kris Wooten stepped in and continued to add to Elon’s hot start with two deep three-pointers.

Despite their quick pace of play, James Madison struggled to score and find an answer for Elon. An almost five-minute scoring drought for the Dukes allowed the Phoenix to take a double-digit lead in the middle of the first half.

“I was really proud of our guys making steps with our defense,” Head Coach Mike Schrage said. “Holding down a really high-octane offense, but also have the offense clicking too.”

The main story of the game was the impressive three-point shooting of the Phoenix, as the team finished the first half 60% from beyond the arc. Elon kept up its dominance late in the first half, taking a 22-point lead behind the electric deep shooting from McIntosh, Burford and Wooten.

"If we're a more tougher, together team for forty minutes, we can beat anyone."

As the first half came to an end, James Madison went on a 10-0 run. However, the Dukes' reign was ended by a buzzer-beating corner three from McIntosh, giving the Phoenix the momentum and a 15 point lead heading into the locker room, 46-31.

After a slow start out of the half, a three from Burford kickstarted the Phoenix offense. The defense also shined, highlighted by a block against the glass by sophomore forward Michael Graham.

The second half saw the Dukes and Phoenix trade blows back and forth until a tough-earned “and-one” bucket from senior guard Torrence Watson put the fans in Schar Center on their feet, and the Phoenix never looked back.

“It feels great to have the fans,” Burford said. “It’s a totally different game when we’re home.”

Frustration overtook the Dukes when freshman guard Terrell Strickland received back-to-back technicals and was ejected from the contest with 7:41 remaining.

JMU attempted to recover, but splash plays continued to come from Elon. Graham executed a highlight “Graham Slam” and Wooten hit another three, adding to a career-night for the senior team captain.

Schrage said the keys to Elon’s 23-point victory were toughness and execution.

“Guys made the right play over and over again,” Schrage said. “That’s what we got to be, we’re better together and today was a great step in that direction”

Elon was led by Wooten, who finished with a career-high 23 points. McIntosh added 18 points and led the team with 7 assists. Burford led in rebounds with eight in a team-high of 33 minutes, and added 16 points.

“It’s all to my teammates, they got me some good open looks,” Wooten said. “I appreciate these guys, they play hard, I just go out there and try to do the best I can.”

The Phoenix will return to action on Thursday, Jan. 20th, to face off against the Drexel University Dragons as the first of a two-game road stand. The game is scheduled to begin at 7 p.m on FloSports.

Burford said the team will need to replicate this performance in its upcoming road trip to come away with a pair of victories.

“It sets the blueprint,” Burford said. “If we’re a more tougher, together team for forty minutes, we can beat anyone.”