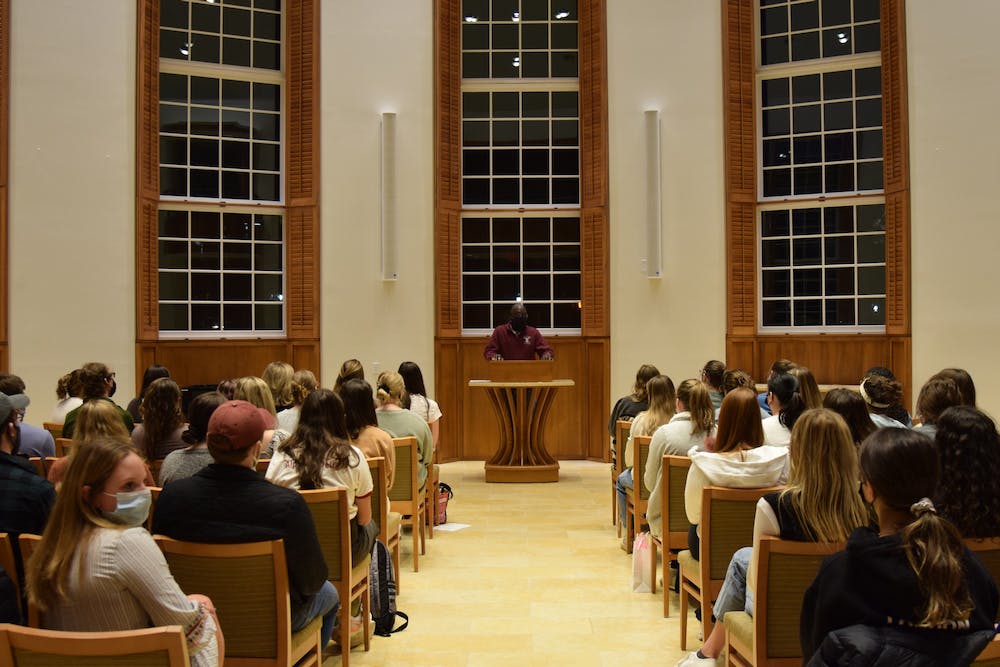 Photo by Ryan Kupperman | Elon News Network
Coordinator of Undergraduate Human Anatomy Laboratory Matthew Clark speaks at the Human Anatomy Donor Memorial on Thursday, Dec. 2. Clark founded the anatomy curriculum that uses human donors, and he ensures that a memorial service is held at the end of each semester to give students and professors an opportunity to respect the donors and reflect on the opportunities provided by them.

Updated as of Dec. 5, 2:18 p.m. to include information from the Anatomical Gift Program about the program and memorial service.

Anatomical donors of Elon's Anatomical Gift Program, referred to as silent teachers, provide a resource for students and professors in undergraduate biology, as well as Elon’s School of Health Sciences. Through the Human Anatomy Lab, students and professors get the opportunity to learn from these anatomical donors who have dedicated their bodies to science and education, after death.

Senior Alessia Mercuri, who served as foreman or planner of the service, said the term silent teacher was introduced to the students at the beginning of the fall semester as a way to further dignify those who choose to donate to the program.

“Sometimes we forget that these silent teachers are individuals,” Mercuri said. “We need to pay our respects to them.”

As an anatomist in the East Carolina School of Medicine in the ‘90s, Matthew Clark said that learning anatomy through dissecting and examining human bodies is a critical part in the education process.

Clark said that hosting memorial services for the people whose bodies were donated was very important to him. Clark now serves as the Coordinator of the Undergraduate Human Anatomy Laboratory and made sure to carry that sentiment with him when he founded the curriculum.

Since coming to work at Elon and starting the human anatomy curriculum in 1999, Clark said he made sure that the memorial services were present from the beginning and remained an important part of concluding the course.

“It's an honor — their bodies are gifts — to respect the gift that was given to you and to honor that gift that was given to you, and that's why the memorial service is so necessary,” Clark said. “You leave the service with this perspective, like wow, I just worked with someone in the human anatomy lab that actually lived in this community — that donated themselves for me to learn from them.”

As a way to make the thank you more impactful, the memorial services are entirely student run. Mercuri, who planned the event with senior student lab manager Gabrielle Clancy, was in charge of reaching out to members of the program who worked with the silent teachers to speak at the service. In addition to that, Clancy went over each anatomical donor’s cause of death, and the two held a moment of silence, as well.

Mercuri, who got involved in the fall of her sophomore year when she first took anatomy as a class, said she was very proud of the turnout this semester. While she anticipated roughly 40 people at the most, she estimates at least 60 were present — a turnout she had never seen before.

“No one can donate another person,” Person said. “We felt really strongly, morally and ethically, that the only person to make the decision to donate his or her body, is the individual themselves.”

According to Clark, before he came to Elon, there was one anatomical board in North Carolina that was responsible for providing donors to the entire state; the board also only provided these donors to medical schools. Since Elon is not a medical school, Clark said that the university had to go out of their way to receive donors from anatomical boards located in South Carolina and Virginia.

As of December 2021, the undergraduate anatomy program has received a total of four for the 2021-22 school year, according to Clark. On average, he said they typically receive five donors a year from the Anatomical Gift Program.

To further remind students that their silent teachers had a life prior to serving in a teaching capacity after death, personal information about each anatomical donor is shared at the service, Person said.

Clark also said the need to acknowledge and respect the gift that a donor provides is essential, along with being able to reconnect with one’s humanity after having those lab experiences.