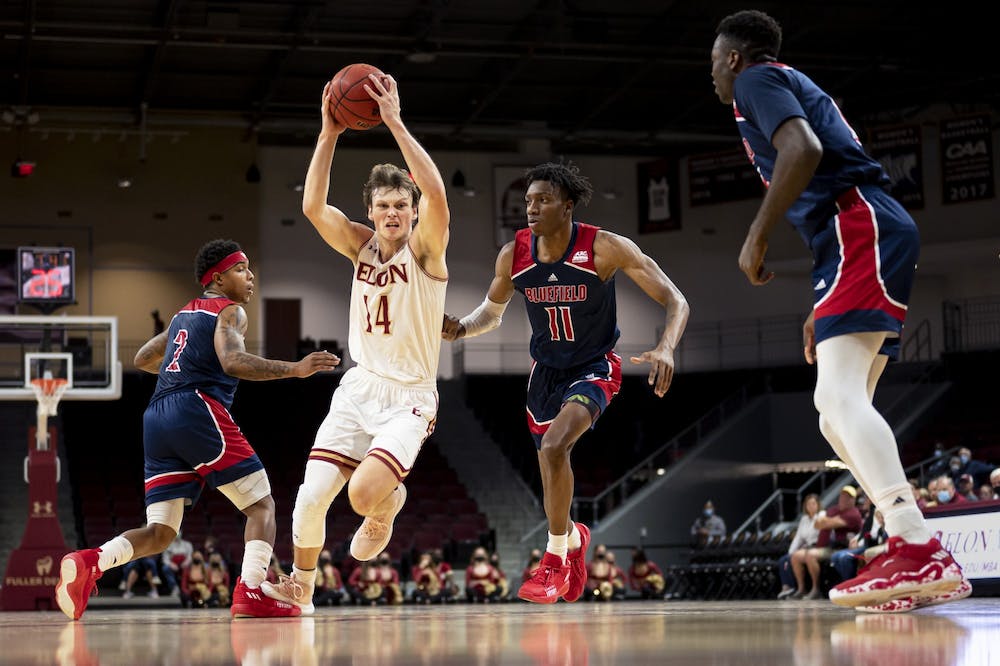 Photo by Luke Johnson | Elon News Network
Elon University junior Zac Ervin drives the ball down court during a game against Bluefield College in Schar Center on Nov. 14. In their third game of the year, the Phoenix secure an 89-72 victory. by Luke Johnson

After missing the entire 2020-21 season due to a torn ACL, junior guard Zac Ervin has returned to Elon University’s men’s basketball team.

In the spring, while the team had a historic season, Ervin was on the sidelines, going to rehab and working on some of his skills.

“Obviously, last season, I missed the whole thing and the spring. It was just a lot of making sure that I was ready to go. I was still rehabbing quite a bit,” Ervin said. “I was doing workouts, but it wasn't like 100% until the summer that officially got cleared.”

Ervin said he has to work more than he is used to as he gets ready this season, but he is healed and able to play again.

“I still have to do a little bit of extra stretching or I have to get loose, maybe a little bit more than I used to, but other than that, I'm ready to go,” Ervin said.

Ervin started 15 of the team’s 34 games during his freshman season. He averaged 8.4 points for every 21.8 minutes a game — totaling 202 points for the season.  He also made 46 three-point shots, shooting almost 37% from distance.

This year, he is looking to be just as successful shooting from the three-point range.

“That’s one of my biggest roles on the team,” Ervin said. “I practice it all the time, whether it's getting back in the gym again, that's extra shots. I just try to have a short memory and just let it fly.”

Head coach Mike Schrage said he is just as hopeful that Ervin’s shooting can help the team’s offense as the season develops.

"Everyone's going to be aware of Zac Ervin on the court. And certainly we’ve got to make sure we're getting him shots, at the appropriate times,” Schrage said. “And if he's hot, keep 'em hot, because he's the kind of guy who can hit six, seven, eight threes in a game.”

According to Schrage, since his injury, Ervin has worked on becoming more of an all-around player rather than just being a talented three-point shooter.

“He's become a really complete player,” Schrage said. “He always has been, but he did so much skill work last year, even as he was taking a step by step with his passing, with his handling to see his progression there has been really impressive.”

Ervin said that after his injury last year, his teammates and his coaching staff supported him throughout the process.

“They were the best — my teammates — especially when I was out and I couldn't really walk around and stuff. I mean, they would do anything for me, and the coaching staff was the same way,” Ervin said. “They were really, really supportive of me and checking in on me, my mental health, all of that.”

This year, Ervin said he is happy to be an extra asset to the team.

“I'm ready to do whatever the team needs me, and whether that's knocking down shots, or if I'm not hitting, defending well being in the right spots or, making my teammates better,” Ervin said. “Just being out there, having an extra body, an extra person just provides more depth, and I'm excited.”