The total sticker price will be $56,127, according to Elon’s website listing tuition and fees 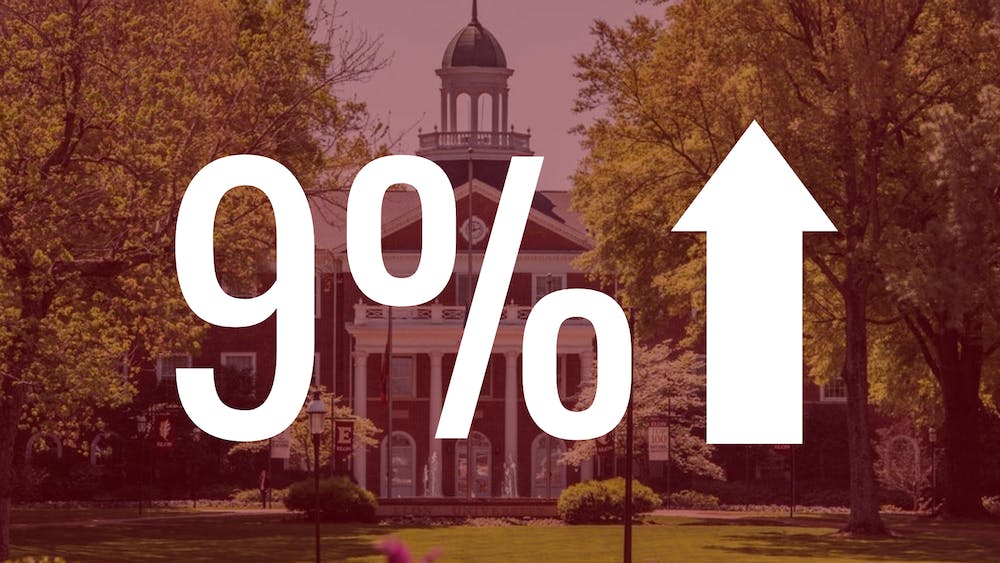 
The overall tuition price will increase by over 9% for the 2022-23 school year. The total sticker price of $56,127, according to Elon’s Undergraduate Admissions.

According to sophomore Sydni Brown, her annual household income is less than the tuition that she and her family have to pay each year. Brown’s mother, Frenchie Sidney, is a single parent with two children — Brown and her brother. Brown and Sidney said that they both do whatever they can in order to pay tuition.

“I have to be able to help my family because we don't have as much money coming in as other students, so it's very stressful for me to have to take on more shifts and do more things to be able to get these monthly payments,” Brown said. “On top of all the schoolwork that I already have to deal with and then just being a college student in general.”

Sidney also said that in addition to her annual income, the pair relies a lot on scholarships, grants and loans — as well as whatever kind of support extended family members can provide.

“It just makes me worried that I'm not going to be able to afford for her to be able to go to the place where she really wants to be, and I know that it makes her worried as well,” Sidney said. “I just feel like Elon should think about the students and their financial situations a little bit more than they do.”

Increased tuition prices may also have an effect on potential Elon students, according to Brown.

“Increasing the tuition is in turn going to cause a bunch of people who are considering coming to Elon to not be able to do it anymore, because they can't afford it,” Brown said. “And a lot of people who already go here, I imagine, are going to have to consider transferring schools and going to different places with lower costs.”

Patrick Murphy, Director of Financial Aid, said that next year’s amount of financial aid available will be affected by the increase in tuition, and any additional funding will support part of the projected change in cost for students who receive need-based aid.

Financial aid applications for new students will be reviewed starting in January, according to Murphy. And for returning students, the financial aid office has not yet begun assessing students for aid for the 2022-23 academic year.

“As in previous years, returning students’ aid applications will be reviewed in the spring semester. The 2022 FAFSA is based on two year old tax information and will be using 2020 income data,” Murphy said. “The 2020 quarantine may have affected incomes across the nation and subsequently the FAFSA.”

Murphy said that the official notice of next year’s cost will be communicated as scheduled to students and families by the president’s office early in 2022.

Because of this, Brown said that tuition prices may have an effect on the community’s diversity.

“Elon talks about diversity and inclusion so much, and that doesn't just mean diversity and race — I feel like that's the first thing that everybody thinks of,” Brown said. “But Elon is a place where only people of a certain socioeconomic status can really afford to go there without having to worry about it. A lot of people are just simply not going to be able to afford it.”

According to Owen Covington, Assistant Vice President for News and Information, the Board of Trustees and the university budget committee created the budget for the upcoming fiscal year, including the increase in tuition, fees, room and board, based on a number of factors.

"This fall, the Board of Trustees and the university’s budget committee worked hard to create a budget for next fiscal year that maintains Elon’s position as a “best value” university, while addressing significant resource demands due to the pandemic, rising costs and new investments in programs, personnel and facilities," Covington wrote in a statement to Elon News Network.

“Colleges and universities report annual tuition changes at various times, making it challenging at this point to comprehensively compare Elon’s tuition change for the 2022-23 academic year to those approved by its peers,” Covington said. “It is worthwhile noting that Elon’s annual cost increases during the past six years were in the range of 3 to 3.7 percent, which was below the increases at many peer institutions.”

Many administrators did not respond to Elon News Network’s immediate requests for comment, or were unavailable during the Thanksgiving Break to comment. Others referred Elon News Network to Elon University Communications.

Jenna Manderioli contributed to the reporting of this story.