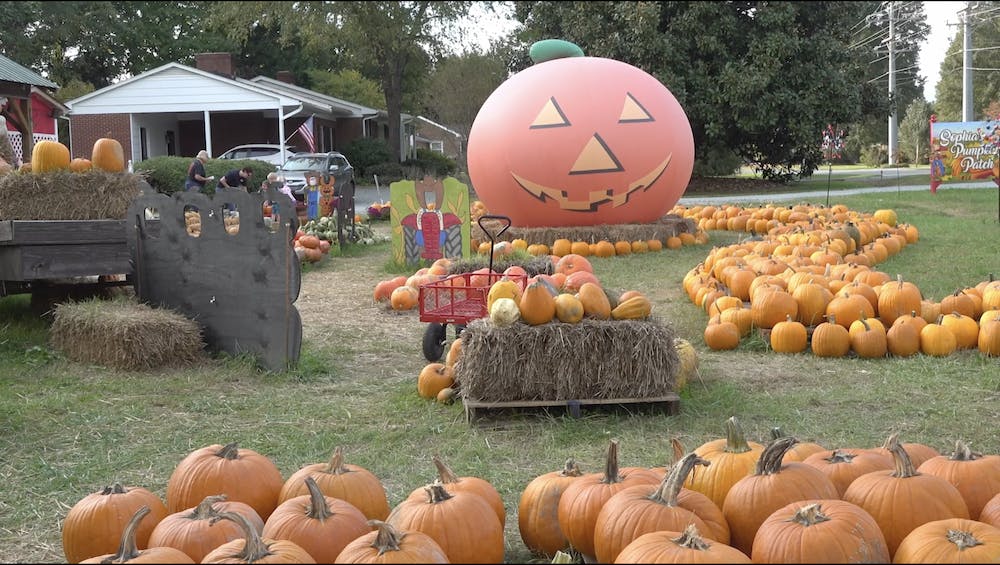 
Sophia's Pumpkin Patch in Burlington is just one spot of many to buy the seasonal fruit in Alamance County.

Over 25,000 pumpkins were harvested for the fall season at Sophia’s Pumpkin Patch, a family-run business just eight minutes from Elon University’s campus in Burlington.

It opened last fall during the peak of the pandemic, and owner Alex Fogleman said he never expected the success the patch has seen so far.

“It’s one of the things that if I would’ve known it would go over this well, I would’ve been doing it a long time ago,” Fogleman said.

Sophia’s Pumpkin Patch opened for the season on September 15, and has already sold over 15,000 pumpkins to customers, churches and schools in Alamance County.

Fogleman said he does it all for his 18-month-old daughter. After she was born in April 2020, Fogleman started the business in October that same year, and the profits from pumpkin sales will go toward her future education fund.

“It kinda gives us a better sense of pride being out here doing this when it's actually coming from our farm and ya know the family is helping out and everybody is kind of contributing their little piece into everything,” Fogleman said.

The family business owns its retail spot in Burlington and a farm spanning over 100 acres in Liberty, North Carolina where they harvest the pumpkins. Their farm in Liberty is the Foglemans’s fourth-generation farm

The family’s goal is to be able to get started on saving money for Sophia’s future now and “not have to worry about it later on.”

Fogleman said sometimes running the business is not always as fun as it looks. This pumpkin-harvesting season has been a challenge in some ways.

“We started growing our pumpkins this year which kind of threw a curveball into everything because any farm is at the mercy of mother nature,” Fogleman explained.

He said he hopes that in the future, the family can open their farm up year-round for farm tours, hayrides and corn mazes to bring back agritourism in Alamance County.

“Folks here are having to travel to Gilford County, Wake County or Durham County to get that same experience,” Fogleman said.