After losing the first set, the Phoenix won three straight sets to defeat the Towson Tigers 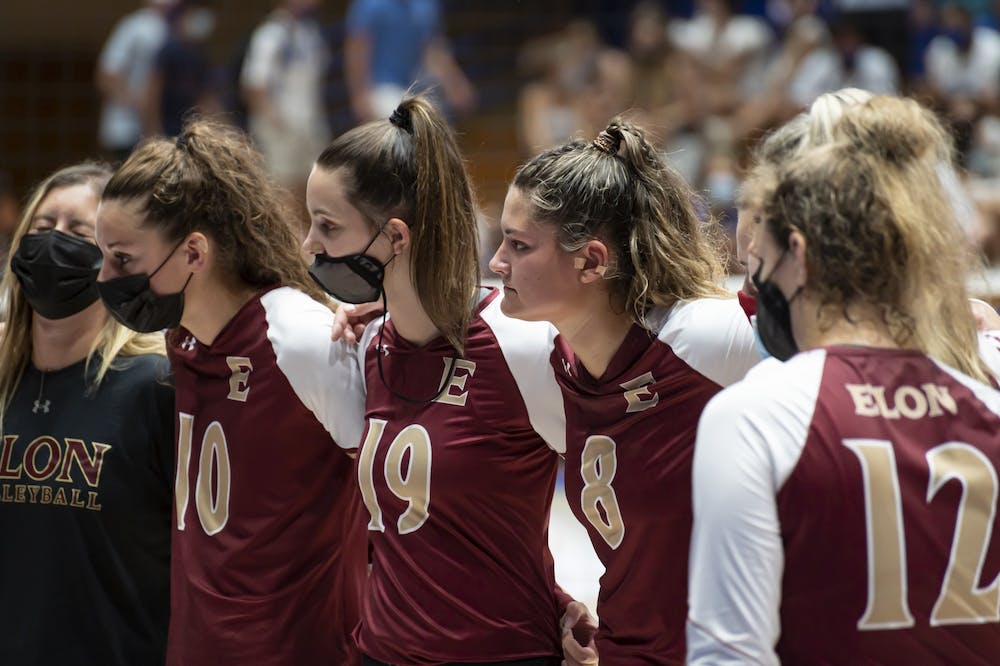 Elon University's women's volleyball team huddles up to listen to coach Mary Tendler as they are defeated by Duke University at the Cameron Indoor Stadium in Durham, NC on August 31, 2021. by Luke Johnson

Elon University’s volleyball team defeated the Towson University Tigers in four sets on Oct. 2. After a tough first set, the Phoenix rallied to sweep the Tigers in the next three sets.

The first set proved to be the most challenging in the match for Elon, as the team quickly fell behind, 7-2.

The Phoenix never held a lead in the set and went on to lose it, 25-18. The team registered just seven kills in the set, compared to Towson’s 16.

Neither team held an advantage in the beginning of the second set. However, the Phoenix were the first team to build a significant lead, 12-8, which helped them roll to a 25-16 set win.

The Phoenix continued its momentum in the third set, winning 12 of the final 15 points to take the set 25-17.

Despite trailing initially in the fourth set, the Phoenix took the lead midway through and held on to win it, 25-23, to close out a victory.

Seniors Natalie Cummins and Leah Daniel tied for the lead in kills for the Phoenix with 12 along with freshman Sydney Love. The trio combined for 36 of the team’s 45 kills.

With the win, the Phoenix improved to 5-0 in the Colonial Athletic Association and is now two games clear of Towson in the standings. The two teams will meet again on Sunday, Oct. 3. The match will begin at 2 p.m.