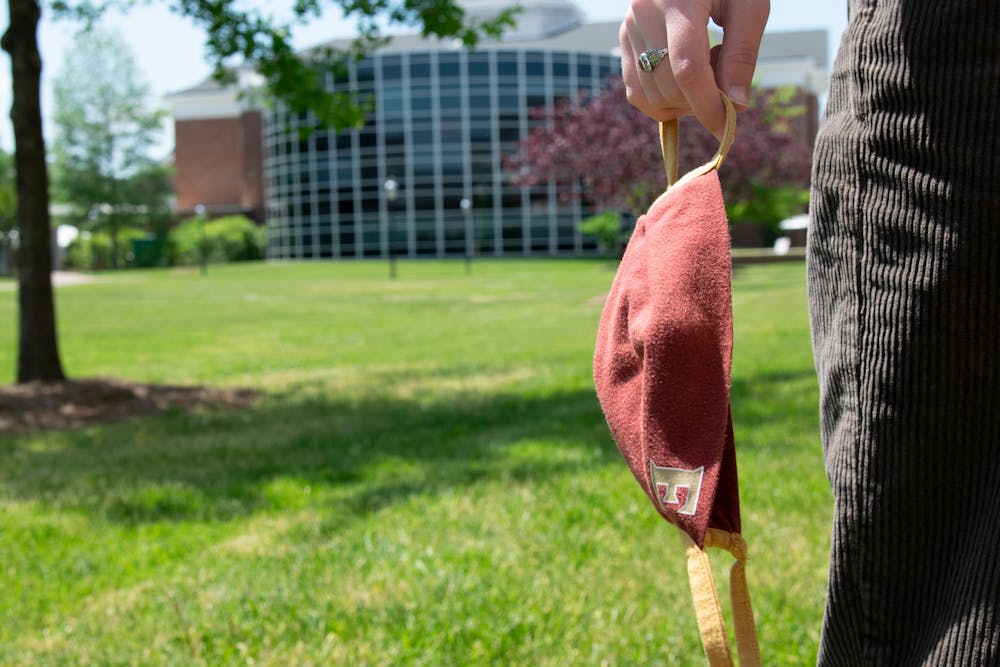 
According to the Healthy Elon update from Vice President of Student Life Jon Dooley, the cases in this cluster represent all but one of the new positive cases among students last week.

Elon University identified a COVID-19 cluster of 15 positive cases among members of an on-campus group. The cluster, identified in the Alpha Kappa Psi co-ed business fraternity, was verified over the past week.

The cluster comes from the 43 students who participated in an off-campus trip over the weekend on Oct. 1 to 3. According to the Healthy Elon update on Oct. 11 from Vice President of Student Life Jon Dooley, the trip was unregistered by the university. Cases in this cluster represent all but one of the new positive cases among students last week.

However, according to president of AKPsi and senior Adam Dubowy, the trip was not affiliated or promoted by the business fraternity, nor was there any Student Government Association funding involved. A member of the SGA Finance Board disclosed to Elon News Network that no student activity funding through SGA was used for the trip.

“It was a group of friends that decided to go away for the weekend,” Dubowy said. “I personally didn’t really see any difference between this trip and maybe a situation where 20 friends decided to go out for dinner and maybe contracted COVID from the restaurant.”

AKPsi’s advisor, Lecturer in Management at Elon Patrick Bell, said it was not an organization sponsored event. He said he didn’t even know about the event “because there was no reason for me to.”

“No money was spent from AKPsi or SGA funds, nothing,” Bell said. “It was a group of friends. I'll be it a large one, but a group of friends with shared interest gathering out of state to have fun with absolutely no connection to official Alpha Kappa Psi.”

Dubowy said the organization has been in contact with the university officials about the number of positive cases, but he was disappointed with how the Healthy Elon update informed the school about the cluster.

“Calling this an unregistered trip — it hurt a little bit because we have been communicating with the school and ensuring them that this wasn’t an AKPsi event,” Dubowy said. “It wasn’t planned, paid for, sponsored by the organization.”

Bell said he had been communicating to the university since last Friday that the trip was not affiliated with AKPsi and that he was also disappointed to see the university-wide email earlier this morning.

“Adam and the executive board and the Alpha Kappa Psi members are...frightened. Talk about sanctions they’re frightened about, they’re upset about their name being dragged through the mud like they did something that was really irresponsible in a time where we’re all trying to remain healthy,” Bell said. “I mean, these are serious accusations and the accusations are not true.”

Dubowy also said the organization feels like they’re “being thrown under the bus without a chance to respond or explain.”

“We’ve been trying to explain this and it feels like we are not being believed and everything that we are presenting to the administration, they’re not necessarily believing us,” Dubowy said.

At the beginning of the school year, student travel and competition guidelines were provided to all student organizations and other campus groups that may travel or compete earlier in the term. This includes organization-related travel, retreats, club sports competitions and departmental and academically related travel.

In an email to Elon News Network, Dean of Student Life Jana Lynn Patterson wrote that over 1000 students in the past few weeks have been tested for pre-travel and competition.

“By following the testing protocols we have been able to identify positive cases shortly before student groups depart from campus or engage in competitions,” Patterson wrote. “This reduces the risk of positive cases travelling and exposing other members of a group, which may lead to development of a cluster.”

Those with positive results are in isolation and others who tested negative have been advised to follow CDC guidance for masking and watch for any symptoms. The university has also conducted contact tracing to inform those in the community they were in close contact with a positive case and inform them of available resources and next steps.

According to Patterson, there currently are no other emerging clusters on campus.

“The University COVID-19 data team monitors cases and if a pattern emerges, we look for plausible epidemiological linkages,” Patterson wrote. “Outside of this reported event our positive cases have been low over the past 14 days with no known emergent clusters. Of course this can change at any moment, and if we see something that begins to emerge as a potential cluster, we will initiate strategies to reduce the risk of transmission.”