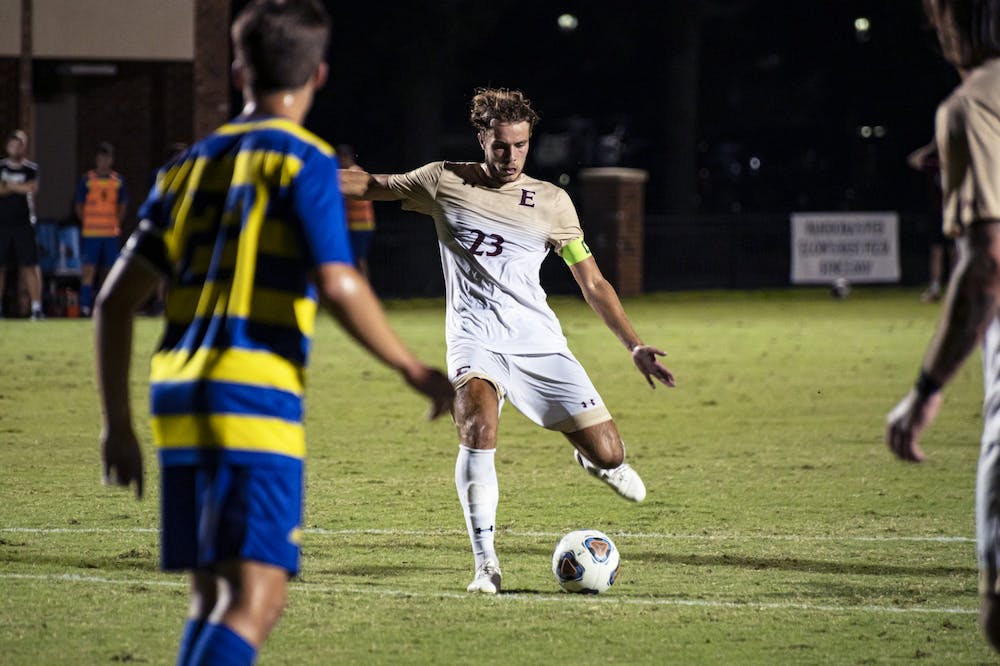 
Elon University junior midfielder, Jeppe Jordoson scores the lone goal in the Phoenix's match against the University of Delaware at Rudd Field on Sept. 11, 2021.

“It’s not an individual thing, because my wife, my kids, my family allow me to be in college soccer,” Reeves said. “I have to thank my assistant coaches, I’ve had some incredible assistants over the years.”

The match was tightly contested, with Elon managing to outshoot Delaware 9 to 8, and 4 shots on target compared to Delaware’s 3.

The game got off to a cagey start, as both teams created chances to open the scoring with counter attacks. As the game wore on, the Phoenix began to take control, but reached halftime with the score tied.

“We started off a little bit shaky the first 10 to 15 minutes,” Jordoson said. “They were putting a lot of long balls forward and got some chances, some scrappy chances, but I think after those 15 to 20 minutes we got settled in and created some real chances.”

Jordoson’s goal came from a set piece early in the second half. Elon won a free kick on the edge of the Delaware box, which senior midfielder Christian Lauenborg took. Rather than shooting himself, Lauenborg rolled it to Jordoson, who buried it in the top left corner of the net.

“Normally I do practice my free kicks,” Jordoson said. “But since I hit the one last week, I haven’t practiced it. As long as it works and I keep scoring in games, I’ll guess I’ll just stay away from taking free kicks at practice.”

Despite his moment of individual brilliance in scoring the goal, Jordoson said the effort from the team’s defenders was the decisive element of the match.

“I think I would go with Vemund Hole Vik for man of the match,” Jordoson said, “I think he wins a lot of duels in there, and is just so calm on the ball, and no one gets past him in one v. one defending, which we needed a lot today.”

Reeves applauded the team’s grit and composure against a stout opponent.

“It was just a well-rounded, group effort,” said Reeves. “We relied on players off the bench, had some adversity with injuries, and just battled really hard in what was a typical CAA game against a very well coached and strong Delaware team.”

Other standout performers for the Phoenix included sophomore defender Jannik Videbaek, who played the entire game at defense, and sophomore forward Victor Stromsten, who fired two shots on goal in just 30 minutes of action.

Elon men’s soccer will be back in action at High Point University on Wednesday, Sept. 15, with kick off set for 7:00 P.M., before traveling to play College of Charleston over the weekend.