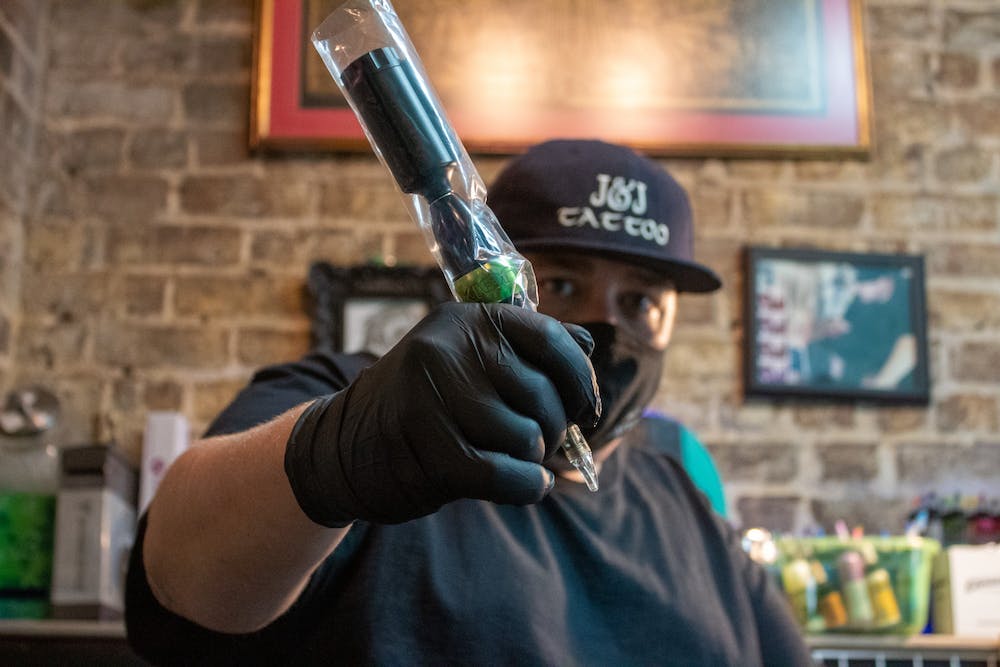 Photo by Laney Daniels | Elon News Network
Owner of J&J Tattoo Joshua Hall prepares his tattoo pen before an appointment. The tattoo shop has been open for 24 years, and Hall hopes to expand his business in other locations in the future.

Joshua Hall was selling his art to his friend’s dad before he realized where his career was headed. His friend’s dad was a tattoo artist, which soon influenced his future path. Now, Hall’s tattoo studio in Gibsonville has clientele across the East Coast.

Hall’s journey as an artist began in a small part of Burlington, NC. Drawing inspiration from his older brother, Hall was fascinated by the ability to bring pictures to life through color and blending, and he wanted to learn this skill for himself.

Open for 24 years now, Hall owns J&J Tattoo in Gibsonville, named after himself and his wife Jessica, one of his first apprentices. Hall said his favorite part about the tattoo business is developing personal connections with clients. He has worked with clients who have struggled with mental illnesses, beat cancer and those who wanted scars covered in the past.

“Sitting down and actually being able to help people is my favorite part about this job,” Hall said. “Being able to cover up scars…there are so many things you might not think about that I can do to help people mentally. I’m a bit of a therapist for my clients because they can come in and tell me anything so that when they walk out of here, they’re walking out a new person.”

Hall said he knew he wanted to be an artist full time when he finished his apprenticeship. As he finished learning alongside his friend’s dad, he began traveling for a construction company that took him along the East Coast.

“I built a huge clientele in Savannah, Georgia, and I had a decent sized clientele in New York as well, but when the travel became too much I ended up in Gibsonville,” Hall said.

Hall is currently training two apprentices and said he hopes to expand to more locations in the coming years. One of his apprentices, Lynn Overman, said the family atmosphere of the studio is something she appreciates.

“Working with Josh has really opened my eyes to the possibilities of tattooing,” Overman said. “Whether it is about tattooing or life, he is a great role model and mentor. I think of him as my tattoo dad along with his amazing wife Jessica as my tattoo mom.”

Kris Freeman, Hall’s newest apprentice, said the studio is a place to learn and grow professionally.

“He truly wants us to have a full understanding of what it is to be a tattoo artist which includes lots of drawing and practice,” Freeman said.

Hall said he is confident that his support system will help him make his dreams of expanding J&J a reality.

“I’m planning on renting the upstairs apartment here to expand that way and we’ve been looking for a couple other locations so we can open up some more J&J’s,” Hall said. “I’d like to have a couple more shops so that everyone who comes in and learns from me can be placed in those locations and I plan to let it snowball from there.”