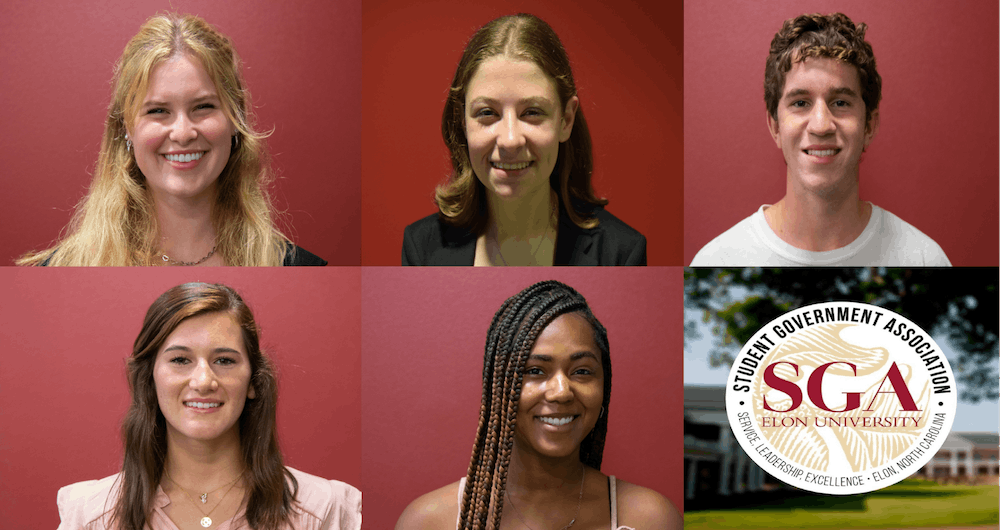 Photo by Kyra O'Connor | Elon News Network
Elon University’s Student Government Association announced results of the class of 2025 elections on Tuesday night, Sept. 14, in downstairs Moseley. A total of 552 ballots were cast during the election period.

Elon University’s Student Government Association announced results of the class of 2025 elections on Tuesday night, Sept. 14, in downstairs Moseley. A total of 552 ballots were cast during the election period.

Freshman Alexa Morrissey was elected as the class of 2025 president. She won the position with 38.6% of the vote. Morrissey ran against Nick Cideciyan, Ryan Elad and Ja’Mya McKoy for the position.

Morrissey, who is also a member of Elon News Network, said one of her favorite memories of campaigning during elections was seeing the amount of support she received from her peers.

“I’ve only been here three weeks and already just a lot of people have really just shown me a huge amount of support, which is so humbling and an amazing experience in general,” Morrissey said.

Morrissey used social media to promote her platform, including making an Instagram and creating a music video with other students on the floor of her residence hall.

Serving in her new position as class of 2025 president, Morrissey said one of the key issues she hoped to address was the lack of diversity on campus and working to make campus a more welcoming and inclusive space for all individuals.

“I think here at Elon we definitely lack a sense of diversity here," Morrissey said. "It’s my goal to really just work with the CREDE [center] a lot and try and improve some of those statistics at Elon.”

Freshman Charlotte McCormick was elected to the position of class of 2025 vice president. McMormick won the position with 36.44% of the vote. Alongside McCormick, Joserth Salas Chaves and Jack Sheppard also ran for the position.

When her name was announced during the election results, McCormick said she felt excited to serve her class and connect with other members of SGA.

“I’m just excited to get working with other members in SGA and to really serve the freshman class,” McCormick said. “It’s definitely a really exciting opportunity and I cannot wait to start.”

McCormick said she felt nervous toward the beginning of her campaign, but quickly gained confidence through talking with students in her class and network with others on campus. She also said that she hopes to push forth conversations of intellectual diversity on campus.

“I ran with a mission of emphasizing intellectual diversity and making sure everyone’s opinions are heard and that we are fostering a very respectful environment where everyone feels comfortable sharing their viewpoints,” McCormick said.

Three members of the class of 2025 were elected to serve as senators in SGA. Freshmen Alexis Cooper, Bo Dalrymple and Robin Falkow ran uncontested for the three positions.

Dalrymple said he utilized social media heavily during his campaign and also connected with different freshmen on campus through student organizations, clubs and group chats. He mentioned that Canva, a graphic design platform used to create social media graphics, presentations, and posters, allowed him to present his platform to the student body in a unique way.

Falkow said while the initial campaign process felt long, she is glad she went through with it and is looking forward to being a voice for the class of 2025.

“I’m really excited to hopefully be the voice for my class and then getting everyone’s opinions and hopefully being there for other people,” Falkow said.

Falkow said the signage of parking places remains a huge issue on campus, and hopes to address the issue through future legislation.

Cooper said she was surprised by the announcement of the SGA election results, but is ready to share her ideas with the freshman class.

During her campaign, Cooper said the African Diaspora LLC was supportive of her decision to run for the position of class senator and was helpful in spreading her platform to other students through social media.

Cooper said she ultimately hopes to make campus a welcoming space for all students and to help them feel they belong within the Elon community.

Both the secretary and treasurer positions for the freshman class ran uncontested.

According to Dean of Students Jana Lynn Patterson, the positions will be appointed by members of SGA. Members of SGA also said they would reach out to previous candidates who ran but were not elected to fill the vacant positions. They hope to have both candidate positions filled in the near future.

Class of 2025 representatives will be sworn into their new position at the next SGA business meeting on Sept. 16.