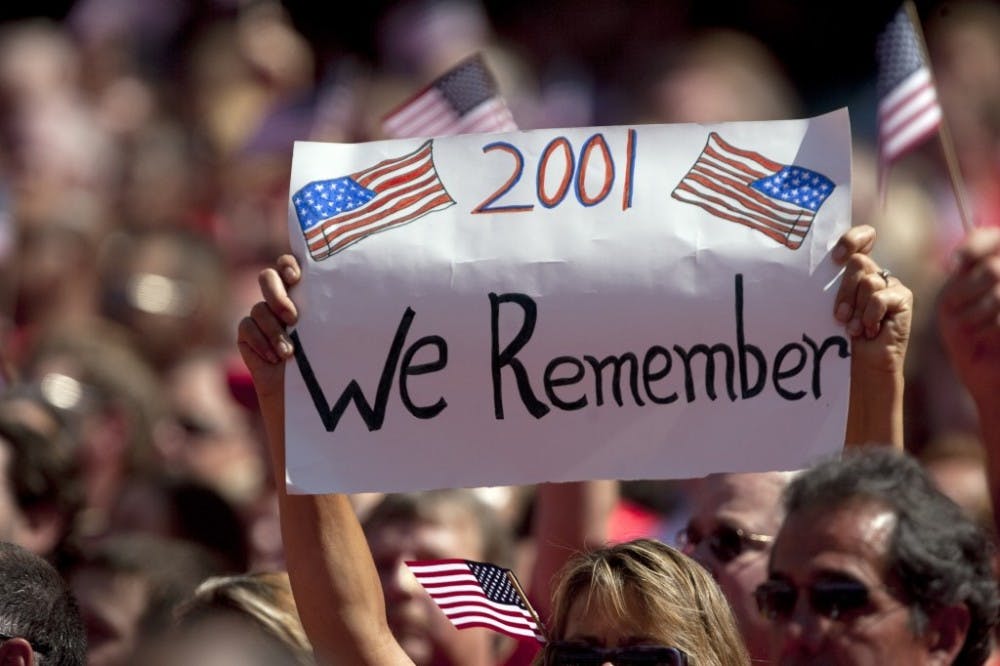 Chiefs fans honored those lost on 9/11 during an NFL game between the Kansas City and the Buffalo Bills. The Bills defeated the Chiefs, 41-7, at Arrowhead Stadium in Kansas City, Missouri, on Sunday, September 11, 2011. (Mike Ransdell/Kansas City Star/MCT)

Jason Kirk was a graduate student in Pennsylvania about to walk into a classroom to teach students about international politics. Over 1,800 miles away in Texas, Safia Swimelar was about to teach an American politics course. Sandy Marshall was getting ready to travel to Belfast, Northern Ireland, where he would study politics with an emphasis on peace and conflict resolution.

These three individuals, now Elon University professors, can answer the question, “Where were you on 9/11?” with the certainty that comes with living through a pivotal, historical event. But 20 years later, many of their students are unable to, and the legacies of 9/11 encompass more than the commonly asked question.

The panel, “20 Years After: The Legacies of 9/11 and the ‘war on terror’” will take place from 4:30 to 6 p.m. in the LaRose Digital Theater. Sponsored by the International and Global Studies program and the Political Science and Policy Studies department, faculty will reflect on the legacies of 9/11 two decades later from their professional and personal experiences.

Swimelar was in the “middle of nowhere” in west Texas when the planes hit the twin towers. She was about to teach a class that, like many things in the United States and the world, would be forever altered by 9/11.

“It was a bit of a remote feeling that I was talking about something so far away, but it was actually good to be teaching American politics at the time, because I felt that I could help students kind of talk through and work through it,” Swimelar said.

Swimelar said while it is important to discuss where people were the day of the terrorist attack, she hopes the panel also addresses the impact 9/11 had on politics and the world in the following 20 years.

“How did you feel, the suffering, the tragedy, we need to do that. That's part of how nations deal with tragic events and memorialize them and pay homage to the people who lost their lives,” Swimelar said. “But I also feel like it's important to go beyond that at a university, to have a more academic discussion with faculty about how this event also was a global event.”

Bringing in the cross-disciplinary perspectives to the panel was a must for Swimelar, who began thinking about the 20th anniversary of 9/11 before the coronavirus pandemic. Swimelar hopes hearing from the perspectives of political scientists, geographers and historians will help students better understand the world they live in.

“We owe it to students to let them know that the things that exist today that they might take for granted, in terms of laws, policies, narratives, practices  — those were not always like that, those directly came from 9/11,” Swimelar said. “Students should know that they exist, and what they do.”

For Marshall, 9/11 also took place far away from where he was. Marshall was getting ready to travel to Belfast, where he would study politics with a concentration on peace and conflict studies. While that day made him reconsider his decision to go across the world for school, Marshall ultimately decided to go to Belfast, where his studies were shaped by the events of 9/11.

“Northern Ireland was going through its peace process at that time too, and I wanted to go out and study that process, to contribute to these efforts,” Marshall said. “Little did I know that we were entering into a new phase of global conflict.”

But when Marshall looks back on the past 20 years, he sees additional impacts globally beyond the personal toll 9/11 took on citizens, such as the war in Afghanistan and “the war on terror.”

“There's still so much that has been forgotten about the immediate aftermath of 9/11 that I think it's really important for students to confront what happened in their lifetime for the last 20 years,” Marshall said.

Even in the last few weeks, Marshall has found himself talking about 9/11 in the context of U.S. troops leaving Afghanistan and negotiating with the Taliban, a similar situation the U.S. was in just one month after 9/11.

“Your generation should be outraged that for 20 years we squandered time and effort and money into a pointless ‘war on terror,’ instead of fighting the real issues like climate change, like creating health care in this country,” Marshall said. “There is just such an opportunity lost and I hope your generation understands that, and changes them.”

Kirk was in Pennsylvania, preparing to teach a smaller group of students. As a graduate student studying international politics, he dismissed his students and went back to the main lecture hall, where he watched the attacks unfold on a screen next to the professor he worked with.

“He just kind of leaned over and said, ‘This changes everything,’” Kirk said. “That's my really vivid memory of that day. Being a student of international politics, that was my field of study. Just to go to class and classes canceled — this changes everything, and it sort of did, it really did.”

Teaching the next generation

As he has taught about 9/11 over the years, the biggest change Kirk sees each year is the decrease in students who have connections to the events from that day. Fewer students have relatives or family who were affected, and this year, most freshmen would not have even been born until after the attacks. For many students, the first exposure they have to 9/11 is in a textbook, rather than living through it.

Teaching about the Middle East for the past 12 years, Marshall has gone from teaching people who have directly experienced 9/11 and students who enlisted in the military right after 9/11 to now, students who have no direct memory of the event. Marshall said that it is often eye-opening for students when he teaches about 9/11.

“For me it's just a weird experience in that 9/11 and the aftermath is so stiff. It's like it happened yesterday, it’s still so present,” Marshall said. “For my students … it's like this concept that they've heard about and they don't really know.”

To help fill gaps in his classes, Kirk said he offers and shares more of his own experiences, but still tries to elicit from students what it means to them, and how it has impacted their life. He also tries to show students how 9/11 may connect to other parts of politics, such as national security or globalization.

“You want to be careful, you know, it's like it can be a gimmick to say this is the root cause of everything, it's not that necessarily,” Kirk said. “But it's just seeing those connections and connecting those dots, hopefully in a way that helps things to click for students a little bit. They can see that it matters in their lives because it continues to have reverberations today.”

The Elon University football team started out hot on Family Weekend with two touchdowns in the first quarter against University of Richmond.