First half blunders turned into second half wonders for the Phoenix 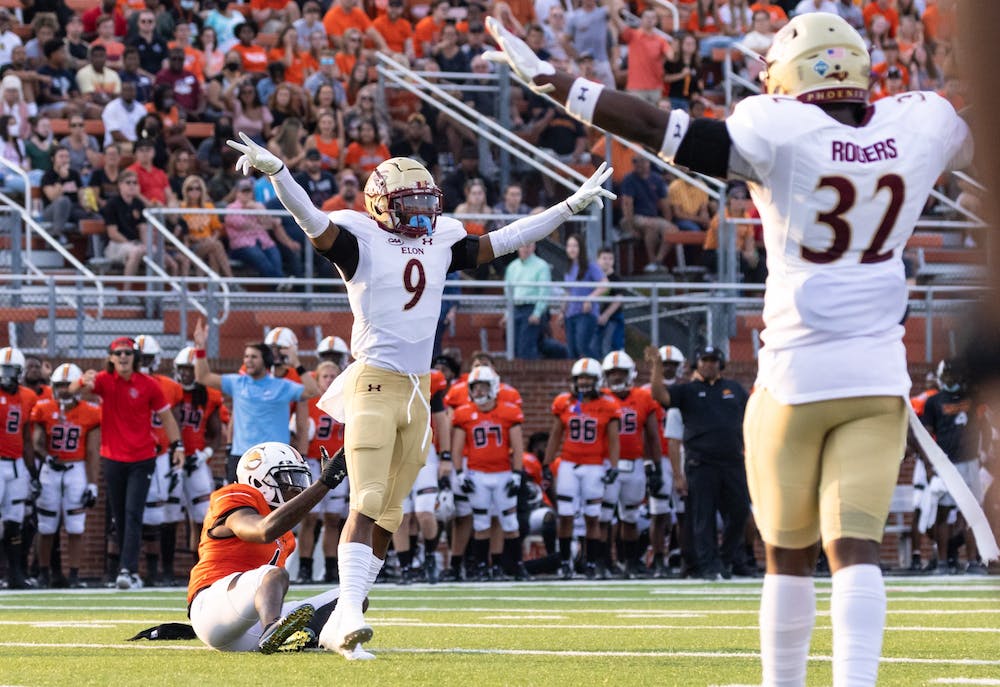 
Despite an unproductive first half, Elon University football came together to earn a win that “the team needed.”

Correction: The first sentence in this article was incorrect. Elon University won its last football game in the sping of 2021, not 2020. Elon News Network regrets this error.

The Elon University football team scraped together it’s first win of the 2021 season and first win since spring 2021, against the Campbell University Fighting Camels, 24-23.

The first half was filled with missed opportunities for the Phoenix, including a blocked punt, a blocked kick, two sacks and a pair of failed fourth down attempts that denied the team from finding it's rhythm. But, despite the unconvincing first half by either team, the Phoenix came out the stronger team on both defense and offense.

Junior running back Jaylan Thomas ended the game with 60 rushing yards and 38 receiving yards. Combined with 269 passing yards from senior quarterback Davis Cheek, the offense came together to create momentous drives that led the Phoenix to it's win.

“We wanted to come out and no matter who was getting the ball, just every time you touched the ball was an opportunity to make a play,” Thomas said. “With Davis throwing the ball and receivers catching and offensive line blocking, we wanted to put our best on film this weekend. It was a tough win, we gutted it out but, in the end, a win is a win.”

Defensively, the Phoenix shined in the second half as well. Sophomore cornerback Tre’von Jones forced two turnovers, picking off Campbell quarterback Hajj-Malik Williams and recovering a fumble in the fourth quarter. Jones also picked up a sack late in the second quarter.

“Tre’von Jones was a big playmaker for us today. Those two turnovers takeaways were big,” Head Coach Tony Trisciani said. “He also did it on special teams too, with his legs on punt returns and kickoff returns, he set us up with some field position.”

All the momentum created by the Phoenix’s defense could have been for nothing due to a late Campbell push in the game’s final minutes. After taking its first lead since the first quarter, Elon was up 24-17 when Williams found redshirt senior Caleb Snead for a 48 yard touchdown pass.

With just over a minute remaining and down by one, the Camels faced a decision to either go for the extra point and push the game into overtime, or try to complete a two-point conversion and play defense to win the game outright.

After taking a timeout, the Fighting Camels lined up to try for a two-point conversion. Williams took the snap, looking for a pass that never came. Williams tried to rush his way into the endzone, but came up short. Elon recovered the onside kick that followed, and went into victory formation to close the final minute of the game.

“It was a hard fought victory, and we needed it. We were a real hungry football team out there today, I’m pleased with our fight and our courage and our grit,” Trisciani said.

For Thomas, he hopes to carry this momentum into next week, and prove that the Phoenix are a team that can win any second half.

The Phoenix will play away again next week against Appalachian State in Boone. Kickoff is set for 3:30 p.m.