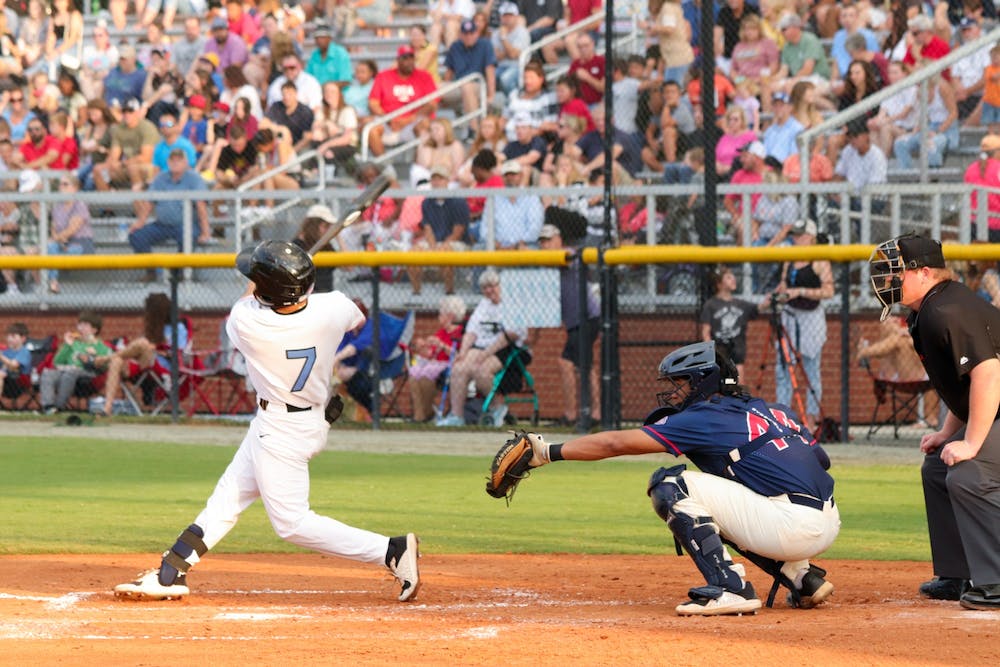 When Burlington’s baseball franchise announced it was rebranding as the Sock Puppets, one prominent figure in the organization did not love the new name — its general manager.

“I didn’t even like it at first,” Anderson Rathbun, general manager of the Sock Puppets, said. “And now I’m over here parading about how awesome it is. I’ve kind of went down the same path a lot of the locals did in the sense that you’re taken aback by it, but as you see it and work with it more and more, it’s just impossible not to love.”

Just seven months ago, the franchise was without an identity. Now, as the organization closes the book on its inaugural season, the revamped team has found a new direction and is becoming both a local and national phenomenon.

“The feedback we’ve gotten from everybody, the excitement people still have now, it’s just been a really cool season to come full circle from last year to here,” Rathbun said.

On February 1, Burlington’s baseball franchise announced it was rebranding as the Burlington Sock Puppets, a tribute to the city’s long history in textile.

Previously known as the Burlington Royals, the team was an affiliate of the Kansas City Royals of Major League Baseball from 2007 through 2020.

However, in September 2020, the MLB and USA Baseball announced that the Royals’ league – the Appalachian League – would become a summer collegiate baseball league and would lose its affiliation with Minor League Baseball.

Rathbun is in his organization’s general manager and helped oversee the franchise’s restructuring and rebranding. He said the organization wanted to create a “community brand” and thus conducted extensive research on the Burlington area and talked with key community stakeholders to help determine a new name.

After a six-month search and a thorough review of over 1,200 names, the organization chose the Sock Puppets as the new name.

Rathbun said the organization expected the reaction to the Sock Puppets name to be “polarizing” among locals. However, the name has caught on with the local community, much to the delight of Rathbun.

“Whereas the industry critics gave widely positive reviews, locals were split at first,” Rathbun said. “The community has definitely warmed up and come around to it. You’re starting to see the success and the positivity of the brand now a year later.”

Sock Puppets fan David Gaddy has lived in Burlington since 2011 and said the city’s baseball franchise has long served as a “hidden gem.” He loves the team’s new name and brand, and believes it is perfect for a minor league franchise.

“When they told us that they were rebranding and they were becoming the Sock Puppets, I was like, ‘What better name could they have picked out?’ I think that was one of the coolest moves that they made,” Gaddy said.

Another significant change for the organization was the Appalachian League’s transition to a collegiate summer baseball league. USA Baseball assigned first- or second-year college players to all Appalachian League teams prior to the season.

The new-look Appalachian League enjoyed great success this season, with MLB Network televising its July All-Star Game, the first time the league’s showcase event has ever aired on the station.

Rathbun liked how the league promoted itself this year and believes it will continue to grow and improve in coming seasons.

“From many facets, I think the league is exactly what we want it to be. And I think this was a great year, one great stepping stone to build off for year two,” Rathbun said.

Dealing with the pandemic

In May, the Sock Puppets organization was preparing to have just 25% capacity crowds at their home games due to national COVID-19 guidelines. However, four days before the team’s opening game in June, they learned they could

increase capacity to 100%. The team developed a COVID-19 readiness plan to keep fans and employees safe at Burlington Athletic Stadium. The team set up hand sanitizing stations throughout the venue and adjusted game many events during games to comply with health protocols. Masks and proof of vaccination were not necessary for fans or team employees.

“Our biggest goal is, regardless of if you’re vaccinated or not vaccinated, if you still wear a mask or choose not to wear a mask, you can still feel safe when you come to the ballpark,” Rathbun said. “We’ve really tried to find ways to attract those people that might not have felt safe in a huge crowd.”

Rathbun said he is thankful the team was able to have fans at games this season, as without revenue from spectators, he knows the team cannot survive.

“If you take out the ability to have mass gatherings, there goes our business model,” Rathbun said. “It was very tough; we didn’t know what to expect at the beginning of the season. But, at the end of the day, when things loosened up, we kind of went full bore.”

The organization is carefully watching COVID-19 numbers in Burlington and surrounding communities and will adjust health and safety protocols for next season as necessary.

“We are actively staying on top of guidelines from both the state and from the federal government and from our local authorities, but as far as the planning side of things goes, it’s just very, very difficult to plan months ahead for something that’ll change every other week,” Rathbun said. “We’re going to make sure that we put in procedures that adhere to whatever is deemed safest for our fans and our community at large.”

Fans are the soul of the Sock Puppets organization, and nothing encapsulates that more than what Rathbun described as his favorite moment of the team’s 2021 season.

Following a 5-3 Sock Puppets victory over the Danville Otterbots on July 4, the team put on a firework show for the nearly 4,000 fans in attendance. As the droves of fans left the stadium after the display, many took time to thank the team’s employees for the fireworks, which Rathbun deemed as an ironic gesture.

“They’re leaving the gates thanking us for the night when, in turn, we were extremely thankful that they chose to spend their holiday with us,” Rathbun said. “Seeing everybody smiling, seeing everybody come together and just having fun was really something special this season.”

Creating a memorable fan experience is crucial for minor league baseball organizations and the Sock Puppets worked hard to deliver family activities and entertaining attractions at their home games.

“When you’re going to a game, it’s not just a baseball game, it really is a show,” Rathbun said.

For their efforts this season, the Appalachian League awarded the Sock Puppets with the Promotional Award, which is given out each year to the franchise with the most outstanding promotional work.

The team hosted promotional nights throughout the season to increase fan engagement. On July 16, the team hosted “Pride Night with the Sock Puppets” along with AlamancePride, a nonprofit organization that serves the LGBTQIA communities in Alamance County. The team raised money for AlamancePride’s scholarship fund and gave the first 300 fans free pride-themed t-shirts.

“We were extremely proud to host that event for the first time in Burlington baseball history,” Rathbun said. “I think we did a great job to be able to show the community that we’re going to make this place inclusive and welcoming to everybody from whatever walk of life.”

David Gaddy attended “Pride Night with the Sock Puppets” with a group from Storied Church in Mebane. He urged members of the church to attend and support the event.

“Wejumpedonitandwekindofencouraged people like, ‘Hey, support this.’ Like, this is super important because this is a pride night in the middle of Alamance County,” Gaddy said. “They embraced everyone that came through those gates that day and just made it an amazing time for everyone.”

The team also held an “Olympics Night,” in which fans competed in Olympic themed events, a “Christmas in July Night” where the team decorated the stadium to resemble a ‘winter wonderland’ and a “Superheroes Night” that awarded prizes to fans dressed as their favorite superhero.

Not only did the team host promotional nights, but it also smashed a world record. On June 5, the team gave the first 1,500 fans a free sock puppet to break the world record of most people in a venue wearing a sock puppet, a record previously set in 2019 when 628 people wore sock puppets at The Blue Coat School in the United Kingdom.

Gaddy, a father of two children, said the Sock Puppets do a good job of creating an enjoyable atmosphere at games through themed promotional nights, in-game entertainment options and special vendors.

“Their ballpark creates a safe environment and they are getting kids interested in what baseball is about,” Gaddy said. “They’re also providing in-game entertainment that kids can participate in, but the adults can get involved in too. So, giving things for adults and kids to do while providing that safe environment has been really, really good.”

According to Rathbun, the team increased its attendance numbers by approximately 35 percent from 2019 and nearly 50 percent from 2018. Additionally, the organization increased its following on Twitter from nearly 8,000 followers to over 13,000 and went viral on national news platforms thanks to their zany name, logo and mascot.

“I would say it was a wildly successful season,” Rathbun said.

While the Sock Puppets enjoyed a stellar debut campaign, Rathbun believes there is still plenty of room for growth. He said among the organization’s goals for next season are growing the fanbase and selling more tickets and ticket packages.

Gaddy looks forward to attending more games in the future and hopes that the team can continue to create and maintain a positive environment at the ballpark.

“The continued family friendliness of the venue is super important,” Gaddy said.

Rathbun believes the organization has a bright future and looks forward to building the Sock Puppets brand in the Burlington community.

“The sky’s the limit, I believe, here in Burlington,” Rathbun said. “It’s a very unique community that loves what is theirs.”