Dr. Ginette Archinal spoke with Elon News network about the coronavirus on campus and within the community 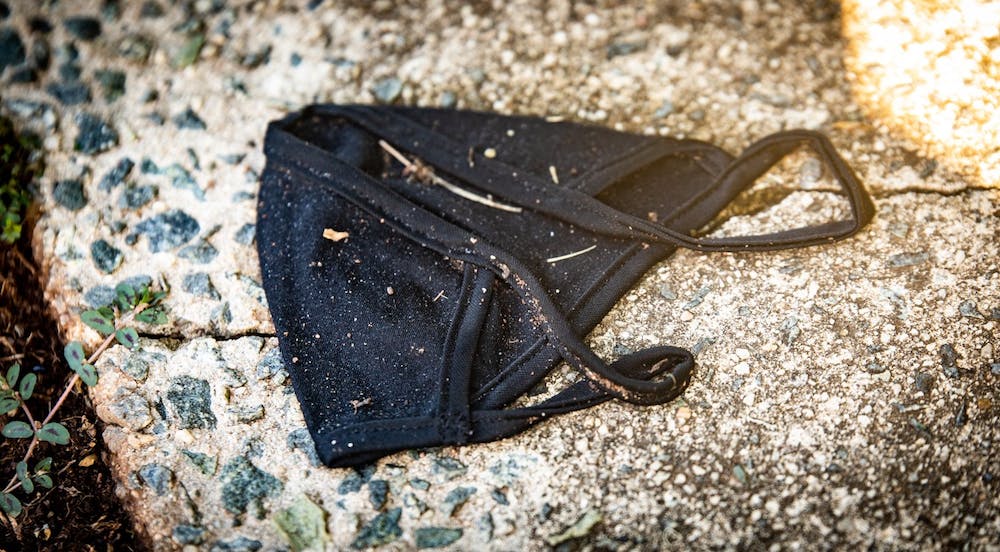 
A mask is strewn across the sidewalk on E. Lebanon Ave.

The Delta variant, the efficacy of the vaccine and masking — as the pandemic continues, there are still questions as to what the future holds. Elon University Physician Ginette Archinal said while there is still uncertainty, the nature of this virus requires flexibility, and is what will keep the campus and community safe.

“If you don't change frequently, if you're not flexible, then you're missing something,” Archinal said. “You're either being too restrictive, or too cavalier with people's health.”

Archinal spoke with Elon News Network about the Delta variant, why masking is still an important mitigation strategy and what coronavirus can look like on campus going forward.

Can you tell me a little bit about the Delta variant? And what makes this Delta variant so much different from other variants?

Great question. Delta is the variant we didn't want. We have had multiple variants before Delta, and there are variants after Delta. The difference about Delta is it is considerably more contagious. And there are some issues around its contagion. But the real bottom line is, it's much more contagious, so more people are going to get sick, die, end up in hospital, if exposed unvaccinated, than they are to any of the other variants.

Could you talk a little bit about why wearing a mask and even if you are vaccinated is an important precautionary measure that municipalities and universities are taking?

Absolutely. If we talk about protecting a community from an outbreak, a major outbreak of disease, which is really what we're talking about, we have certain strategies we can do to reduce the spread of that disease. If we have a good vaccine, that's definitely number one, and we are lucky enough to have that. We also have to be realistic and appreciate that no vaccine is 100% perfect, and there's almost no scenario in which every person is going to be vaccinated. When you have control of your environment, for example, in a normal situation, with just people going to class where we know that we have students vaccinated in the above 90%, faculty and staff in the high 80s at this point, both these numbers are actually improving — that's a different situation from when a lot of people are coming to campus who may or may not be vaccinated, because those people may have lots and lots of virus to transmit. Assessing from a normal situation, like in a classroom where practically everybody's vaccinated, even if somebody in there has [the] virus, it's not going to go very far. So, given that we can't control other people's vaccinations, when they're visiting campus, we go to the next best thing, which is masks.

Masks are, you know, obviously annoying when it's hot. But honestly, there's such an easy thing — you put it on when you're inside when you're around people, you're outdoors, in an empty field, you take it off — it's actually much easier than getting a vaccine or looking for hand sanitizer. So, while it's annoying to have to do it, if you're vaccinated, it's such a simple procedure. And if it protects one person from death, it's worth it.

Well, you probably remember last year, on the Ready and Resilience site that we had the numbers, who were tested positive on our surveillance testing, or symptomatic positives. If those numbers start going up again, we've been tracking them over the summer, but they will be on the dashboard, again, so that's number one. Read the Healthy Elon site, the answers to a lot of everybody's questions are actually on there. It's a lot more informative than people expect it to be. But those numbers will be tracked. So, number one, look at that.

The other thing [to] be aware of, as I said earlier, what's going on on campus in terms of if it's moving, if it's family weekend, if it's homecoming. That’s something people should look out for. Because that could also cause a cluster outbreak on campus. So, be aware of things outside your own little bubble.

I think we all live in our bubbles, and I think COVID made us live in our bubbles. There was a lot of fear. Last year particularly and we all very much stayed in our own little cohorts, we all needed our pandemic bubble. And that was the right thing to do at that time. We didn't have vaccines, and because we were still learning about the virus, we know so much more now that we individually have a lot more control over whether we are exposed, whether we expose other people, what environments may be more of an issue than others.

I wear a mask when I go to grocery stores. Not because it's mandated. But because I'm in a grocery store, in a community where the vaccination rate is not terribly high. That's a choice I make. It's some control I can have.

Do you think there's more planning and more looking ahead we can do this year?

I will tell you even last year, there was a lot of looking ahead in planning. The problem is, when you're responding to something that you have no control over, like a virus or pandemic, you have to change day by day. If you don't change frequently, if you're not flexible, then you're missing something. You're either being too restrictive, or too cavalier with people's health.

So, I would tell people to expect changes, I doubt that there will be as much as frequently as last year, again, just because we know so much more than we did a year ago. But anybody who thinks that everything's going to be exactly the same every week, this semester, next semester, they're fooling themselves. Because the virus will do what the virus does. And we have no control over that.