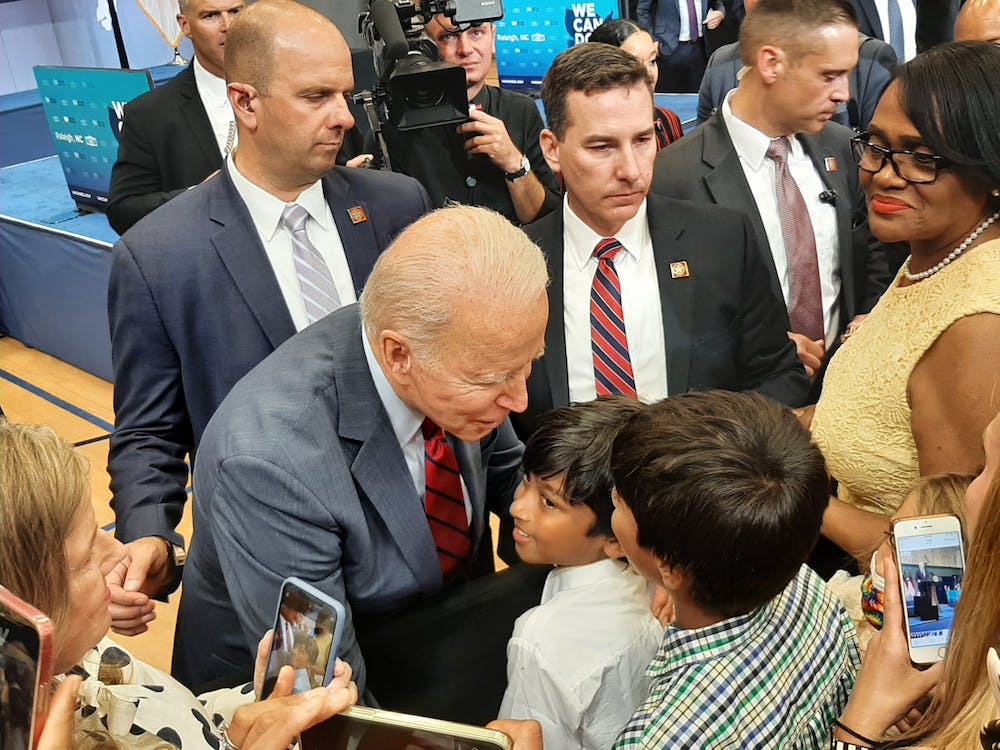 RALEIGH — President Joe Biden visited Raleigh on June 24 to discuss vaccination efforts in North Carolina. The president’s stop in the state is part of his “National Month of Action,” which calls for a nationwide sprint to get 70% of U.S. adults at least partially vaccinated by July 4.

Gov. Roy Cooper took the stage before Biden, talking to the crowd about the vaccines and the American Rescue Plan Act Fund. The funding can be used for infrastructure, such as broadband access, water and sewer. The state of North Carolina received $1.3 billion from the fund.

“During this pandemic, we used science and data to make hard decisions,” Cooper said. “North Carolina is among the lowest in deaths, and job loss per capita, and that's a good thing.”

Even though Jones was, like many college freshmen, disappointed by a remote first year experience, she said she knew her sacrifices were keeping her family safe. Jones’ father is in the army and her mother has a serious respiratory condition.

“Now that we have safe and reliable vaccines available to us, it is imperative that we do our part to stop the spread of COVID to usher in this new phase of the pandemic,” Jones said. “We should rejoice in the ability to see our friends and family again, but not predict the pandemic is not over.”

Biden began by reminding those in attendance of how many people have died due to the coronavirus pandemic. According to the Centers for Disease Control, 593,041 deaths have involved COVID-19 since the onset of the pandemic.

The nation still lags behind Biden’s goal of 70% of U.S. adults vaccinated by July 4. As of June 21, 65% of the adult population and half of the total U.S. population have received at least one dose of the COVID-19 vaccine. The Federal Emergency Management Agency has allocated approximately $4.9 billion to support vaccination efforts. North Carolina has received over $105 million to support vaccination efforts as of June 21.

“I call June the month of action so we can all enjoy the fourth of July with our independence from the virus,” Biden said.

Rohan Vora, 11, can’t get the COVID-19 vaccine quite yet. But that didn’t stop him from enjoying Biden’s remarks on the U.S. vaccine rollout. Rohan and his brother Chetan, 10, were among those in attendance at the community center.

“He’s really nice,” Rohan said of Biden. “It was a long wait… it was cool to see the president. I’ve never seen a president before.”

Chetan said he was excited to see Cooper, who spoke before Biden this evening, because he had never seen Cooper in-person before.

As Biden left the building, he stopped with the two boys and chatted, snapping selfies and giving them $10 — for ice cream, of course.

Amos Walker received a phone call from his manager on his day off. Walker expected to be called into work, but instead, his manager made him a different offer.

“The conversation kind of went like, ‘hey do you want to go see the president?’ and I’m like ‘what President?’ and they said ‘Joe Biden,’” Walker said. “I'm like, ‘oh, the United States President? Yeah, I’ll go.’”

Walker is a registered nurse at WakeMed Health & Hospital in Raleigh and was one of several staff members invited to hear Biden speak. Walker, who has been at WakeMed since 2008, worked in the COVID-19 unit during the pandemic.

“It's good that they're having conversations about promoting vaccinations,” Walker said. “But I think a lot of us had a particularly strong sentiment, early on.”

As a healthcare worker, Walker received his first dose of the COVID-19 vaccine in December. While he said he understands everyone has to make the decision for themselves when it comes to getting the vaccine, Walker said he thinks everyone has a part to play in getting “back to normal.”

“I don’t think you can just be passive and hope that it gets taken care of,” Walker said. “You hear that all the time, you know, what can we do for you? I don’t know, but do your part. You can’t stand neutral.”

Bayle Cheatham lives in the neighborhood near the community center and said she is still thinking about whether or not she wants to get her COVID-19 vaccine. She said hearing Biden speak today could sway hers and others’ decisions regarding the vaccine.

“You hear things from people saying that you shouldn't get it and then you hear other things that people say you should, so then it's kind of like you're in the middle of well, is it a good idea? Is it a bad idea?" Cheatham said.

To increase vaccination rates, there is a $4 million “Summer Cash Drawing,” and Gov. Roy Cooper has put over $2.5 million into local transit agencies to help pay for rides. There is also a mobile unit program to help those who are home-bound and a full-time call center dedicated to registering North Carolinians for vaccinations.

Joining a growing number of schools in North Carolina, Elon University announced on June 17 that all students must submit documentation of vaccination for the fall semester and all faculty and staff are encouraged, but not required, to get vaccinated as well. The university is one of ten institutions in North Carolina to do so, according to the Chronicle of Higher Education.