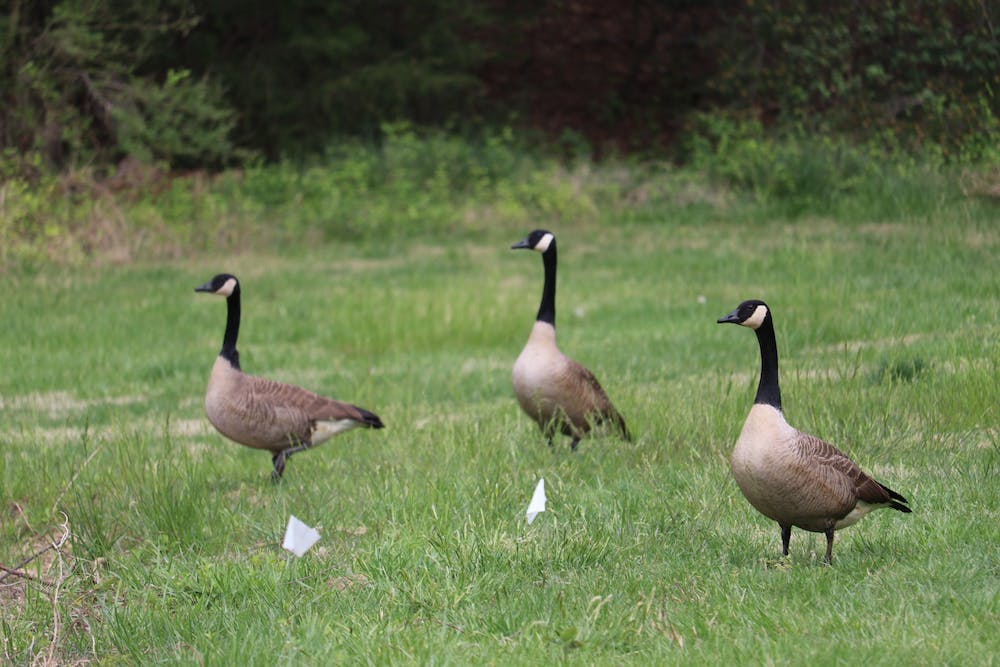 Elon has a goose problem. It’s not that the fowl act overly foul, but take a gander around the university and you’ll see — and possibly smell and step in — their presence at the various campus lakes.

Enter the Geese Police, an organization that began working on campus two months ago to remove the geese who have taken up residence at both Lake Mary Nell and Lake Verona. Goose nesting season takes place from the end of February through May, but the Geese Police come to campus year-round because their work is similar to a landscaping service.

“This is a very busy season. They get very stubborn when it’s nesting season because their brain tells them, ‘I nested here last year, this is where I’m going to nest this year,’” Geese Police dog handler Mary Beth Soto said.

Director of landscaping and grounds Scott Stevens said Canada geese can also be rude, noisy, bold and sometimes aggressive around community members, especially if they have baby goslings. He said the geese have become a nuisance on campus over the past decade, and the university began using contractors who rely on border collies for Canada geese removal in 2003.

Stevens said if the geese population were allowed to persist, the result of their constant grazing and debris would cause several maintenance issues, as well as possible health issues. Soto agreed that she and her team see a lot of goose droppings near the water.

“Each bird will leave a pound and a half of droppings a day, so that’s a lot of a lot of waste,” Soto said. “It can carry giardia, which is a bacteria that will cause amazingly tragic diarrhea and intestinal infections in dogs and people, so it’s very important to not have geese on your property.”

Soto said she doesn’t like it when her dogs roll in goose droppings, but it is sometimes effective because they end up smelling like the geese and can sneak up on them without the geese smelling them right away. The droppings also allow the dog handlers to tell when the geese were last on campus so they know what time to return the next day.

Herding the geese is a process which typically consists of two to three years of bothering the geese in a particular place before they fully relocate. Geese Police’s work is backed by People for the Ethical Treatment of Animals, and Soto said they work within nature.

Working with the geese is all about imprinting, a form of learning in which an animal gains its sense of species identification, which is why the Geese Police visit Elon’s campus and their other clients every day. The geese return to the same locations often, so they have to be taught to avoid the area.

Border collies become “predators” to the geese and were originally bred to herd livestock, but, as Goose Masters dog handler Gwen Kuykendall said, the dogs are famous for using the “eye” — a tactic that involves staring intensely at members of a gaggle of geese to intimidate them.

“It’s a stalk-like gaze,” Kuykendall said. “They use their eyes, and that mesmerizes the geese into flight both on land and in the water. So the dogs, they go around and they herd, basically. It’s not a chase, it’s a very methodical, professional approach to working the geese.”

She said the geese feel the presence of the dog, get unnerved and fly off. It’s about getting the geese to move on rather than catching them. Kuykendall and her Goose Masters team previously handled the geese at Elon before Geese Police, and she said getting them to move away from Lake Mary Nell was the hardest part. Now, it’s more about maintenance.

“Sometimes we’ll find them grazing on the common areas,” Kuykendall said. “They like to pluck up the new grass if, you know, there’s some seeded areas with straw. They tend to gravitate towards those little areas.”

Stevens said the border collie is the choice breed and an environmentally safe way to control the geese in a campus environment. Both Kuykendall and Soto said people love to see the dogs work and they find the Elon community friendly. Soto said she uses Scottish commands when working with the dogs because they aren’t known as well as “sit” or “stay,” but the dogs still get distracted and visit with students on the job.

“The idea being nobody’s supposed to be able to tell your dog to calm or sit or anything, but they’re dogs. If a person pays attention to them, they’re gonna go over there,” Soto said.

Both companies feel like they are “doing justice” to both the Canada geese and the Elon area. They try to move the geese to safer areas during nesting season because Elon is busy and sees a lot of traffic.

“If they hatch, they’re walking in the parking lot and they just walk so slow and I’ve seen people run them over on purpose before,” Soto said. “The reason we do this job is we not only love the dogs, we love the geese, and we see the same ones every year.”